September 2016 was a record-breaking month for the online used-equipment marketplace with 5,900 bidders, 23 auctions and total gross merchandise volume of more than $99 million 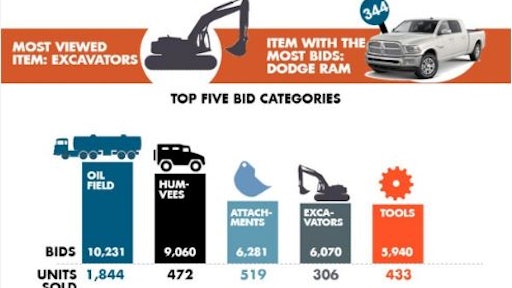 September 2016 was a record-breaking month for online used-equipment marketplace IronPlanet, with 5,900 bidders, 23 auctions and total gross merchandise volume of more than $99 million.

Online used-equipment marketplace IronPlanet broke records with its 23 September auction events with more than $99 million in sales on 9,890 items.

“September, 2016 was a record-breaking month, for the number of auctions that we held, the total number of bidders and buyers, as well as the total gross merchandise volume of over $99 million,” said Gregory Owens, IronPlanet chairman and CEO. “This is no doubt that we were able to achieve these stellar results due to our advanced data-drive technology platform, the power of our multiple online marketplaces, robust on-site auction events and the global reach of our more than 1.5 million registered users worldwide.”

A global community of buyers and sellers representing 84 countries participated in IronPlanet’s September events, with 34% of auction items receiving international bids. International buyers purchased 1,519 items. After the U.S, Canada and Mexico, Great Britain was the most active bidding country.

Texas was the U.S. state that sold the most items as well as the state that bought the most.

Ritchie Bros. to Acquire IronPlanet for $758.5 million in Effort to Accelerate Its Diversification Strategy