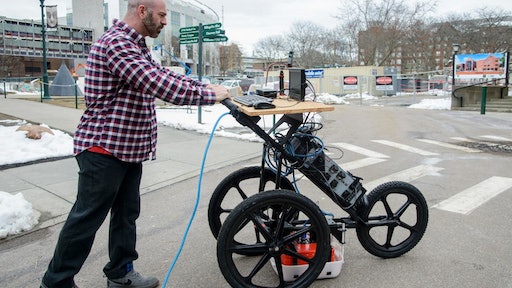 UVM post-doctoral student Dylan Burns demonstrates how the cognitive ground penetrating radar apparatus could be wheeled over an area to scan and map underground infrastructure. The GPR unit, housed in the box near the ground, can peer six to 12 feet down.

Researchers at two universities are pairing ground-penetrating radar (GPR) with a cognitive, smartphone-based augmented reality app so that users can see virtual 3-D models of underground objects but also have access to a visual map of subsurface infrastructure that the app stitches together based on a network of previous scans.

(more about GPR maps available in virtual reality on site . . . )