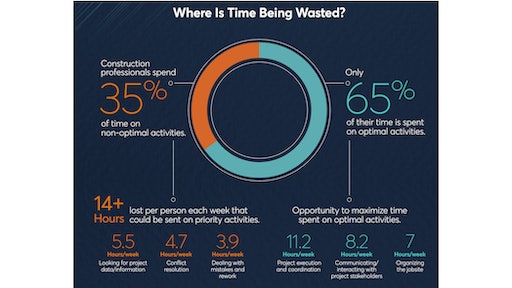 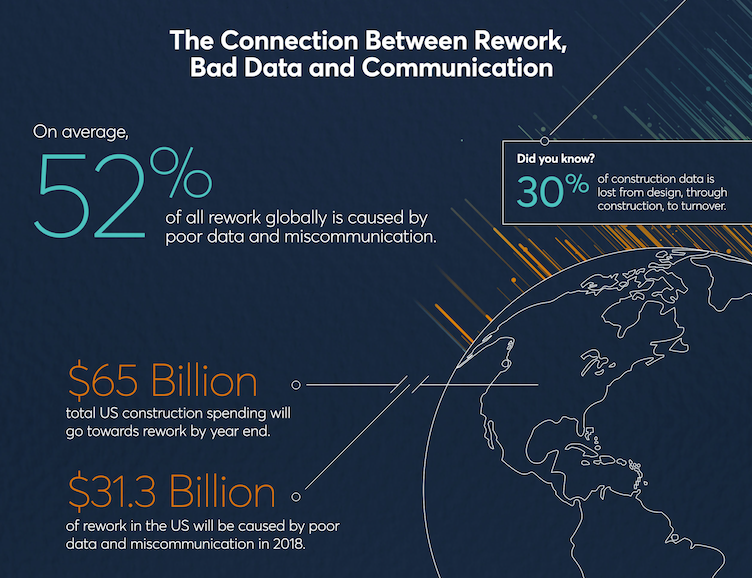 PlanGrid/FMIof nearly 600 construction leaders about how teams spend their time on construction sites, communicate during projects and leverage their technology investments. The survey indicates that time spent on non-optimal activities such as fixing mistakes, looking for project data and managing conflict resolution accounts for $177.5 billion in labor costs per year in the U.S. alone.

The study also found that rework caused by miscommunication and inaccurate and inaccessible information will cost the U.S. construction industry more than $31 billion in 2018.

Each construction project team member spends more than 14 hours each week on average dealing with conflict, rework and other issues that take away from higher priority activities, according to the survey. Respondents revealed they spend the following amount of time each week on non-optimal activities including: 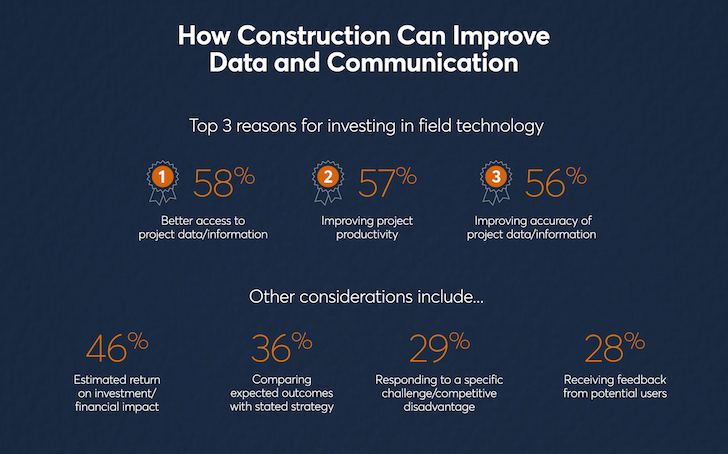 PlanGrid/FMIDue to time spent on these non-optimal activities, the industry will lose an estimated $177.5 billion in labor costs in 2018, which could equate to costs exceeding $2 billion per year for the average mid-sized construction company.

Almost half of all rework is due to poor communication among project stakeholders, and poor project information.

Miscommunication and poor project data account for 48% of all rework on U.S construction jobsites. Respondents attributed 26% of rework to poor communication between team members.

The top three causes of miscommunication are unresponsiveness of team members; the inability of project stakeholders to collaborate effectively; and the lack of a common platform for all team members to communicate and share project data.

Respondents also said 22% of rework is due poor project information, where the top three causes are erroneous or incorrect project data, difficulty accessing project data and the inability of project stakeholders to easily share information about the project.

Workers are not taking full advantage of mobile devices and IT investments. 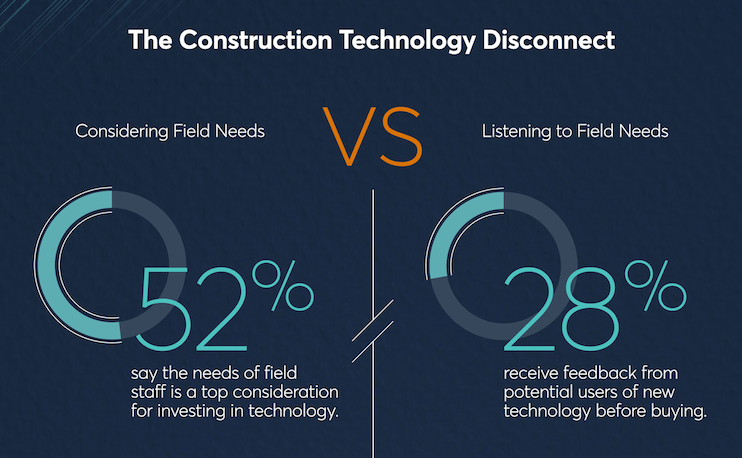 PlanGrid/FMIMore than 75% of respondents provide mobile devices — smartphones or tablets — to their project managers and field supervisors. However, less than one-fifth of companies consistently (more than 80% of the time) use apps aside from just email, text and phone calls to access project data and collaborate with project stakeholders. This finding suggests many construction leaders are equipping field teams with technology, but aren’t getting maximum return on their investment by leveraging mobile software and apps purpose-built to help construction companies reach their full potential.

Technology is expected to improve data management and increase productivity.

According to the survey, executives are investing in technology for reasons that directly reflect the challenges associated with data integrity and accessibility, and overall demands for increased productivity. More than half of survey respondents shared the most common goals for technology adoption include providing better access to project data (58%), improving project productivity (57%) and increasing the accuracy of project information (56%). 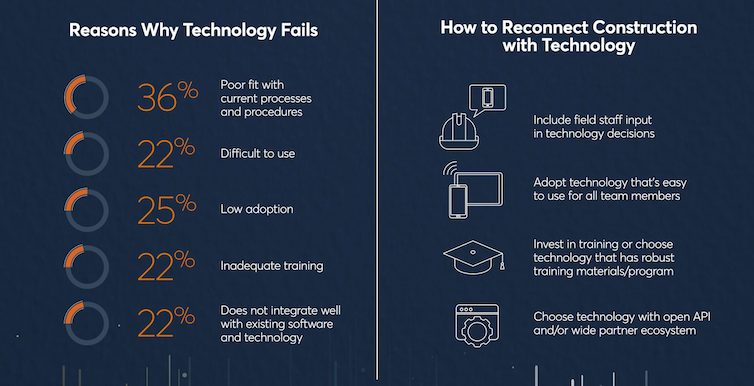 PlanGrid/FMI“Poor communication among team members, and incorrect or inaccessible information that workers need to do their job is costing the construction industry tens of billions of dollars annually,” said Jay Snyder, FMI technology practice lead. “The majority of industry stakeholders seems to be at a loss for how to remedy these systemic and expensive problems. While construction firms continue to invest in technology, the business-critical issues of communication and data management need more strategic attention than they currently receive.”

“Construction companies are investing in mobile devices, but many teams are still relying on simple text and email rather than tapping more robust technology to collaborate and access project information,” said Stuart Frederich-Smith, vice president of product marketing at PlanGrid. “This proves a significant disconnect between the purchase of construction technology and the adoption of this technology in the field, and reveals the need for end users to be included the decision making process. Teams that have easy-to-use tools to collaborate in real-time, a central source of truth and access to relevant data when they need it will have a greater competitive advantage.”
More details:

In April 2018, FMI Corporation partnered with PlanGrid to survey nearly 600 construction leaders and decision makers to discover how teams spend their time while on a jobsite, challenges associated with poor data management practices and miscommunication, and their technology investments. Participants in the study included 599 construction industry leaders.

The sample was composed of 500 respondents from the United States and 99 from Australia, New Zealand, United Kingdom and Canada. Of those surveyed, 49% work for general contractor firms, 36% came from specialty trades and 15% were owners. Over 300 respondents came from the commercial sector and the other respondents represent industrial and manufacturing, heavy civil, healthcare, power (oil and gas, and energy), education and government. 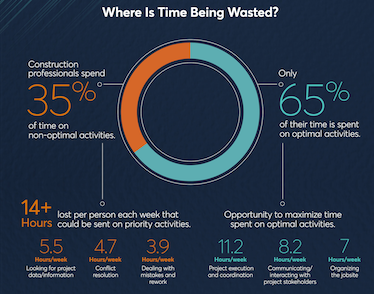 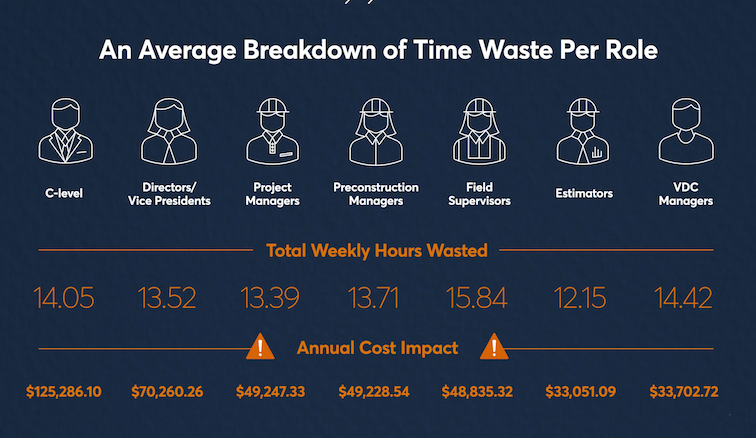 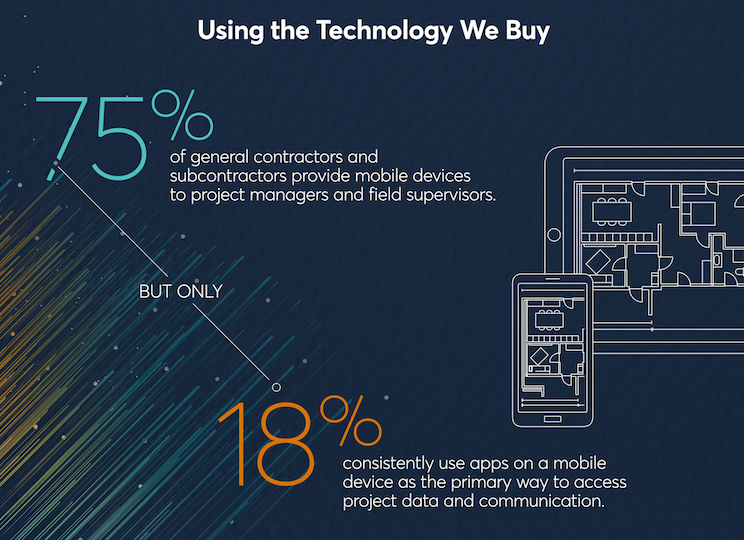 Peer Executive Groups provides rental companies with reports on Sales Growth Rates, Employee Productivity, Cash, Debt, and the ability to compare themselves with other rental businesses based on ARA region, number of locations, or sales volume.
Peer Executive Groups
November 30, 2020
Follow Us