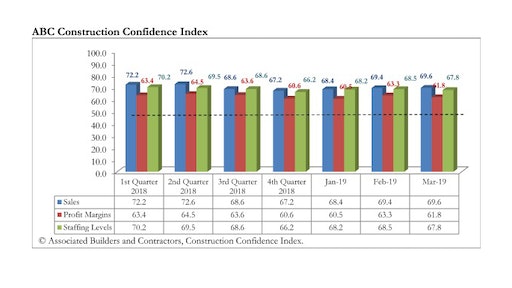 All three principal components measured by the survey — sales, profit margins and staffing levels — remained well above the diffusion index threshold of 50, signaling ongoing expansion in construction activity. While contractors are slightly less upbeat regarding profit margins and staffing levels than in February, more than 70% of contractors expect to increase staffing levels over the next six months, a reflection of continued elevated demand for construction services. Despite rising wage pressures, more than 56% of survey respondents anticipate rising profit margins, an indication that users of construction services remain willing to pay more to get projects delivered. 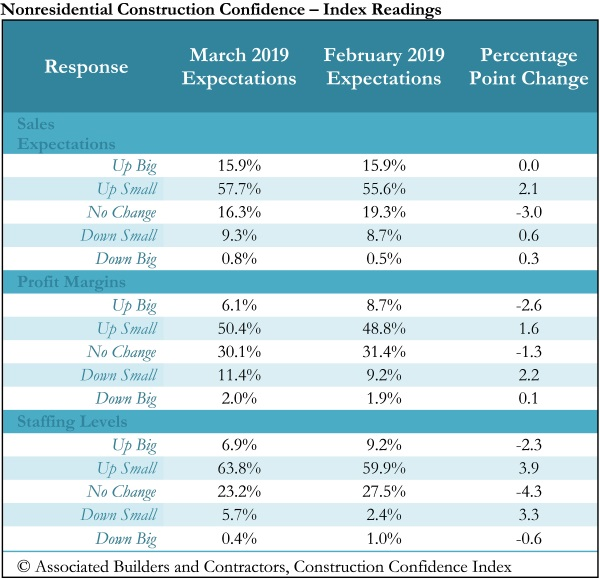 Associated Builders and Contractors“Last year, the U.S. economy grew 2.9%, and it expanded an additional 3.2% during the first quarter of 2019,” said ABC Chief Economist Anirban Basu. “All of this is consistent with the notion that demand for nonresidential construction services will remain elevated for the foreseeable future. The CCI findings are also consistent with ABC’s latest Construction Backlog Indicator report, which revealed that many contractors have a growing number of projects in their pipeline.

“A major source of influence on the data is the reemergence of public construction spending,” said Basu. “With nearly 10 years of economic expansion complete, many state and local governments are experiencing their best fiscal health in years, resulting in more funds to invest in roads, transit systems, schools, fire stations and police stations. The combination of spending growth in certain private construction categories and rising infrastructure outlays will keep the average American nonresidential contractor scrambling to retain and recruit workers, especially in the context of a national rate of unemployment effectively at a 50-year low.

“It should be noted that the most recent CCI survey was completed prior to the turmoil associated with the trade dispute between the United States and China, which may impact contractor confidence,” said Basu. “While global investors have exhibited concern, most construction activity involves U.S.-based enterprises providing services to U.S.-based customers, minimizing unease. That said, the imposition of tariffs has the potential to raise costs of equipment and other inputs, which could at least conceivably impact profit margins. Moreover, market turmoil can truncate the availability of financing to prospective construction projects.”

Brad Humphrey and the Caterpillar experts dig into how to maximize the ability of your construction equipment by leveraging the knowledge and services of Caterpillar dealers.
Caterpillar - Cat
August 12, 2020
Follow Us