Both public and private nonresidential construction spending dropped at the end of 2019. 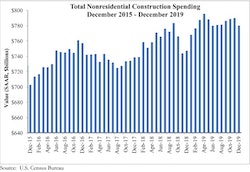 National nonresidential construction spending declined 1.2% in December 2019 but is up 4.4% on a year-ago basis, according to an Associated Builders and Contractors (ABC) analysis of U.S. Census Bureau data. On a seasonally adjusted annualized basis, spending totaled $779.6 billion in December. 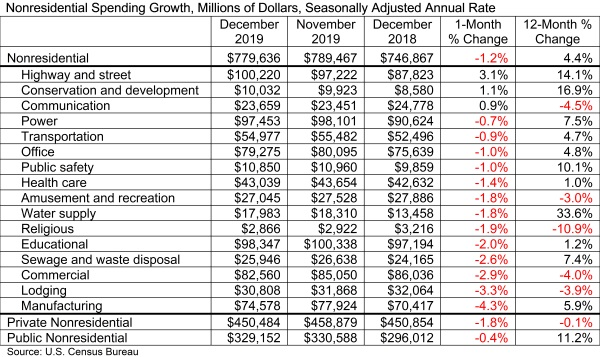 “But in recent years, private construction spending volumes have stopped growing, and in certain instances have been shrinking,” said Basu. “That was the situation in December, with nonresidential construction volumes in segments like commercial and lodging down on both monthly and year-ago basis. Spending on office construction, a category supported in part by the ongoing development of data centers, also slipped for the month.

“Meanwhile, improved state and local government finances continue to help perpetuate the public construction spending cycle,” said Basu. “With income tax collections rising as more people find jobs and secure raises, property tax collections having recovered and sales tax collections climbing in conjunction with consumer spending, there is more money available for many public priorities, including infrastructure. A majority of states raised gas taxes during the previous decade, generating even greater financial support for public construction. Accordingly, the infrastructure category of ABC’s Construction Backlog Indicator has been elevated in recent months, ABC’s Construction Confidence Indicator shows that contractors remain upbeat, and many public segments have experienced double-digit growth in construction spending during the past 12 months for which data are available, including highway/street, water supply and public safety.”

Construction releases can be an advantage for contractors, if you understand them and know how to use them correctly.
Alex Barthet
March 10, 2021
Follow Us