Aerial work platforms (AWPs) account for a small percentage of all accidents related to work at height. But what are the main causes of AWP accidents and why is accident reporting so important in the quest for safety? 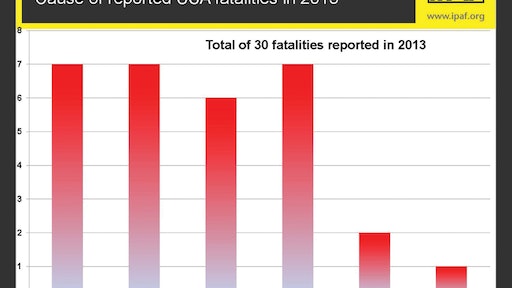 The main causes of reported AWP fatalities in the USA

The industry is getting better at reporting accidents through IPAF’s voluntary program. According to preliminary results from IPAF’s accident database, there were 53 fatalities worldwide in 2013 involving aerial work platforms (AWPs).

Almost half of the number of reported fatalities (26 or 49%) involved self-propelled booms (3b). Fourteen fatalities (26%) involved mobile verticals/scissor lifts (3a) and 11 (21%) involved static booms/vehicle-mounted or towable (1b). In two cases (4%), the type of machine involved was not known.

Thirty (57%) of the fatalities occurred in the U.S., home of 54% of the world’s rental fleet. Three fatalities each were reported in Germany, Spain and the UK, two fatalities each in Belgium, Canada, France and the Netherlands, and one each in Armenia, Australia, Ireland, Malaysia, Norway and in the Middle East.

IPAF’s accident reporting project was launched in January 2012 and has filled a gap where there was previously no single mechanism for reporting and analyzing serious accidents involving AWPs and no definitive data on the number and main causes of fatal accidents. In the first year of the project, 32 fatalities worldwide involving AWPs were reported.

Chris Wraith, IPAF technical & safety executive, stresses that the accident project is still in an early stage and cautioned against direct comparisons in its second year. “It will be at least 2016-2017 before any realistic year-on-year comparison on the frequency of accidents can be of value,” he says. “The comparative figures presented are for information only and do not in any way suggest an increase in the number of AWP-related fatalities from 2012 to 2013. They are more an indication that the awareness and success of the reporting project is growing. Powered access is probably the safest way of performing temporary work at height. The industry is becoming more aware and reporting accidents, rather than having more accidents.”

Awareness of this ground-breaking project is growing worldwide, as is the number of countries, companies and individuals contributing to it. There are currently 249 registered users across 33 countries and 201 companies who have committed to report all AWP-related accidents involving their employees. There is a mechanism to make anonymous reports should people wish to do so. Over time, IPAF’s project aims to capture more comprehensive data and to draw more useful comparisons and conclusions.

Wraith is convinced that accident reporting is central to making powered access even safer worldwide. “Companies are often reluctant to share accident data, but the AWP industry can become stronger if it bases its activities on evidence and evaluation,” he says. “By measuring incident data, we can manage safety initiatives, learn from past mistakes and change cultural mindsets that might be hindering best practice. Equipment manufacturers, contractors and end users can all benefit from the insights gained.”

IPAF’s accident reporting project is creating a comprehensive record of known accidents. Data gathered enables IPAF to analyze and look for common trends, and propose possible actions to further improve and promote the safe use of powered access worldwide. Data collected is kept confidential and used solely for the purposes of analysis and making recommendations to improve safety.

The data presented is based on accidents reported directly to IPAF, information obtained by IPAF staff worldwide and through information collated from various news media. The accuracy of the data cannot be guaranteed, but where appropriate, action is taken to verify the facts and the data is amended should relevant information become available.

IPAF rental company members in the UK have voluntarily committed to report any known AWP accidents involving their staff via the IPAF accident database. All manufacturers, rental companies, contractors and users are encouraged to report any known fatal and serious accidents involving aerial work platforms and mast climbing work platforms worldwide at www.ipaf.org/accident