Tasked with the job to remove approximately 8,600 square feet of ceramic tile from a private college pool measuring 13.6 feet deep, Ashwill knew there were long days and a lot of work ahead of him and his crew. 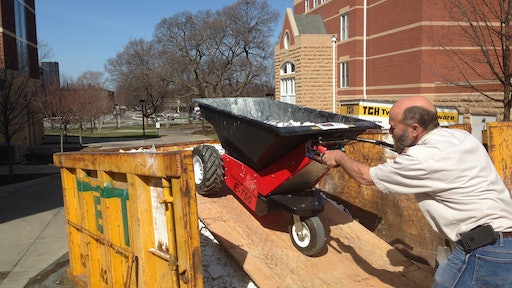 Tasked with the job to remove approximately 8,600 square feet of ceramic tile - roughly 50,000 pounds of material - from a private college pool measuring 13.6 feet deep, Ashwill knew there were long days and a lot of work ahead of him and his crew.

Removing material from a swimming pool is a tall order due to its deep body and steep slopes. One option would be to manually carry buckets, however, this is very inefficient and demands heavy labor. Workers are required to not only walk down into the pool, but also carry heavy loads up the steep incline. Ashwill also considered renting a stock chaser for the project, which is an electric-powered work vehicle designed to carry large loads. While the stock chaser would be optimal to handle the large quantity of tile, it did not have the maneuverability needed to climb in and out of the pool and access the hard-to-reach corners.

Fortunately, Ashwill had recently heard about a new product, the Power Pusher electric wheelbarrow, from a neighboring construction services firm, McGough. After speaking to McGough about the product’s capabilities and doing some additional research online, Ashwill wanted to test the wheelbarrow for himself.

“I looked at the electric wheelbarrow online and thought, yes, this is exactly what I need,” said Ashwill. “I called Ryan Blesi at Nu Star Inc., and asked if I could have it yet today. Ryan picked it up from McGough and brought it right over.”

Using a 23-foot ramp, five- to zero-feet on the shallow end of the pool, the Power Pusher electric wheelbarrow easily climbed up and down the sharp inclines.

“The ramp was really steep, and really slippery, but the electric wheelbarrow went up smoothly with no problems at all,” said Ashwill.

In addition to carrying heavy loads, the electric wheelbarrow eliminates the unnecessary ergonomic challenges and production halts associated with traditional wheelbarrow solutions. It easily reaches compact spaces to ensure all material is completely removed. Offering a bucket capacity of nine cubic feet and powered dump, users can also haul large loads in one pass. Further, the wheelbarrow can run for a total of five miles on a single charge with its rechargeable battery, reducing downtime.

“The Power Pusher electric wheelbarrow is a gold mine in terms of performance,” said Ashwill. “It really made this project easier and faster—it surpassed my expectations.”

While the electric wheelbarrow increased Ashwill’s crew productivity, it significantly reduced their labor by eliminating the pushing, pulling and lifting required with other wheelbarrow solutions.

“Other wheelbarrows may be less expensive, but the Power Pusher model easily makes up for the cost in saved labor and efficiency,” stated Ashwill. “I can confidently say I saved $4,000, at a minimum, in labor on this job alone.”

“I can’t see any other comparable product performing better in this industry,” said Ashwill.