With humble beginnings in one small location in Phoenix, Sunstate is one of the largest independent equipment rental companies in the United States, with 56 stores in nine southwestern states, employing more than 1,300 people. 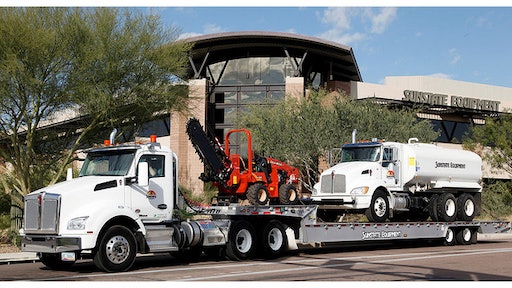 “There are other companies that rent the same equipment as we do, but service is what separates Sunstate Equipment from the rest.”

It’s a simple statement, shared by Patty Coleman, director of fleet for Sunstate, and one that has rung true since founder Mike Watts started Sunstate Equipment back in 1977.

With humble beginnings in one small location in Phoenix, Sunstate is one of the largest independent equipment rental companies in the United States, with 56 stores in nine southwestern states, employing more than 1,300 people. Double-digit sales growth has been the norm with no end in sight.

“The construction industry is revitalized and we’ve really tapped into that segment with the equipment we offer – from front loaders, skid steers, scissors, you name it,” said Coleman.  “We deliver the rental equipment with a fleet of 228 Kenworths – from 41 new Kenworth T880s to Kenworth T370s for tight in-city deliveries.  Plus, we’re even putting into service three Class 5 Kenworth T170s for use as tire trucks. The tire trucks support all of our rental equipment with any tire issues, plus we service other accounts. This division of our business is another example of how service separates us from other rental companies.”

According to Coleman, when Sunstate purchased Fuhr Rentals in 1981, it propelled the company into large equipment rentals, and with it, the need for big trucks. “Mike had long been a Kenworth fan. He perceived Kenworths to be the truck of choice for drivers; a truck the drivers would be proud to drive.  Mike also said that if you treated your employees with respect – like family – they would bend over backwards for customers – and that’s how we wanted to separate ourselves from other companies. It’s been a philosophy that’s worked at Sunstate and that’s why, in part, we’ve been buying Kenworths for so long.  Kenworths show our drivers we care about their work environment. And they show our customers that we’re serious about quality.”

That commitment to quality is demonstrated by Sunstate Equipment’s 41 new Kenworth T880 day cabs, which have been entering into service over the past few months. According to Coleman, the T880s are spread out among the company’s rental centers. Nearly all are equipped with the PACCAR MX-13 engine rated at 430 hp and driven through 10-speed transmissions. For T880s running in high-altitude, mountainous terrain, Sunstate spec’d 15-liter engines.

“With drivers, no news is good news. They’d be quick to let us know if something was wrong,” Coleman laughed. “But they are letting our regional managers know they like the T880s and they can’t wait to get more in the fleet. The T880s are a real step up with the wider cab and all the driver comforts. Kenworth made a good thing even better – we’ve been a long-time T800 customer. A high compliment to the Kenworth brand is how we recently had one driver who almost refused to leave his T800, which was a 2000 model with over 500,000 miles on the odometer. He just loved that truck. Our drivers really take pride in what they drive and become quite attached to their Kenworths.”

Reliability is also a key component for Sunstate. “Absolutely,” said Coleman. “Service to both Sunstate and our customers means that we get them their equipment when and where they want it.  We will often go as far as 100 miles out for equipment deliveries. That’s another reason we’ve gone with Kenworths. They’re extremely well built and keep us moving. They’re also easy to work on by our own maintenance staff. Plus we have the support of the Kenworth network of dealers in all of our locations. We work with Inland Kenworth here in Phoenix, but once trucks are delivered to our rental centers throughout different states, the trucks are supported by the Kenworth dealer in their location.”

A growing area of rentals for Sunstate is in water trucks. “We determined during 2014 that there was a group of water trucks in our fleet that should be replaced due to age and overall condition,” said Coleman. “We’re putting to work 21 Kenworth T370s with 4,000-gallon water tanks. The Southwest region has experienced growth and the expectations are that these units will be utilized long-term, including in new markets such as Odessa, Texas. Often you’ll see water trucks on old chassis, but when we penciled everything out, it made sense to build water trucks on new Kenworth T370s. They’ll hold up over time and provide uninterrupted service to our customers – and that’s what they expect from us when they rent.”

When it’s time for new equipment, Coleman said they use Ritchie Brothers to liquidate its inventory. “We have a lot of equipment to change out so we’ve been auctioning off our equipment with great success,” she said. “We’ve also been using Ritchie Brothers for selling our Kenworths as well – when mileage comes up on 450,000 miles – and we’re making out very well. Buyers at the auction know our trucks and how well maintained they are. Plus they know Kenworths and how reliable they are – they are sought-after trucks. We’ve never had a problem selling them and I can tell you we get a very good price.”

Kenworth Truck Company is the manufacturer of The World’s Best® heavy and medium duty trucks. Kenworth’s Internet home page is at www.kenworth.com. Kenworth is a PACCAR company.