Do your homework to select a saw that makes a productive, cost-effective cut. 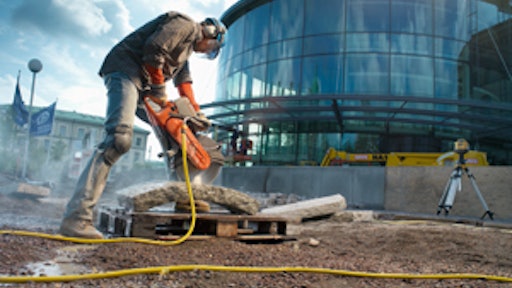 Hand-held, center-drive concrete cutoff saws are a common item in many contractors' toolboxes — and for good reason. They're a versatile, quick and relatively inexpensive way to cut through concrete.

Yet, they aren't the do-all, end-all concrete cutting tool. Concrete chainsaws and, to some extent, offset-drive cutoff saws (or ring saws) can complement and, in some applications, do more than a standard cutoff saw.

"In many cases, a concrete cutoff saw and a concrete chainsaw work together," says Rebekah Gallert, demolition product manager, Wacker. "There are places for both, and I don't really see one tool ever replacing the other."

Doing your homework to know which saw to select for a particular job can help you make the most productive and cost-effective cut.

Considerations about the type of saw to use on a particular job typically include the price of blades and initial cost of the tool. But they also include the time required for the cut, labor cost, maintenance cost and the ability to do different types of jobs. Remember, too, that for all saw types, the cost of consumables varies widely, depending on the application, saw model and other factors.

The initial cost of a center-drive cutoff saw is the lowest, and its circular diamond blades can be cheaper than diamond chains. That's in large part because, over the last 10 years, the manufacturing process has become more mechanized, a greater number of manufacturers have entered the market and there is a much wider variety of quality levels — all of which have driven down the cost of diamond blades in general.

Joe Baillargeon, technical services, Husqvarna, estimates on average the cost of cut per in./ft. starts at about $.20 for a standard cutoff saw vs. $.60 for an offset-drive cutoff saw.

And while diamond chain can be up to twice as much as the blade cost for a standard cutoff saw, technology has reduced chain cost, as well. "Cost is probably about 20% of what it was just 10 years ago," says Kent Johnston, education and market development coordinator, ICS, Blount, Inc.

By nature of their design, you will get more life with a center-drive circular blade than with a diamond chain. This is because the added utility of the chain/bar platform allows more movement of the diamond segments than with a more "fixed" platform, such as a circular blade.

Tips to extend blade and chain life include selecting the proper chain or blade for the conditions, as well as using the correct amount of water while making the cut. Also, don't cut too deep. "If you need to cut 4 in., don't do it all at once," advises Gallert. "Divide it into two cuts."

This concept of step cutting is reinforced by Johnston, who adds that it applies to almost all concrete cutting saws, including chainsaws.

There are clear-cut differences in operating costs for a cutoff saw vs. a chainsaw. However, Johnston encourages contractors to consider the use of chainsaws more closely.

"Contractors are most familiar with cutoff saws. They serve as a benchmark," says Johnston. "And, there's a built-in idea about how expensive chainsaws are to use. But cost of use has come down dramatically over the years, and the utility you get with the chainsaw often more than makes up for a little extra diamond cost. If you need the functions of a chainsaw, you should certainly consider it. And don't forget to think about the labor-saving aspects and additional applications that simply can't be done with any other tool."

Evaluating the cut will help identify which saw to use in a particular application. Chainsaws have the advantage when it comes to depth of cut and cutting square corners. A cutoff saw simply can't make a square corner without over-cutting it. If your job requires a clean, square corner, a chainsaw is your best choice.

Chainsaws also have the upper hand in smaller openings, decorative cutting or odd shapes. "You can basically carve your name into a solid wall," says Baillargeon.

Cutting small openings in thick concrete is possible with a chainsaw. "If you have an 8" x 10" vent opening, you realistically couldn't use a standard cutoff saw because you would have to over-cut so much you change the integrity of the wall," Baillargeon points out. "Chainsaws allow zero over-cut so you can make those small openings."

"Single-side access can be a huge benefit of using a chainsaw," adds Johnston. "If you want to be able to get through concrete more than about 4.5 in. thick, and you don't want to have to attempt to match up cuts from both sides, or if you simply can't get to the other side, then a chainsaw is going to allow you to do the job."

Cutoff saws have an advantage in situations where using water is not an option, although most manufacturers don't recommend dry cutting since water suppresses dust and increases blade life. "Water availability is something you will want to address," says Gallert. "You can cut dry with a cutoff saw if that's your only option on a jobsite, especially if you're just doing a quick cut. You have to evaluate whether or not your jobsite allows water and whether or not it's too cold outside to utilize water."

Depth of cut, size and shape of opening and access all play big roles in determining which saw is needed. The deepest center-drive cutoff saw cuts a little over 5.5 in., but the more common blade size (14 in.) will give you just over 4.5 in. of cutting depth. An offset-drive cutoff saw will cut to about 10 in., but must use the full 14-in. diameter of its blade to do so. While there are hydraulic-powered concrete chainsaws that will cut more than 24 in. deep, the most common gas-powered units will cut 12 to 16 in. deep, depending on the model and bar and chain used.

Considering these dimensions, long, shallow cuts can be effectively handled by a standard, center-drive cutoff saw. But as cuts get deeper, you need to weigh whether using a cutoff saw to cut from both sides, or cutting through the entire depth with a chainsaw is a better option. Some deep cuts — such as those with only single-side access or that are excessively deep — simply can't be made with a cutoff saw. Also, openings smaller than 14" x 14" in concrete that is 10 in. thick can only be made with a chainsaw.

In some situations, a combination of cutoff saws and chainsaws is the best option. A cutoff saw is oftentimes used as a prep tool for a chainsaw, says Baillargeon. In many applications where you would use a chainsaw, you would also use a cutoff saw. "One doesn't eliminate the other," he notes.

For example, Baillargeon suggests when cutting a 36-in.-wide by 8-ft.-tall by 8-in.-thick door opening, you could use a standard cutoff saw to precut the straight portions, then use an offset-drive cutoff saw or chainsaw to reach the final depth. For the square corner, use a chainsaw. Scoring the straight cuts first with a cutoff saw to a depth of about 2 to 3 in. is a cheaper and faster way to cut the opening. However, this entire opening could also be done with the chainsaw alone.

"Before making a decision about which saw to use for a particular jobsite, ask yourself how deep the cut needs to be," says Gallert. "Also consider the shape of cut and how clean it needs to be. Then evaluate how big the job is and if water is available.

"It's important to consider all the factors that affect the cut when making a determination about which concrete saw is the best fit," she adds. "Oftentimes, the most cost-effective method for deep cuts is a combination of both types of saws."

Understanding the capabilities and limitations of concrete cut-off machines and diamond chainsaws will help you determine which tool is right for your job.
Jenny Lescohier
October 16, 2019

Patented Tri-Vac technology pipes water to the blade guard and vacuums the slurry away for respirator-less cutting
Guarda Systems
January 23, 2019

The Outlaw is a worm drive-based, cold cut saw with an 8-in. blade that cuts all different types of metal. With its 2 ¼-in. depth of cut capacity, it has the ability to cut up to 2-in.-diameter pipe in a single pass.
February 7, 2017

The Medusaw can cut up to 2-in. depths and has a unique plunge lock system with a three-point alignment that facilitates accurate cuts and ensures clean entry and exit from the cut.
February 6, 2017

Integrated dust control allows the capture of up to 90% of the dust at the source
iQ Power Tools Inc.
January 9, 2017