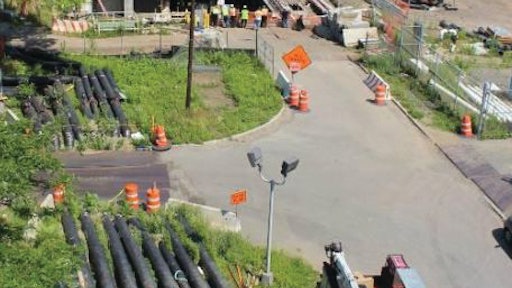 A few years ago the Combined Sewer Overflow Regulator at the 26th Ward wastewater treatment plant in Brooklyn, N.Y. collapsed. Replacement construction included conforming to local environmental regulations that restricted the use of diesel engines to 175 hp or less, and all engine driven equipment was required to be sound attenuated to 50 decibels at 30 feet.

The estimated flow through this regulator was 85 MGD, with a combined plant capacity of 170 MGD. The discharge point was the high-level man hole approximately 500 feet away.

Godwin, a Xylem brand, worked with the design engineer on the project prior to bid to help design a bypass solution for this sensitive and highly variable system. The New York City DEP had no means of measuring the influent flow through this half of the plant; therefore, the flows specified were merely estimates.

Once the project was awarded, Godwin began the engineering submittals and project planning with the general contractor. During the review and approval of submittals, approximately 25 percent of the working space for bypass pumping was lost for other adjacent projects.

Godwin mobilized the contract and two fusion technicians at the end of May 2011. Approximately four weeks later, during the bypass setup, the contractor encountered a wooden floor which had been  mummified by concrete since the early 1900s. This floor began to rot once it was exposed to air and subsequently undermined the remaining structure. The contractor was given a stop work order so the situation could be resolved and rectified.

In April 2012, the contractor was given notice to proceed and Godwin sent the fusion technicians back to the site for an additional three weeks of setup, installation and testing.

During the initial phase of mobilization and setup, Ryan Booth, lead sales representative, and Bob Spinner, Jr., lead fusion technician on the project, devised a plan for the installation of the equipment and piping. Due the significant loss of available real estate and tight working space, the installation could not be reset after its initial placement. The contractor had to bench down three of the primary pumps and stager the suction lines in order to fit the bypass system into the space.

The completed bypass system was started in June 2012. Within the first week, the city had a 10-year storm event, in which all 15 pumps were needed to keep up with the flow. Three of the DPC300s are currently running around the clock to handle the average daily flow of the plant.

The ValuPrime is a compact and powerful pump ideally suited for the dewatering needs of the construction, industrial, and agricultural markets and was based on the proven technology of the Prime Aire and Prime Aire Plus models.
The Gorman-Rupp Co.
January 12, 2018

New pumps are capable of accommodating flows of up to 6,164 gpm
Atlas Copco
September 12, 2017
Follow Us