A barge-mounted crane provides the lifting power to get Chicago's new harbor lock gates in place. 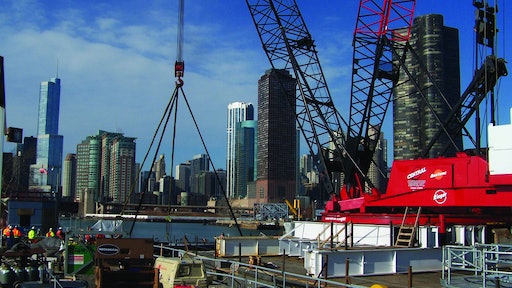 Because the harbor lock gate replacement called for mounting the crane on a barge, Central Contractor Service selected a 300-ton-capacity Manitowoc 4100W S-3 Ringer crane with a capacity-enhancing ringer attachment.

On average, more than 40,000 vessels, 900,000 passengers and 200,000 tons of cargo pass through the gates of Chicago's Harbor Lock each year, and the lock itself opens and closes 11,500 times annually. But the 72-year-old Harbor Lock on Lake Michigan at the mouth of the Chicago River, owned and operated by the U.S. Army Corps of Engineers (USACE), has been deteriorating for the last 15 years. The lock gates have been leaking, and 10 gate breakdowns have occurred since 1991.

According to a 2006 article at chicagobusiness.com, the deterioration of the lock had the city worried about the potential for disrupting recreational and commercial boating, reducing the region's water supply and threatening downtown Chicago with flooding. Finally, new lock gates are being installed as part of a major overhaul project.

Watery Platform Calls for a Ringer

The lock replacement project is being handled by general contactor James McHugh Construction. It hired Central Contractors Service of Chicago to provide the lifting power to get the new gates in place.

Central's decades of experience in lift planning made it easier to select the proper equipment. It recommended its 300-ton-capacity Manitowoc 4100W S-3 Ringer crane with a 140-foot boom, a total picking radius of approximately 72 feet and a capacity-enhancing ringer attachment. There were several larger Manitowoc cranes to choose from, but Central felt that the 4100W S-3 Ringer, mounted on a barge, would be the most economical and would allow for better distribution of the point loading.

"When a crane must be mounted on a barge, the crane's load charts are decreased because of the lack of a reverse force," John Martello, general manager, Central Contractors Service, explains. "The relative instability of a floating platform has negating effect on the load weight able to be picked.

"Adding a ringer and pedestals to a crane distributes loading over a larger area and can increase the lifting capacity dramatically," he continues. "The ringer attachment on the 4100W was utilized to better spread the weight of the crane on the surface of the barge. Instead of all the weight of the crane being carried on just two tracks, the weight is distributed to 11 points. This allows point loads to be reduced."

It's a Lock for Central

The crane was erected on the barge at the Iroquois Landing dockside facility in Chicago, IL. The new fabricated gates, with a total weight of 180,000 pounds, were loaded up and the barge was towed by tugboat to Navy Pier, a trip of three hours.

The lift and installation of the first gate took place on December 2, 2010, and the second gate was set a week later, on December 9. Both procedures went without a hitch.

According to Ken Derry, Central's crane operator, the USACE was impressed with the crane and the operation. "USACE required that the maximum list of the barge during the gate picks be no more than 2%. The actual list during the pick was 0.00%. This number is amazing, considering the weight of the pick and its location on the water almost 90 feet away from the crane."

The barge and crane were to be repositioned to set the final two gates in mid-January.

Central Contractors Service serves markets in greater Chicago, northern Indiana, southern Illinois, St. Louis, Missouri, and Iowa, and has been a member of the ALL Erection & Crane Rental Corp. Family of Companies since 1977. ALL, the largest privately owned crane sales and rental company in North America, offers its fleet of cranes, aerial work platforms, boom trucks, material handlers, and other lift equipment from strategic locations throughout the U.S. and Canada.

This is the official launch of IPAF's app, leading off in the UK and Ireland, with the next phase rolling out in other territories and languages in the coming months.
International Powered Access Federation (IPAF)
Jun 3rd, 2021

Together, PowerFleet and Logisnext have teamed-up to introduce the new PowerFleet Enterprise Telematic Solution to customers across North America.
Mitsubishi Logisnext Americas Inc.
May 27th, 2021

The new changes are a direct result of customer and operator feedback, and will be rolling into rental yards in Q3 2021.
Skyjack
May 25th, 2021

The MME Series offers two heights to chose from: the MME20 with a platform height of 20 feet and the MME25 with what the company says is an industry leading non-rotating vertical mast lift platform height of 25 feet.
MEC Aerial Work Platforms
May 24th, 2021

The low profile dome in the viewing area ensures the operator’s field of view stays clear no matter what environment they're operating in.
TVH Parts Americas
May 21st, 2021

Haulotte machines have been working at the Wenchang spacecraft launch site to help with the assembly and testing stage of the CSS (China Space Station).
Haulotte Group | BilJax
May 11th, 2021

Oshkosh Corporation was recognized for its ethical business practices, sustainability initiatives, and use of emerging and advancing digital technologies.
JLG Industries Inc.
May 11th, 2021

Workers may now complete the practical component of MEWP operator training in a VR environment through one of Energy Safety Canada’s ATPs.
Serious Labs
May 7th, 2021

To mark the arrival of Sinoboom AB14EJ and AB16EJ articulating boom lifts into the Schmetterling rental fleet, a product launch event was held to showcase the series of Sinoboom machines
Sinoboom
May 4th, 2021

The website is the first OEM online auction site of its kind and features Skyjack equipment alongside some of the industry’s other well-known brands at attractive rates.
Skyjack
Apr 30th, 2021

JLG will participate in OSHA’s 8th annual National Stand-Down to Prevent Falls in Construction, which takes place the week of May 3-7 and gives companies an opportunity to provide important safety training to help minimize the risks associated with falls.
JLG Industries Inc.
Apr 29th, 2021