The six-month project required 8,800 man hours, 3,500 bags of cement bag mix material and thousands of pounds of steel and lumber 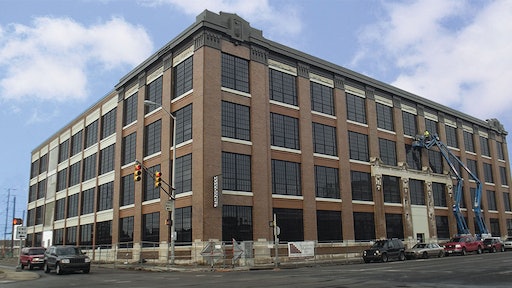 Western used a combination of scissor lifts and articulating booms to complete the exterior building repairs.

Restoring a deteriorated facade and exterior concrete of a historic building

Western Waterproofing, a member company of Western Construction Group, completed the monumental task of restoring the deteriorated facade and exterior concrete of the historic Litho Press building in Indianapolis, Ind. The project was originally projected to last just three to four months but turned into a six-month project requiring 8,800 man hours, 3,500 bags of cement bag mix material and thousands of pounds of steel and lumber when demolition uncovered more severe deterioration than originally anticipated.

The building, located at 800 North Capitol and owned by The Whitsett Group and Ambrose Property Group, had been abandoned until a redevelopment project allowed for its complete restoration to feature 111 apartment units.

"The engineer called out for approximately 1,500 LF of shallow depth concrete repairs not exceeding 4 inches in depth. Once demolition began, we discovered severed columns 20 inches in diameter and beam deterioration ranging from 6 to 24 inches in depth," said Western Waterproofing Project Manager Travis DeJohn. "We knew then that the number of hours and amount of materials needed to complete the job was going to escalate quickly."

Western used a combination of scissor lifts and articulating booms to complete the exterior building repairs. The JLG 50-ft. rough-terrain 4x4 scissor lifts with stabilizers allowed for multiple craftsmen to work on a single beam during demolition, forming and pouring, while also allowing for entire drops to be completed only moving up and down. JLG 660SJs 4x4 boom lifts (66-ft. platform height with 6-ft. jibs) allowed for greater mobility and the jib additions allowed for the basket to reach the beam deterioration on the building interior. The 66-ft. lift capability also enabled the lifts to reach multiple drops while staying parked in one position. Western also used JLG 860SJs 4x4 lifts (86-ft. platform height with 6-ft. jibs) to reach both the highest parts of the building and the hardest to access based on its ability to span over 80 ft.

The entire exterior was first sounded with claw hammers to determine the approximate size of concrete delamination and marked with construction paint to help budget the escalating quantities. After sounding, Western removed the delaminated concrete using 1” and 2” steel tempered bits on 15-lb. pneumatic chipping hammers. These hammers were being run by one of the two, 375-cfm air compressors onsite throughout the project. Once all deteriorated concrete was removed, the existing steel reinforcement was cleaned and coated with rust inhibitor or removed and replaced due to extensive corrosion. After the steel preparation, each beam was formed to size using plywood, 2X4s, 4X4s, nails and wood screws for the pre-ordered windows to fit below the beams. When forming the beams, openings were left open so the cementitious bag mix could be poured into the forms.

After replacing the steel reinforcements as needed, Western formed individual patches and poured back cementitious bag mix material using 5-gal. buckets. The buckets allowed for the mix to be transported easily and also poured easily into the awaiting form openings. Roof parapets were formed and poured using an engineer-designed concrete mix which the concrete truck emptied directly into the pump truck and transported the concrete mix through a hose system to the awaiting roof. The concrete truck and pump were utilized due to the volume of repair material needed for the parapet walls and the height of the roof. A Caterpillar TL1055 telehandler allowed Western craftsmen to move the concrete drum mixer to each elevation along with over 50 skids of cementitious material, lumber and steel.

During the pour, the forms were vibrated to fill any voids. After the bag mix set up, the forms were removed and any imperfections were cleaned up and finished by one of the Western craftsmen. Throughout the job pneumatic core drills were used to test concrete deterioration and rotary hammers to install steel reinforcement. Due to the structural deterioration, a shoring plan was created by a structural engineer for each elevation, which entailed over 100 post shores and structural scaffolding based on the locations and intensity of deterioration. When repairing the roof parapets, a concrete pump truck was used to pump concrete from the ground to the awaiting parapet forms on the roof. A hydromobile system was also used to lay brick masonry on the east elevation columns.

With the scope of work drastically increasing, Western had to work overtime to try to stay within the tight timeline and budget constraints, and every detail had to be meticulously coordinated to allow several trades to complete their work simultaneously alongside one another. Western worked closely with the general contractor on the project, Indianapolis-based TWG Construction, LLC, to coordinate the schedule and budget adjustments necessary to complete the project and maintain work quality.