The International Powered Access Federation (IPAF) issued a record 97,488 PAL Cards worldwide through its approved training centers in 2011, an increase of about 13.9% over the 85,605 PAL Cards issued in 2010. 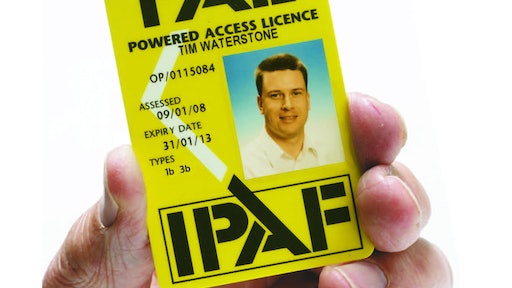 Upon completion of the IPAF eLearning module and hands-on training, trainees receive a PAL card, which serves as proof that the cardholder has been trained to operate powered access equipment safely and effectively.

The International Powered Access Federation (IPAF) issued a record 97,488 PAL Cards worldwide through its approved training centers in 2011, an increase of about 13.9% over the 85,605 PAL Cards issued in 2010.

A valid PAL Card is proof that the cardholder has been trained to operate powered access equipment safely and effectively. PAL Cards are valid for five years and can be verified online at www.ipaf.org. IPAF’s PAL Card operator training programme is certified by TÜV as conforming to ISO 18878.

Slightly more than half of all IPAF-approved training centres are now outside the UK and the Federation says that there are currently close to 400,000 valid PAL Cards in circulation.

At the end of 2011, IPAF had nearly 900 members worldwide. More than half the membership is now based outside the UK, and membership continues to grow in places such as the US, Brazil and South East Asia.

"The economic outlook is still signalling caution but I am delighted to report that IPAF members have set another record for safety," said IPAF CEO Tim Whiteman. "We congratulate all members, contractors and training centers for their support and recognize all who contribute to the success of this industry-led voluntary training programme."

IPAF: Recognition and Avoidance of Hazards