Valued at approximately $20.6 million, the vehicles will be delivered to U.S. Army facilities around the globe 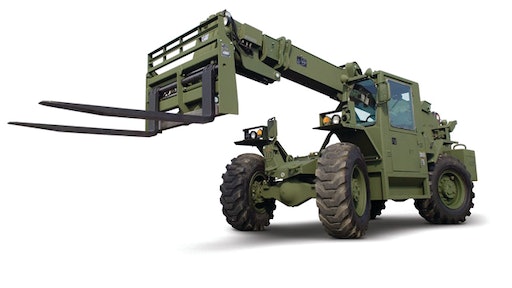 McConnellsburg, PA - JLG Industries, Inc., an Oshkosh Corporation company [NYSE:OSK], announced that it has received a delivery order from the U.S. Army to build a total of 116 All Terrain Lifter Army System (ATLAS II) telescopic forklifts. Valued at approximately $20.6 million, these vehicles will be delivered to U.S. Army facilities around the globe.

“We are very proud of JLG’s military telehandler programs and our continued commitment and ability to serve the U.S. Army,” said Denny Buterbaugh, JLG’s vice president – government products and programs. “The ATLAS II can reach over obstacles to place loads weighing up to 10,000 lbs (4,536 kg) into trucks or shipping containers. These vehicles, which provide exceptional rough terrain capability and versatility, will further improve the ability of our soldiers to quickly and reliably carry out their logistical missions.”

ATLAS II rough terrain forklifts deliver several performance enhancements over the original ATLAS design, including reduced emissions and the addition of several multifunctional attachments. Manufactured in McConnellsburg, PA, the ATLAS II machines will supplement the 2,500 original ATLAS units that are currently being utilized by the U.S. Army in operations around the globe.

Matching a renter’s specific task with the right tool can be challenging. Learn how by downloading this whitepaper, The Right Products for the Job.
September 23, 2020
Crane

With existing standards last changed in 2006, the ANSI/SAIA A92 suite of A92.20 design, A92.22 safe use, and A92.24 training standards are introducing the most significant changes since the standard were first published in the 1970s.
International Powered Access Federation (IPAF)
August 24, 2020

With social distancing and a new way of doing business now the reality for most of us, IPAF’s ongoing commitment to developing its training program into new online and remote learning applications has really risen to the forefront.
International Powered Access Federation (IPAF)
August 24, 2020