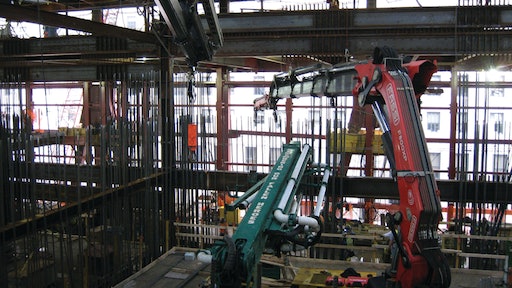 Once the steel rebar was distributed on each floor, the Fassi F800XP would hold the rebar in place for the concrete team.

Handle and move some of the 26,000 tons of reinforcing steel plus miscellaneous formworks that would have to be moved from floor to floor to help keep the tight floor per week pace on schedule at the World Trade Center construction site.

The World Trade Center team had to overcome ambitious deadlines, a rigorous work schedule and a materials handling challenge that threatened to hobble the process before it began. To help meet expectations and overcome the problem, the tower's construction team enlisted the FASSI articulated crane, from Fascan International.

Perhaps the highest profile piece of architecture in the country, perhaps the world, is Tower One of the new World Trade Center complex in lower Manhattan. Budgeted at $3.8 billion, the tower, also referred to as 1WTC, is designed to be 105 stories when completed in the Spring of 2012, will be topped by a mast that will bring the total height to a symbolic 1,776 feet, and will be the focal point of a 16-acre, multi-structure complex.

In 2007, when Renzo Collavino, President of Collavino Construction - the World Trade Center projects' main concrete supplier - approached Bernie Faloney of Fascan International and Giovanni Fassi of the Fassi Group, the tower had not progressed much beyond the foundation.

According to John Abbey, Collavino's equipment supervisor on the project, the schedule was set for the completion of one floor each week, at 40,000 square feet per floor, and the team was unsure of how to distribute the materials to the construction teams on each floor and still maintain its schedule.

Collavino asked the Fascan team to engineer a solution for handling some of the 26,000 tons of reinforcing steel plus miscellaneous formworks that would have to be moved from floor to floor in the soon-to-be-started tower. Thousands of pounds of concrete and rebar were needed for each floor, but the giant tower cranes were limited in when and where they could deposit materials - especially the bundles of reinforcing steel rebar, which could weigh between 25,000 and 30,000 pounds each.

As the plan stood, the tower cranes would have to hoist the rebar and deposit it where there was available space, forcing the workmen on each floor to walk to the pieces of steel, haul them to their specific location on the floor and position the rebar in advance of the concrete team. In addition, the method of conveying and positioning the rebar placed major limitations on the size of rebar pieces that could be used and placed the workers at a higher risk of injury.

The tower cranes also had to balance their efforts between the concrete and steel installation teams working around two construction shafts at the center of the structure. The concrete teams had to keep pace with the steelwork teams, and Collavino knew that between the lifting and distribution of the rebar and concrete there would be deadline-killing lulls in the production as the concrete teams waited for the steel to be positioned.

Collavino decided to present the problem to Fascan and Fassi.

Fascan technicians, along with concrete specialists from EFCO and SCHWING America, came up with a drop-on, plug-and-play solution: Fascan customized two F800BXP.28L214 articulating cranes to assist in the handling and positioning of the massive amount of rebar.

Fascan engineered a customized base that connected easily to Collavino's traveling pedestals, which held the concrete pumps and rose through the core of the structure on a hydraulic-supported, floating form. Each crane was capable of rotating 360 degrees and lifting approximately 70 tons, and each crane could be operated via radio remote control.

Implemented in the fall of 2009, the idea not only eased pressure on the process of distribution but allowed Collavino to keep his concrete and steel crews on pace with the grueling construction schedule set by the New York Port Authority.

"The Fassi equipment has been fantastic. I have had minimal need for any maintenance on these cranes," says Abbey. "When I have needed a repair or replacement part, Fascan is right on top of it. Their response has been immediate."

One WTC has been able to keep or exceed its expected pace because of the versatility and reliability of the floating Fassi equipment, according to Abbey. "I've never seen Fassi Cranes put to use in the core of a building like this," he says. "But judging from this performance, I'm sure I'll be seeing them more often."

"It isn't just that our expertise fits well with the problem the Collavinos asked us to solve," Faloney says. "This is the kind of project we're proud to be involved with. It's historic."