The GTH-636 looks like the GTH-844 with the side engine mount, high pivot boom, and high-visibility cab, but there are several differences. The GTH-636 is powered by a 74-horsepower, 2.9-liter Tier 4 Final compliant Deutz turbo-charged diesel engine. 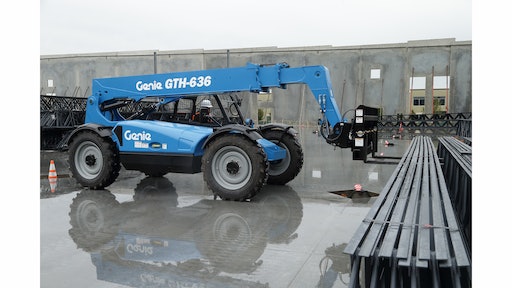 Genie unveiled its all-new 6,000-lb. capacity GTH-636 telehandler to the press at an event held in Snoqualmie Falls, WA earlier this month, showcasing a machine that's designed with visibility and serviceability in mind.

Delivering all of the performance of a full-sized machine in a compact size, Genie's GTH-636 is a result of more than a detuning of the company's 8,000-lb. GTH-844 telehandler by downsizing the cylinders. Instead, Genie optimized the structure in the boom and the chassis, dropping the weight of the machine to under 20,000 lbs. By staying under 20,000 lbs., the new telehandler built from the ground up delivers full-sized performance, full-sized tires and full-sized capacity while delivering the right-sized price.

The Genie GTH-636 is also the right size for the jobsite. With a maximum lifting height of 36 ft. and a forward reach of 21 ft. 11 in., the telehandler offers a maximum lifting capacity of 6,000 lbs. Its operating weight is 17,600 lbs. and the telehandler provides an outside turning radius of 13 ft. 4 in. The telehandler is very versatile with a rugged chassis and boom, standard QA and auxiliary hydraulics, a right-side mount engine and a new boom support for enhanced visibility.

"The GTH-636 looks like the GTH-844, but we refined everything," says Chad Hislop, director of product development, Terex Aerial Work Platforms. "The only thing that's the same as the 844 is the cab. It operates exactly the same way, but everything else is different."

He adds, “With the GTH-636 we took the best features of our 8,000-lb. telehandler and then created a whole new equation. We focused on maximizing customer ROIC."

Like the GTH-844, the GTH-636 has a side engine mount, high pivot boom, and high-visibility cab, but it's powered by a 74-horsepower, 2.9-liter Tier 4 Final compliant Deutz turbo-charged diesel engine. By keeping the horsepower under 75, the engine is Tier 4 final compliant, only using a diesel oxidation catalyst. This catalytic converter requires no scheduled servicing, meaning no Regen and no Diesel Particulate Filter (DPF).

The Genie GTH-636 has features with all of the same benefits included in the new Genie telehandler cab launched in 2013. Cab options include fully enclosed, and fully enclosed with air conditioning. The highly adjustable suspension seat and adjustable tilt steering wheel are standard. These ergonomic adjustments allow a wide range of operator sizes so the user is comfortable throughout their day.

The GTH- 636 provides excellent visibility. Operators have a clear view to all four tires as well as great visibility to the rear of the machine. This visibility provides the operator with a great tool for congested jobsites.

All Genie telehandlers come standard with the Quick-Attach system. This gives the operator the flexibility to use the forks and carriage that come with the machine, or quickly attach to a new carriage. A new feature on our Quick-Attach system is our new lifting shackle. This new lifting point can support a full-rated suspended load of 6,000 lbs. without the need of an additional attachment.

The telehandler’s boom can be serviced by removing one cover, a common feature with all Genie telehandlers. This lets the service technician remove all the boom cylinders and chains without having to take the boom apart, saving time and money over the life of the telehandler.

“Genie has built its reputation on products that are easy to maintain and service,” said Hislop. “Regular maintenance is easier, and that keeps the equipment working.”

The Genie GTH-636 is now in production and available in North and South America.