Report shows 2018 was another stronger-than-expected, double-digit growth year in the US, with MEWP total rental revenue value exceeding $10 billion 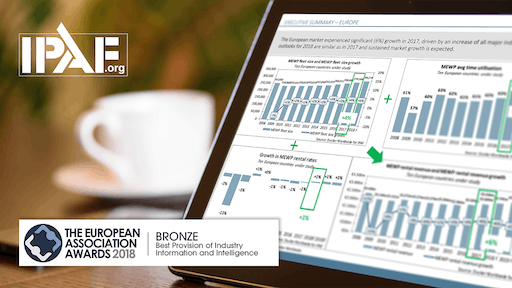 The mobile elevating work platform (MEWP) rental market is still booming, with the worldwide fleet nearing 1.5 million units, but uncertainty clouds longer-term outlooks, according to the latest market analysis from the International Powered Access Federation (IPAF). In the UK, revenue per unit fell by 3% across 2018 and was overtaken by France for the first time, after French revenue per unit rose 5% in 2017.

While persisting Brexit uncertainty in the UK, the US-China trade war and presidential elections set for 2020 muddy the waters, markets are booming in Spain, Germany and the Netherlands, where MEWP rental grew very strongly in the past year, by 8-10%.

For the past two years, IPAF’s Powered Access Rental Market Report was positive across the board, with the US in particular exceeding expectations and experiencing steady growth. And the European MEWP rental market also sustained impressive growth across most key indicators in all ten countries under study. In the UK and some Nordic countries, however, growth plateaued and outlooks were more pessimistic.

The European MEWP rental market as a whole began to show growth in 2015, this was sustained in 2016 and 2017, with France seeing double-digit growth in 2017. This trend continued in continental Europe through 2018, with France and Italy experiencing 7% annual market growth, the Netherlands seeing an 8% increase and Germany and Spain growing by 9 and 10% respectively.

In 2018, the European MEWP rental market revenue was worth an estimated €2.75 billion ($3.3bn), the market having grown significantly in 2018 (6%). The overall economic situation is good and both construction and non-construction sectors generated increased demand.

The level of investment remains significant, as rental companies focused on both expanding and renewing their MEWP fleets with more specialist, sophisticated and generally greener equipment. It seems 2018 may be a turning point and investment is expected to stabilize from 2019 onward. The European MEWP rental market in particular continues a shift towards greener machines.

The market outlook in 2019 and beyond shows that uncertainty prevails, however, particularly in the UK, where Brexit is far from resolved, and the ongoing trade war between China and the US is starting to impact the exports of some European manufacturers, particularly in Germany. Also in the US, the 2020 presidential election is also an unknown beyond which few are confidently projecting favorable outlooks.

Nonetheless, the report shows that 2018 was another great year for the US market, with stronger-than-expected growth. Double-digit growth in MEWP rental revenue was recorded and total value exceeded $10 billion. The level of cross-hire increased in 2018, caused by strong ongoing market demand.

Sustained fleet expansion continued in 2018 and total MEWP fleet size now exceeds 600,000 units in the US, however in light of the longer-term uncertainty, most US MEWP rental companies expect to scale back fleet expansion in the next few years.

Across 2018, the worldwide rental MEWP fleet size reached 1.47 million units, up from 1.35m at the end of 2017. Strong growth in Asia is being driven mainly by China. Growth was reported in all countries and regions. The 2018 report also contains a special China market focus, which indicates almost exponential growth.

In 2018, the Chinese MEWP rental market value was $495m, or €583m. By all measures, it was a good year: Several major projects started during the second half of 2017 and positively impacted market growth in 2018. Outlooks remain positive for the next few years, despite challenges linked to increased competition and the fact that downward pressure on the economy may be reflected in the MEWP rental market.

The Powered Access Global Rental Market Report is compiled each year by Ducker Frontier exclusively for IPAF. The report is compiled based on interviews with rental companies and other industry experts globally. The report is available to purchase in full via www.ipaf.org/reports, while last year’s version can now be purchased at a discount and older versions downloaded free from www.ipaf.org/reports

Around the world, organizations and individuals have been able to utilize the eLearning version safely from their homes and the use of eLearning has grown more than eight-fold since the start of the pandemic.
International Powered Access Federation (IPAF)
August 24, 2020
Follow Us