Push-around lifts continue gaining traction as contractors do their part to reduce accidents by limiting the use of ladders on jobsites. 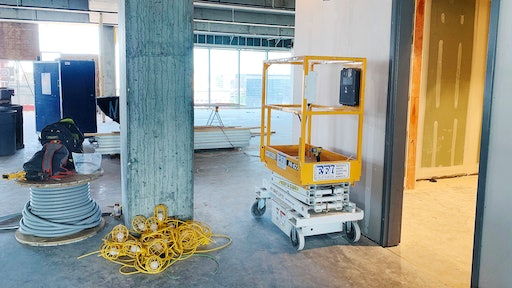 Many rental centers around the U.S., including EFI, are finding that customers are getting on board with the “ladders last” mentality. Replacing ladders and scaffolding on jobsites with push-around lifts can result in fewer accidents, additional productivity, and reduced fatigue.
EFI

Push-around lifts continue gaining traction as contractors do their part to reduce accidents by limiting the use of ladders on jobsites. EFI’s introduction of these lifts, which included the new PA-1030, was initially based on a request from one of their largest customers. Now through continuing to educate safety directors and local contractors, they have seen a greater adoption of the product. The PA-1030 is part of Hy-Brid Lifts’ Push-Around Series of lifts that was recently introduced to the market.

“The demand for these machines was originally fueled from general contractors’ efforts to create a safer work zone on jobsites,” said Scott Hatcher, president of Equipment Finders. “We have been renting Hy-Brid Lift units for many years, and when they introduced the new PA-1030, we felt it was a natural progression to add these machines to our fleet given those current safety trends.”

Many rental centers around the U.S., including EFI, are finding that customers are getting on board with the “ladders last” mentality. Replacing ladders and scaffolding on jobsites with push-around lifts can result in fewer accidents, additional productivity, and reduced fatigue.

Hy-Brid Lifts push-around lifts have a smaller footprint and numerous features that make them a smart addition for rental centers. The PA-1030 enables users to manually maneuver the unit into place, and hydraulically raise and lower to the desired work height. The equipment features a 10-ft. platform height and a 16-ft. working height. The platform is 41 in. long by 20.5 in. wide, and the total stowed height is 69 in.

“Electricians, mechanical contractors, and security system contractors are just the beginning of the type of customers who experience the benefits of our push-around lifts,” said Terry Dolan, president and CEO of Hy-Brid Lifts. “Users can quickly push and relocate the lift without the hassle of maneuvering a ladder or disassembling and assembling scaffolding. The units increase safety on jobsites, and we are dedicated to developing the safest options for operators. It is great to see that EFI’s customers are realizing the benefits of low-level access.”