Quality of eight characteristics of some elements of US infrastructure improved, but others declined. Sector and local grades measure how conditions impinge on economic activity 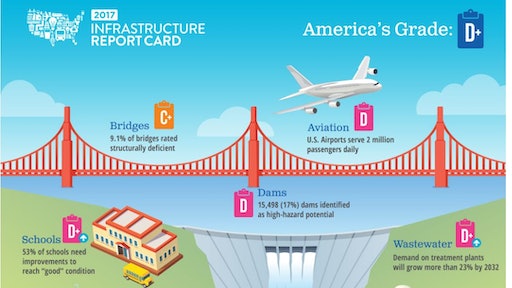 The 2017 Infrastructure Report Card from the American Society of Civil Engineers reveals that the U.S. has made some incremental progress toward restoring the nation’s infrastructure. But it has not been enough. As in 2013, America’s cumulative GPA is once again a D+.

The 2017 grades range from a B for Rail to a D- for Transit, illustrating the clear impact of investment – or lack thereof – on the grades. Grades for three categories – Parks, Solid Waste, and Transit – declined this year, while seven – Hazardous Waste, Inland Waterways, Levees, Ports, Rail, Schools, and Wastewater – saw slight improvements. Six categories’ grades remain unchanged from 2013 – Aviation, Bridges, Dams, Drinking Water, Energy, and Roads.

The areas of infrastructure that improved benefited from vocal leadership, thoughtful policymaking, and investments that garnered results. These improvements demonstrate what can be accomplished when solutions that move projects forward are approved and implemented.

The ASCE Committee on America’s Infrastructure, made up of 28 dedicated civil engineers from across the country with decades of expertise in all categories, volunteers their time to work with ASCE Infrastructure Initiatives staff to prepare the Infrastructure Report Card every four years. The committee assesses all relevant data and reports, consults with technical and industry experts, and assigns grades using the following key criteria: