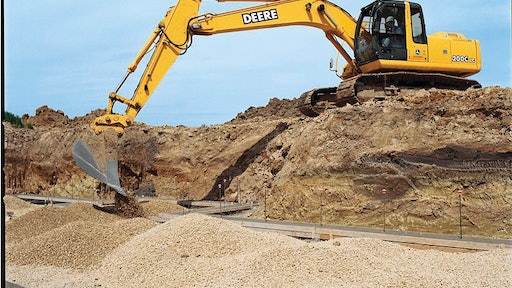 "John Deere has completed another year of exceptional achievement," said Samuel R. Allen, chairman and chief executive officer. "Our success reflects a continued pattern of strong customer response to our innovative lines of equipment coupled with the skillful execution of business plans aimed at expanding our global competitive position."

During the year, Deere introduced a record number of products and announced plans for six new factories, in China, Brazil and India. "John Deere's record performance is a further tribute to our operating model, which stresses rigorous cost management and asset efficiency," Allen stated. "As a result, we are achieving unprecedented financial results and generating healthy levels of cash flow. These dollars are funding growth throughout the world and also are being shared directly with investors in the form of dividends and share repurchases."

Deere's equipment operations reported operating profit of $955 million for the quarter and $3.839 billion for the year, compared with $716 million and $2.909 billion last year. Results were better for both periods largely due to higher shipment volumes and improved price realization. These factors were partially offset by increased raw-material costs, higher manufacturing-overhead costs related to new products, and higher research and development expenses. In addition, full-year results were impacted by higher selling, administrative and general expenses.

Net income of the company's equipment operations was $552 million for the quarter and $2.329 billion for the year, compared with $357 million and $1.492 billion last year. The same operating factors mentioned above, along with a lower effective tax rate, affected both the quarterly and annual results.

Financial services reported net income attributable to Deere & Company of $122.1 million for the quarter and $471.0 million for the year compared with $98.4 million and $372.5 million, respectively, last year. Results for both periods benefited from growth in the credit portfolio and a lower provision for credit losses, partially offset by narrower financing spreads and a higher effective tax rate. Included in 2010 fourth-quarter results was a write-down of wind-energy assets held for sale to fair value.

Company Outlook & Summary
In spite of an unsettled global economy, demand for John Deere products is expected to experience substantial growth in fiscal year 2012 and the company is forecasting further increases in sales and earnings as a result. Company equipment sales are projected to increase about 15 percent for the year and to be up 16 to 18 percent for the first quarter compared with the same periods of 2011. Included is a favorable currency-translation impact of about 3 percent for the quarter and about 1 percent for the year. For the full year, net income attributable to Deere & Company is anticipated to be approximately $3.2 billion.

Supported by record 2011 performance, John Deere remains well-positioned to carry out its extensive growth plans and capitalize on positive long-term economic trends, according to Allen. "Thanks in large part to the dedication and hard work of our employees, dealers and suppliers worldwide, John Deere's plans for helping meet growing global needs for food and infrastructure are moving ahead at an accelerated rate," he said. "We are proud of the company's performance in 2011 and look forward to building on these gains in 2012 and beyond. We have great confidence in the company's future and our role in helping feed, clothe and shelter the world's growing population. These developments in our view hold great promise, which should prove rewarding to our investors and other stakeholders in the future."


Companies in this article