United to Buy RSC in a $4.2-Billion Transaction 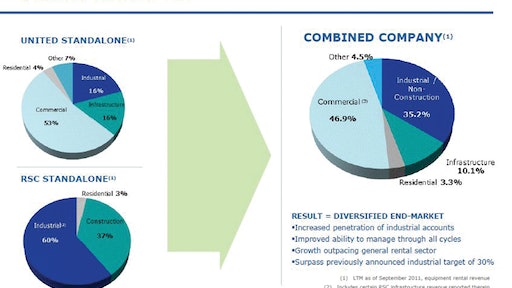 Combining United Rentals and RSC's accounts results in a more attractive balance of construction and industrial customers than either company enjoyed individually, with 47% in commercial construction, 35% industrial (non-construction) customers, 10% infrastructure contractors and the remaining 8% split between residential and other customers.

United Rentals, Inc. (NYSE: URI) and RSC Holdings, Inc. (NYSE: RRR) entered into a definitive merger agreement under which United Rentals will acquire RSC in a cash-and-stock transaction valued at $4.2 billion, including $2.3 billion of net debt. Both boards of directors unanimously approved the proposed transaction and recommended that their respective stockholders also approve it.

The transaction will be financed with 60% cash and 40% stock. Each outstanding share of RSC common stock will be converted into the right to receive $10.80 in cash and 0.2783 of United Rentals share. United will issue new debt and draw on current loan facilities to finance the cash portion. Once completed, the company will be 70% owned by United Rentals shareholders.

United estimates synergies from combining the companies of over $200 million annually, which they expect to realize within the first two years.

Combining the companies will create a leading North American equipment rental company with a more attractive business mix, greater scale and enhanced growth prospects. The combination is also expected to accelerate United Rentals’ growth with industrial customers as well as provide a lower cost base and a less volatile revenue profile to better position the company through all phases of the business cycle. The new United Rentals is well-positioned to benefit from increased rental penetration, the continued strength of the industrial sector, serving customers across a variety of industries and a recovery in construction activity.

Michael Kneeland, President and Chief Executive Officer of United Rentals said, “This transaction marks a transformative moment in our company’s history. Combining the experience and resources of two top performing equipment rental companies creates an exceptional company. The new United Rentals will build upon the best practices and management teams from both companies to deliver superior customer benefits and enhanced value for our stockholders. With the best talent in the industry, we have a tremendous opportunity to become the supplier of choice for customers throughout North America.”

Erik Olsson, RSC’s Chief Executive Officer and President, said, “RSC has a strong track record of profitable growth and we are proud of what we have built. At the same time, I am confident that by partnering with United Rentals we can accomplish far more than either company could have achieved on its own, including significant synergies. As a result, the transaction delivers significant value to our shareholders. Our similar customer-centric cultures and commitment to operational excellence will provide even greater value to our customers and facilitate a smooth integration. I look forward to helping to lead the integration process during a transition period.”

Upon the close of the transaction, three of RSC’s independent directors will receive seats on United Rentals’ existing Board of Directors.

Michael Kneeland, President and Chief Executive Officer of United Rentals, and Jenne Britell, United Rentals’ Chairman, will remain in their positions at the combined company.

Upon the closing of the transaction, each outstanding share of RSC common stock will be converted into the right to receive $10.80 in cash and 0.2783 of a share of United Rentals common stock, subject to the terms and conditions of the merger agreement.

The transaction provides immediate value to RSC stockholders through the cash component, as well as continued participation in future value creation of United Rentals through their ownership of approximately 30% percent of United Rentals on a fully diluted basis. The price of $18.00 per share represents a 58% premium over RSC’s closing price as of December 15, 2011.

The cash portion of the transaction will be financed through new debt issuance and drawing on current loan facilities. United Rentals has obtained financing commitments from Morgan Stanley Senior Funding Inc., Bank of America Merrill Lynch and Wells Fargo in support of this transaction. By the end of 2012, the combined company’s leverage ratio is expected to be in line with United Rentals’ previously stated target range of 3.5x – 4.5x. As a result, United Rentals expects to retain its current corporate credit ratings. United Rentals intends to re-pay the outstanding amounts on RSC’s existing Senior Secured Credit Facilities and Senior Secured Notes due 2017, and assume all of RSC’s existing unsecured debt.

The deal is expected to be accretive to United Rentals’ cash earnings per share in the first full year after closing. The transaction is anticipated to provide over $200 million of annual cost savings through the elimination of redundant infrastructure, branches and overhead, two thirds of which are expected to be achievable within the first twelve months following the closing of the transaction. The combination is also expected to provide meaningful revenue synergies from the expanded footprint, in particular with national and industrial account relationships and provide additional cash flow upside through optimization of the combined fleet and capital expenditures.

Oak Hill Capital Partners has agreed to vote its 33.5% shareholding in RSC in favor of the transaction.

Special meetings of the United Rentals’ and RSC’s respective stockholders will be held as soon as practicable after the preparation and mailing of the joint proxy statement/prospectus to be included in the registration statement on Form S-4 to be filed by United Rentals to register the shares of United Rentals common stock issuable in connection with the proposed transaction with the Securities and Exchange Commission and the subsequent mailing to United Rentals’ and RSC’s respective stockholders. The joint proxy statement/prospectus is expected to be mailed as promptly as practicable after the effectiveness of this registration statement.

United Rentals and RSC will held an analyst and investor conference call/webcast today, Friday, December 16, at 8:00 a.m. ET to discuss the proposed acquisition. The webcast can be accessed on the investor relations sections on the two companies’ websites http://www.ur.com/investor and http://investor.rscrental.com.