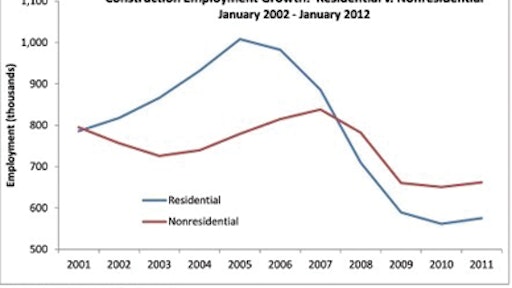 Despite the addition of 21,000 jobs in January, the nation's construction industry unemployment rate jumped to 17.7 percent, up from 16 percent the previous month, according to the February 3, 2012, jobs report by the U.S. Labor Department. However, construction employment is up by 116,000 jobs, or 2.1 percent, compared to January 2011, and is down from the 22.5 percent rate posted the same time last year.

"Clearly, the recovery in private construction has been accelerating," said Basu. "Job growth was particularly rapid in the manufacturing, commercial and power categories, a reflection of rising private momentum.

"However, the impact of strained public finances also continues to be apparent, including the trend of diminished employment in the heavy and civil engineering categories, which declined 1.4 percent for the month," Basu said.

"The U.S. economic momentum appears to have returned to a level sustained before the soft patch of economic activity emerged early last year," said Basu. "January represented the fastest pace of job growth since April 2011."