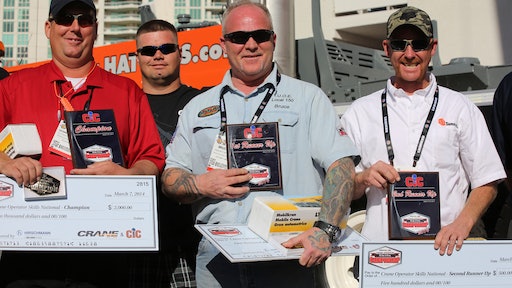 Orlando and Chicago area crane operators took the top spots at the MCM & CIC Crane Operator Skills Championship, held March 6-7, 2014 in Las Vegas. Featured during ConExpo-Con/Agg, the competition drew crowds of onlookers and more than 40 operators who vied for the title in the Championship competition.

“While the event itself is a lot of fun, CIC acknowledges that this is serious business and crane operators are professionals. Safety and productivity are top of mind for these men, who boast years of experience and qualification via various certification or licensing programs,” said Debbie Dickinson, Executive Director of Crane Institute Certification (CIC).

CIC congratulates Champion Kenneth Bowyer of All Crane Rental of Florida for his exceptional load control and ability to smoothly and efficiently complete the load handling tasks while under pressure. His score of 545.45 is a composite of his crane operation performance, successful completion of a crane simulator task, and demonstration of basic rigging knowledge. Bowyer received $2000, a custom belt buckle and leather jacket.

Kenneth Bowyer at the controls.

Bruce Gay, a member of IUOE Local 150 and an operator for Imperial Crane Service, Bridgeview, Ill., was named First Runner Up. Gay held onto the top spot for most of the competition, until Bowyer competed late in the morning of the second day. At the conclusion of the competition, Gay was presented with $1000, a custom belt buckle and leather jacket.

The title of Second Runner Up and $500 went to another crane operator who qualified at the Sanford, Fla., regional competition in 2013 hosted by the Florida Crane Owners Council, Crane Institute of America, and M&P Specialty Insurance. Thomas Cunningham is an operator for Sims Crane & Equipment, Orlando. Both Gay and Cunningham specialize in taxi crane rental, operating different types of cranes on a daily basis. Bowyer primarily operates a Liebherr 1250-6.1 300 ton AT, but he is a go-to operator for his company, with experience on RTs, Crawlers, and Truck Cranes of various makes. Bowyer also has experience on RT, Crawler, and Truck Mounted cranes of various makes and assists with training less-experienced operators.

In addition, Jesse Pettit, the 2012 Champion, and Gregg Eldridge, who made it to fourth place in 2012, both made respectable finishes at the 2014 Championship, coming in fifth and sixth, respectively. Chris Marlow, another crane operator for Imperial Crane Service, took the fourth position in this year’s event.

Four of the 19 finalists are Canadians. Cory Babwick and Peter Delmonte earned spots during the 2013 regional qualifier in Lindale, Alberta. Babwick is employed by Alberta-based Canada Crane/Sarens Canada. Delmonte represented Kerr Crane of Ontario. Two additional Canadians qualified during the Las Vegas regional held March 4-5. They are David Goodhill of Mammoet Cranes in Ontario, and Julien Bilodeau of Quebec.

“Certified crane operators play an important role in achieving safety and productivity on the job site. Employers can rely on an operator’s certification as the foundation for his or her qualifications. CIC will continue to share this message with operators and their employers at future crane operator skills competitions,” said Dickinson.

With CIC one Practical Exam can earn up to five certifications. Among the certification programs that CIC has recently released are for operators of Multi-Purpose Equipment, including Digger Derricks, Articulating Boom Cranes, and Service/Mechanics Trucks. Exam questions and tasks are relevant to real-world work sites. Exams are available in English and Spanish. At CONEXPO, CIC also announced the launch of its Lift Director program, Chaired by Mike Parnell, President of ITI.

Learn about benefits Barton Malow has gained by implementing tool tracking technology to not only manage hand tool inventory and logistics on projects, but also capture data on tool performance and use.
Becky Schultz
May 10, 2021
Latest