After three consecutive months of two-year high levels, the Monthly Confidence Index, which topped at 65.4, is down to 61.4 in June 2014 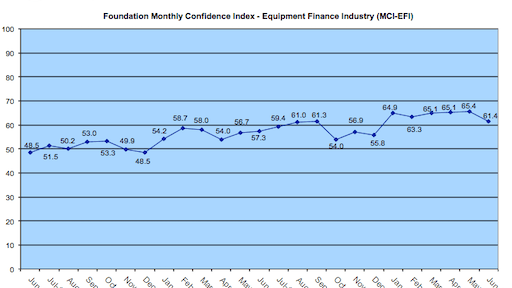 The Equipment Leasing & Finance Foundation (the Foundation) releases the June 2014 Monthly Confidence Index for the Equipment Finance Industry (MCI-EFI) today. Designed to collect leadership data, the index reports a qualitative assessment of both the prevailing business conditions and expectations for the future as reported by key executives from the $827 billion equipment finance sector. Overall, confidence in the equipment finance market is 61.4, an easing from three consecutive months of two-year high levels, which topped at 65.4.

When asked about the outlook for the future, MCI survey respondent David Schaefer, Chief Executive Officer, Mintaka Financial, LLC, said, “Application volume, approvals and funding are all up and are at record post-recession levels.  Portfolio performance in terms of delinquency is still extraordinarily low.  We are optimistic about 2014 and expect to exceed our yearly origination goals.”