The exhibition had 1,035 attendees in total, a figure that does not include the 4,400 attendees at the adjoining APEX aerial platform exhibition. All APEX visitors had free access to IRE. 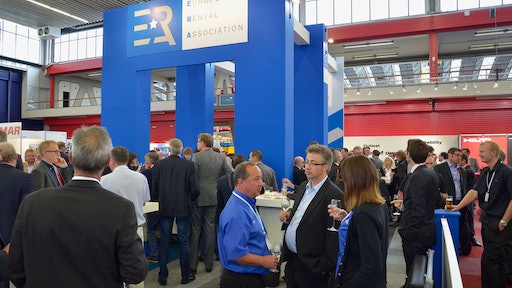 The exhibition had 1,035 attendees in total, a figure that does not include the 4,400 attendees at the adjoining APEX aerial platform exhibition. All APEX visitors had free access to IRE.

Senior figures from the European and worldwide rental sector were at the show, including representatives from Loxam, Kiloutou, Zeppelin, Workx, Energyst, Boels Rental, Cramo, Ramirent, United Rentals, Hewden, HSS and many more.

Mauro Tonon, marketing and South American sales manager at Jekko, the mini crane specialist, said the exhibition had been a ‘great success’ for the company. “The exhibition was very nice… our stand was always full of people: the first day we signed an agreement with a company in South Africa, they will be our new Jekko dealer. The second and third day we received some orders from our dealers."

Stuart Archer, managing director at Postpullers (UK) Ltd, said, “We had a really fantastic show, meeting influential clients from across Europe and Worldwide, making some very useful contacts, and returning with some valuable orders. We would definitely attend this show again.”

Also happy was Paul Hay, managing director of TowerLight UK. “The organizers should be congratulated for securing most of the top organizations from European rental markets who were each represented at the very highest level. We took the opportunity to demonstrate the sustainable qualities of our lighting tower range to some of top decision makers within the industry."

Ground-Guards CEO Craig Michel said, “We are using IRE to launch into the international market, after an exceptional year so far we are looking forward to branching out beyond the UK.”

The show is scheduled to return to Amsterdam in 2017, with dates still to be confirmed.