The Toro Company celebrated its 100th anniversary on July 10, 2014, as more than 2,000 employees, retirees, channel and business partners, and other valued guests gathered at the company’s headquarters in Bloomington, MN. 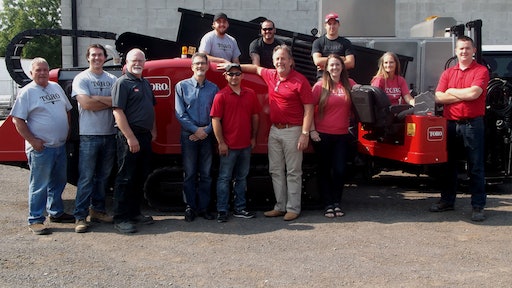 The Toro Company celebrated its 100th anniversary on July 10, 2014, as more than 2,000 employees, retirees, channel and business partners, and other valued guests gathered at the company’s headquarters in Bloomington, MN. Joining Michael J. Hoffman, Toro’s chairman and chief executive officer, as he remarked on the company’s rich history and the individuals and innovations that helped shape the company’s success was Minnesota Governor Mark Dayton, who presented the official proclamation declaring “Toro Day” in the State of Minnesota, and Bloomington Mayor Gene Winstead.

“As we celebrate our first 100 years, it was truly gratifying to be surrounded by many of those who played such a significant role in the company’s success,” said Hoffman.  “We are honored to have such talented employees around the world and individuals who have served the company throughout our history, along with great channel and business partners, who work every day to serve our customers and help advance our efforts in the industry. And, I especially want to thank Minnesota Governor Mark Dayton and Bloomington Mayor Gene Winstead for joining our centennial celebration and honoring the people of Toro.”

“Part of the mentality of Toro is reaching out to its customers and to the communities, and developing high-quality products while strengthening your market through innovation,” said Governor Dayton. “I don’t think that the founder could have imagined 100 years ago that Toro would grow to be a Fortune 1000 company, or that more importantly, you’d be a leading corporate citizen in Minnesota. Your contributions to this state have been enormous.”

Mayor Winstead added, “Toro is an important partner in the Bloomington community, and is a company that has endured because of its commitment to customer service and innovation. I urge all citizens to recognize and celebrate the 100th anniversary of this valued business and community partner within the City of Bloomington.”

Among the many events taking place, invited guests were able to see the unveiling of a new history display featuring an extensive collection of vintage products from throughout company’s first 100 years – including the first Toro-branded piece of equipment, the legendary To-Ro power cultivator introduced in 1919.  Also on display were many of the company’s current products for golf courses, sports fields, parks and municipalities, construction, professional contractors, homeowners and agricultural growers.

During its centennial year, the company’s many locations around the world have focused on giving back in communities where employees live and work.  This has included Toro’s ‘100 Acts of Caring’ initiative, planting 100 trees in each Toro community worldwide, and a Centennial Legacy Grant Program supporting nonprofits in their efforts to beautify and preserve outdoor environments, and enhance green spaces.

Complete details of Toro’s 100-year history can be found at www.toro.com/100, where viewers will find a centennial timeline and have the opportunity to share their Toro story from throughout the years.

Rental company owners are transforming their business with inspection management software and these three tips for a winning strategy.
Record360
November 18, 2020
Follow Us