Kubota Manufacturing of America Celebrates its One Millionth Unit Produced in the U.S.

In a special ceremony on Oct. 12, 2015, Kubota Manufacturing of America Corporation (KMA) commemorated its one millionth unit produced at its facility in Gainesville, GA since the company began production of wheeled products in 1994. 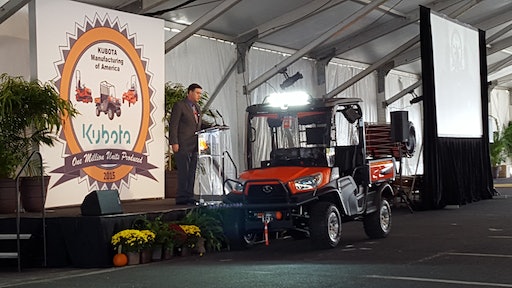 In a special ceremony on Oct. 12, 2015, Kubota Manufacturing of America Corporation (KMA) commemorated its one millionth unit produced at its facility in Gainesville, GA since the company began production of wheeled products in 1994. This milestone event comes on the heels of the company’s recent groundbreaking of a new RTV manufacturing facility in Gainesville at Gateway Industrial Centre.

“This historic milestone is further proof that Kubota’s presence in Georgia is one of our state’s greatest business success stories,” said Deal. “Kubota’s continued investment in Georgia is a vote of confidence for our pro-business climate and skilled workforce, and I look forward to their continued impact on our state and U.S. manufacturing.”

In 2012, KMA celebrated its 25th anniversary and in the following year opened a new L-Series manufacturing facility at Kubota Industrial Equipment in Jefferson, GA. In 2014, KMA exceeded the production of 100,000 units annually for the first time in the company’s history, nearly double the units produced in 2009.

“For more than a quarter century, Kubota has been experiencing tremendous growth in the U.S., creating many new jobs as we expand our product offerings,” said Hironobu Kubota, president of KMA. “When we first began production here, we had less than 100 employees and today we’ve grown to more than 2,200 manufacturing-related jobs in the state. We are very proud of this growth because it demonstrates our commitment to be more responsive to our U.S. customers’ needs.”

Kubota has been doing business in the state of Georgia for more than 40 years, with its first operations located in Norcross. In the mid-1980s, Kubota purchased its first office building in the state at the current Kubota Tractor Corporation Southeast Division headquarters in Suwanee. Since that time, Kubota has further expanded its operations in Georgia to include KMA in Gainesville; its National Distribution Center (NDC) in Jefferson; and Kubota Industrial Equipment (KIE), also in Jefferson, which produces Kubota’s L-Series tractors and implements, including loaders and backhoes. Kubota Tractor Corporation, Kubota Manufacturing of America and Kubota Industrial Equipment are all U.S. subsidiaries of Kubota Corporation, based in Osaka, Japan.

KMA’s one millionth commemorative unit, an RTV-X1120D, will be auctioned off at Kubota’s National Dealer Meeting taking place in Atlanta, with proceeds benefitting the Farmer Veteran Coalition. Kubota and FVC partnered earlier this year to launch the “Geared to Give” program to help veterans establish or continue careers in farming. For more information on this program, visit www.KubotaCares.com.