Skyjack and Volunteers Give Endangered Trees at Guelph Arboretum a Lift

More than 75 volunteers and students from the University of Guelph joined arboretum staff to collect seeds from trees such as the Blue Ash, Tulip, Cucumber, Magnolia, Dogwood and Cherry Birch. 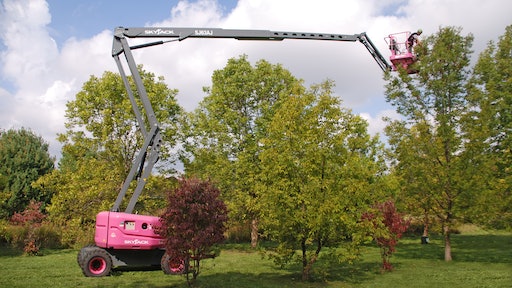 Skyjack returned to the University of Guelph’s Arboretum in early October to help protect rare and endangered trees. This time University of Guelph hosted a special event and invited students and volunteers to help collect seeds alongside a special pink Skyjack SJ63 AJ articulating boom lift for the “living gene bank”, part of the Rare Woody Plants of Ontario Program, saving rare and endangered tree species.

“Skyjack has a wonderful partnership with the Arboretum and their continued support is vital to the efforts of the living gene bank,” said Mary Lou Cairney, senior development manager at the University of Guelph’s College of Social and Applied Human Sciences. “The Arboretum is a beautiful place, but many people are not aware of the scientific events taking place here. Having Skyjack and their pink boom on site helps raise awareness for events like the seed collection with volunteers and promote the work of the arboretum.”

More than 75 volunteers and students from the University of Guelph joined arboretum staff to collect seeds from trees such as the Blue Ash, Tulip, Cucumber, Magnolia, Dogwood and Cherry Birch. Dispersed throughout the orchard, students and volunteers collected seeds from lower branches and bagged them to be dried and processed for the living gene bank.

The goal of the gene bank program is to archive the genetic diversity of the trees and help propagate the endangered species throughout Ontario. Some of the seeds collected by volunteers will also be sent to the National Tree Seed Centre for preservation and replanting.

“The success of the event wouldn’t have been possible without the Skyjack lift. The seeds needed for our living gene bank are on the tops of the trees, many of which are too tall for ladders to reach,” Cairney said. “The pink boom lift was also a big attraction for the volunteers who joined us.”

The SJ63 AJ, donated through Skyjack’s 30 FOR 30 PARTNERS anniversary program, helped Head Horticulturist Sean Fox reach the tops of the trees, which can be up to six stories high, enabling him to collect the best possible seeds for the gene bank.

The Skyjack was especially useful in reaching seeds from the Blue Ash, one of the tallest trees volunteers were collecting from. The Blue Ash is an important tree because even though it is at risk of extinction in Ontario, it is resistant to the emerald ash borer, an invasive species that has killed tens of thousands of trees, and it makes an excellent urban tree.

Though many students tried to climb trees within the orchards, the Skyjack boom lift was the only safe way to reach the best and most seeds. The highest quality seeds are often located on smaller branches near the tree top, making the Skyjack lift a safe and effective choice.

“The Skyjack was really indispensable to the event, it allowed us to safely collect a great deal more seeds,” Cairney said.

The Skyjack articulating boom was donated to the University of Guelph’s Arboretum event through Skyjack’s 30 FOR 30 PARTNERS campaign. This anniversary campaign is an effort to give back to communities as a thank you for Skyjack’s 30 successful years in business. So far, Skyjack has donated lifts to assist a food bank in the United States, fix up an orphanage in Singapore, restore lifeboats for the United Kingdom’s Royal National Lifeboat Institution and help mount a Beluga whale fossil at a aquarium in Canada.

“Skyjack has a strong partnership with the University of Guelph’s Arboretum, and we are excited to continue that partnership through the 30 FOR 30 PARTNERS program,” said Malcolm Early, vice president of market-ing at Skyjack. “The work they do to protect endangered tree species is vital not only to our hometown of Guelph, but also nationally and globally.”