Following the launch of a brand new electric slab scissor lift family at The Rental Show in February 2015, Snorkel is pleased to announce that they will expand the series with the addition of two new models. 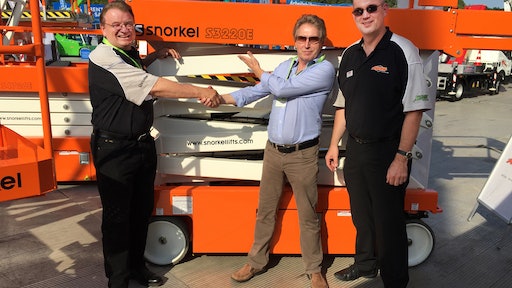 Following the launch of a brand new electric slab scissor lift family at The Rental Show in February 2015, Snorkel is pleased to announce that they will expand the series with the addition of two new models.

Both the S3215E and the S3220E share a 32 in. (0.81m) wide chassis, that are common with the S3219E and S3226E respectively. The lifts feature Snorkel’s innovative twin-door service trays, providing ‘inside-out’ access to all of the key machine components, even when working in confined spaces.  The new lifts also share the attributes of the rest of the family, including the fixed upper control box, saloon-style entry gates as standard, dual-shear scissor stack design with upsized pins, telescopic extension deck, upsized kingpins, and gravity-actuated pothole protection system.

The new models are currently in production at Snorkel’s US manufacturing facility in Elwood, KS. They will be officially launched at Bauma in April 2016.

The first order for the new lifts was received at Platformers’ Days 2015, by Buchtmann Arbeitsbühnen GmbH. Company owner, Willi Buchtmann placed the order with Bernhard Kahn of Ahern Deutschland, for 10 of the new S3220E electric slab scissor lifts, along with 5 of the S3219E models.