Michigan City High School held a ribbon cutting ceremony and open house for its Compressed Air Academy. The academy is the first of its kind in the nation. 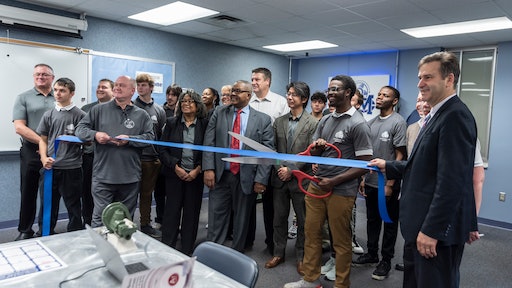 Michigan City High School (MCHS) recently held a ribbon cutting ceremony and open house for its Compressed Air Academy. The academy is the first of its kind in the nation. It was developed in 2018 to address regional workforce needs through a partnership involving the high school, the Economic Development Corporation of Michigan City (EDCMC) and Sullair, along with other compressor and vacuum manufacturers.

The 2019-2020 school year is the first full year of the Compressed Air Academy, where 45 students are enrolled. The Academy recently relocated to a renovated classroom featuring an advanced manufacturing flex lab and two air compressors – one of them being a Sullair ShopTek rotary screw compressor.

Charlie Takeuchi, Sullair COO and Executive Vice President, spoke at the event. He remarked, “Like other leaders of Michigan City-based companies can attest to, we are tasked with envisioning not only what tomorrow or the next year will hold for our companies – but we are entrusted with directing the future of our companies for 5, 10 or even 15 years from now. The future is rooted firmly in today.” He added the partnership with Michigan City Area Schools was a win-win situation to help ensure the area remains a national leader in the compressed air industry.

“This partnership is more than just a donation of equipment— it’s a deeper relationship that involves companies engaging with and mentoring our students,” Eason-Watkins said. “While we are celebrating the formal opening of the Compressed Air Academy program, it’s important to note this is a roadmap showing us all what is possible through the power of collaboration.”