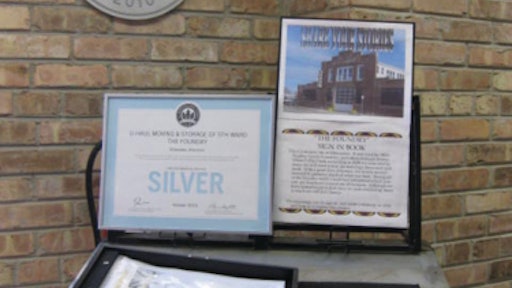 U-Haul Moving and Storage of Fifth Ward earned the prestigious LEED-CI Certification Silver for commercial interiors from the U.S. Green Building Council (USGBC). U-Haul is one of only two businesses awarded a Silver Certification for LEED-CI in the city of Milwaukee.

The U-Haul Moving and Storage of Fifth Ward project utilized an existing industrial warehouse built in the early 1930s that was located in Milwaukee's Fifth Ward. The district has been getting attention recently with the city's plans to stimulate growth in the area. U-Haul worked hard to retrofit this industrial building to be used as a do-it-yourself moving and self-storage facility, with sustainability in mind.

The project included restructuring a 3,371 sq. ft. to be used as a retail showroom. The space was located within an existing heavy-steel-frame structure enclosed by brick walls and a wood roof.  The brick walls were repurposed into double-wythe walls by similar bricks acquired from another building in Milwaukee built in the same time frame.

"The primary goal for the U-Haul Team was to reuse and recycle as much material as feasible, while installing as many new sustainable design features as possible," stated Mike Schneider, president, U-Haul Company of Eastern Wisconsin.

New elements of the facility include: efficient lighting with day-lighting controls and occupancy sensors, a high-efficiency HVAC system used in conjunction with a newly constructed thermal envelope to help reduce energy consumption and low-flow water fixtures to reduce consumption.

"The LEED certification of the U-Haul Moving and Storage of the 5th Ward shows the U-Haul commitment to common-sense sustainability. Using the Triple Bottom line as a guide, U-Haul created a sustainable showroom that highlights sustainable features that benefit both the client and the business as a whole," Phil Vetterkind, director, Sustainable Building Solutions.

The industrial warehouse was purchased for use by U-Haul on October 9, 2008. The building was most commonly known as the old Grede Foundry building.

Today, U-Haul Moving and Storage of Fifth Ward is a state-of-the-art facility that boasts 923 storage units with more than 60,046 sq. ft. of storage to go along with renting trucks, trailers and towing devices, as well as selling self-moving and towing products and supplies.

U-Haul was founded by a Navy veteran who grew up during the Great Depression. Tires and gas were still rationed or in short supply during the late 1940s when U-Haul began serving U.S. customers. Today, that background is central to the U-Haul Sustainability Program: "Serving the needs of the present without compromising the ability of future generations to meet their own needs." Our commitment to reduce, reuse and recycle includes fuel-efficient moving vans, neighborhood proximity, moving box reuse, moving pads made from discarded material and packing peanuts that are 100% biodegradable. Learn more about these facts and others at uhaul.com/sustainability.

Taking a 'LEED' in Wisconsin

Creative signs in interesting shapes, and with interesting designs, will catch people’s eyes and help you build brand awareness that will lead to increased job opportunities.
StickerYou
Jul 26th, 2021

The new line of JLG Rough Terrain Scissors has an answer for every task. When we say upgrade, we mean business – yours.
Jul 13th, 2021

Early indicators suggest that these two topics will be at the forefront of the Department of Transportation under President Biden, but they could also be key to making companies more profitable.
Dormie Roberts
Apr 21st, 2021

Along with the extended development of the Giatec SmartMix AI program, the company also plans to planting one tree for every product order shipped worldwide to offset the impact of GHG emissions.
Apr 20th, 2021

As climate change becomes a broader conversation, there will likely be changes across many industries in the coming decades. Companies in the construction industry can do their part now to help make their operations more sustainable
Bob Lester
Apr 19th, 2021

IDTechEx has released a new report which examines the benefits e-fuels can provide over other alternative fuel options.
Sara Jensen
Mar 6th, 2021

A new research center which will develop products for the growing area of powderon wood has been opened by AkzoNobel at its site in Como, Italy.
AkzoNobel
Feb 17th, 2021

Lehigh Hanson has launched EcoCem PLUS at its Edmonton plant in Canada.
Lehigh Hanson
Feb 4th, 2021

HeidelbergCement is starting the further development and scaling-up of the LEILAC technology (Low Emissions Intensity Lime And Cement) together with the Australian technology company Calix and a European consortium.
HeidelbergCement AG
Feb 2nd, 2021

Two examples that illustrate how admixtures can be used to reduce the CO2 footprint of concrete.
GCP Applied Technologies Inc.
Jan 25th, 2021

The new line of JLG Rough Terrain Scissors has an answer for every task. When we say upgrade, we mean business – yours.
Jul 13th, 2021
Follow Us