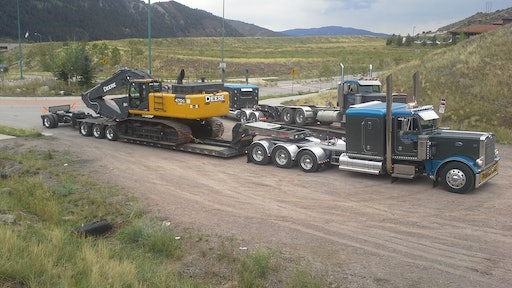 Bill Ewing started Ewing Trucking & Construction LLC in 1981 with just a single truck and help from his two sons. The company began working on projects throughout Colorado, specializing in private residential excavation, municipal projects and mobilization for companies such as LaFarge and Martin Marietta.

Transporting bulky mining equipment, excavators, large loaders and heavy dozers for its own operation and others is a daily routine for Ewing Trucking & Construction and a part of the business that is booming. It’s not uncommon for it to be hauling large CAT 988G loaders or 470 excavators from town to town in the area surrounding its home base in Edwards, CO.

Equipped with a 55-ton lowboy and a 51-ton Talbert trailer, a number of trucks, expertise in hauling and more than 20 employees, the Mobilization Division seemed unstoppable, except for one thing – the Eisenhower Tunnel. Located on I-70 just 60 miles from the city of Edwards, the tunnel’s 13-ft. 11-in. passageway was far too restrictive to pass through with a trailer loaded with large equipment.

Unfortunately, the route around the tunnel was a tedious one. The old U.S. Highway 6 over Loveland Pass was curvier, longer and steeper compared to I-70, plus took an extra 30 minutes and required pilot cars for oversized loads.

After escalating frustrations, Bart Ewing, who owns Ewing Trucking & Construction, decided a third heavy-haul trailer was needed that could provide enough clearance to get the largest equipment through the Eisenhower Tunnel. It also required sufficient capacity to handle the weight of customers’ heaviest equipment, and the length and width to accommodate these big machines.

A Trailer Made to Order

After years of using other heavy-haul trailer brands, Bart had become partial to Talbert because of advantages such as greater durability and lifting capacities. The trailers incorporate four hydraulic cylinders rather than two, providing greater capacities and minimizing the need for frequent load adjustments.

Ewing turned to Brian Conley, sales manager at Jim Hawk Truck Trailers in Denver, who sold Ewing Trucking & Construction a 51-ton Talbert lowboy several years earlier. Conley quickly recognized that a custom configuration was needed. Ewing and Conley spec’d a 55-ton drop-sided trailer with a ratchet-style gooseneck and a nitrogen-assisted dampening system (Nitro) 4th axle booster. The setup would allow the company to run a 3+1 configuration and fully optimize the trailer’s capacity. The trailer would also measure 9 ft. wide, 54 ft. long with a 27-ft. working deck length and a 15-in. loaded deck height.

Ewing has been hauling with the drop-side trailer, paired with a specialized 1986 Peterbilt truck, since May 2013. The trailer’s Nitro stinger ensures a proportionate weight distribution to the rear axle group.

The Nitro provides a 14-ft. 1-in. spacing behind axle three for the rear flip-up and removable axle. By hydraulically dampening axle movement and controlling load transfer, the Nitro absorbs hauling and loading shocks to reduce stress and provide a smoother ride. The suspension system oscillates around a central self-tracking pivot point grouping and hydraulically transfers loads in all terrains.

“The Nitro has really prevented several headaches when it comes to meeting axle/weight ratios and area bridge law specifications,” Ewing says. “All in all, the trailer has made a lot of things easier for us. We’re… relieved that we can now pass a 470 excavator through the tunnel with no hang-ups. That simply wasn’t possible before.”

Bravo Trailers has added the Brute Trailer, an extra-heavy-duty built trailer for hauling light equipment — ideal for transporting up to 7,500 pounds of equipment and safely storing equipment on location.
Bravo Trailers, LLC
December 8, 2020

CornPro's 10-in. I-beam flatbed can be hooked up with a heavy-duty 4-in.-square jack and 2 5/16-in. coupler to keep everything in place.
CornPro Trailers
April 2, 2020
Follow Us