The demonstrator Cummins electric truck uses a 140 KWh battery pack instead of a 12-liter engine. 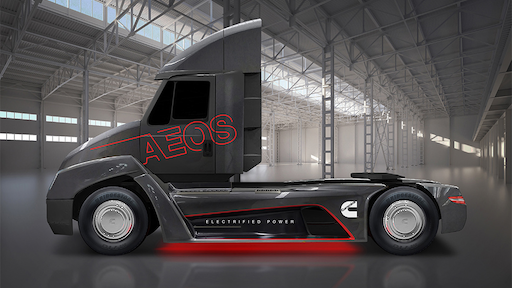 The demonstrator truck uses a 140 KWh battery pack instead of a 12-liter engine. The weight of the electric powertrain is roughly equal to that of the removed engine, aftertreatment, transmission and fuel tank. The tractor day cab when paired with a trailer has a gross vehicle weight rating limit of 75,000 lbs. The concept truck has a range of about 100 miles on a single charge for city driving that’s extendable to 300 miles with additional battery packs. The powertrain and truck will enable Cummins to learn more about the potential electrification holds for larger vehicles.

A regenerative braking system and the potential for solar panels on the trailer roof can send energy to the battery pack. Air drag is reduced by replacing side mirrors with an in-dash camera system. The truck achieves a significant air drag reduction via its highly streamlined design as well as a better sealed truck body and underbody – with no front radiator intrusion.

Even with the announcement, Cummins adds that diesel engines aren’t going away. The company expects diesel to be a popular option with customers for years to come. Cummins has and will continue to produce the cleanest diesel engines in the world, reaching near zero emissions levels.

The the truck will be unveiled in summer 2020.
Western Star - Daimler Trucks North America
March 16, 2020

The standard M2 chassis carries a Gradall, and Freightliner works with Gradall to mount air tanks and other accessories for easy upfit of the excavator upper.
Freightliner Trucks - Daimler Trucks North America
March 6, 2020

Navistar had settled 2016 charges of misleading investors about the company's development of an advanced technology truck engine that could satisfy U.S. pollution standards; half of Ustian's penalty was to return gains made during the period
Navistar International Corporation
March 2, 2020

Papé Kenworth Honored with 2019 Kenworth Dealer of the Year Award

The Dealer of the Year Award is given to the dealer group that best represents Peterbilt’s commitment to excellence and the pursuit of driving uptime for its customers.
Peterbilt Motors Co. - Paccar
February 18, 2020