Sort through onboard air compressor options to pick the right solution for your operations. 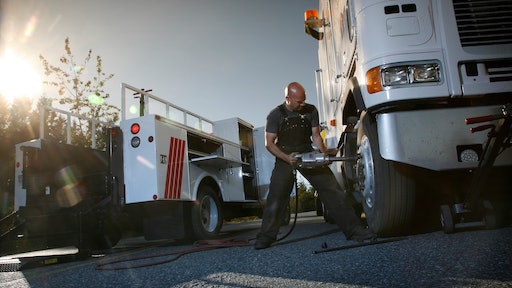 Onboard air compressors come in several types, each with its own benefits and potential drawbacks, depending on your situation. Selection starts with determining your air needs, including the requirements of the tools the compressor will run.

“When considering what the air compressor will be used for, contractors need to know their volume and pressure requirements,” says Adam Oppermann, assistant product manager, Stellar Industries. “Whether filling up tires or running pneumatic tools, knowing your cubic feet per minute (cfm) and pounds per square inch (psi) requirements is key.”

Jim Raymond, VMAC sales manager, agrees, noting, “Contractors and operators should find out the air demand of the tools they’re using (cfm, psi), and how they are running the tools (duty cycle). Whether you need continuous air flow or just air in short bursts is an important consideration. If you need air continuously, an air compressor that operates at 100% duty cycle is required to avoid having to stop work and wait for air to build.” 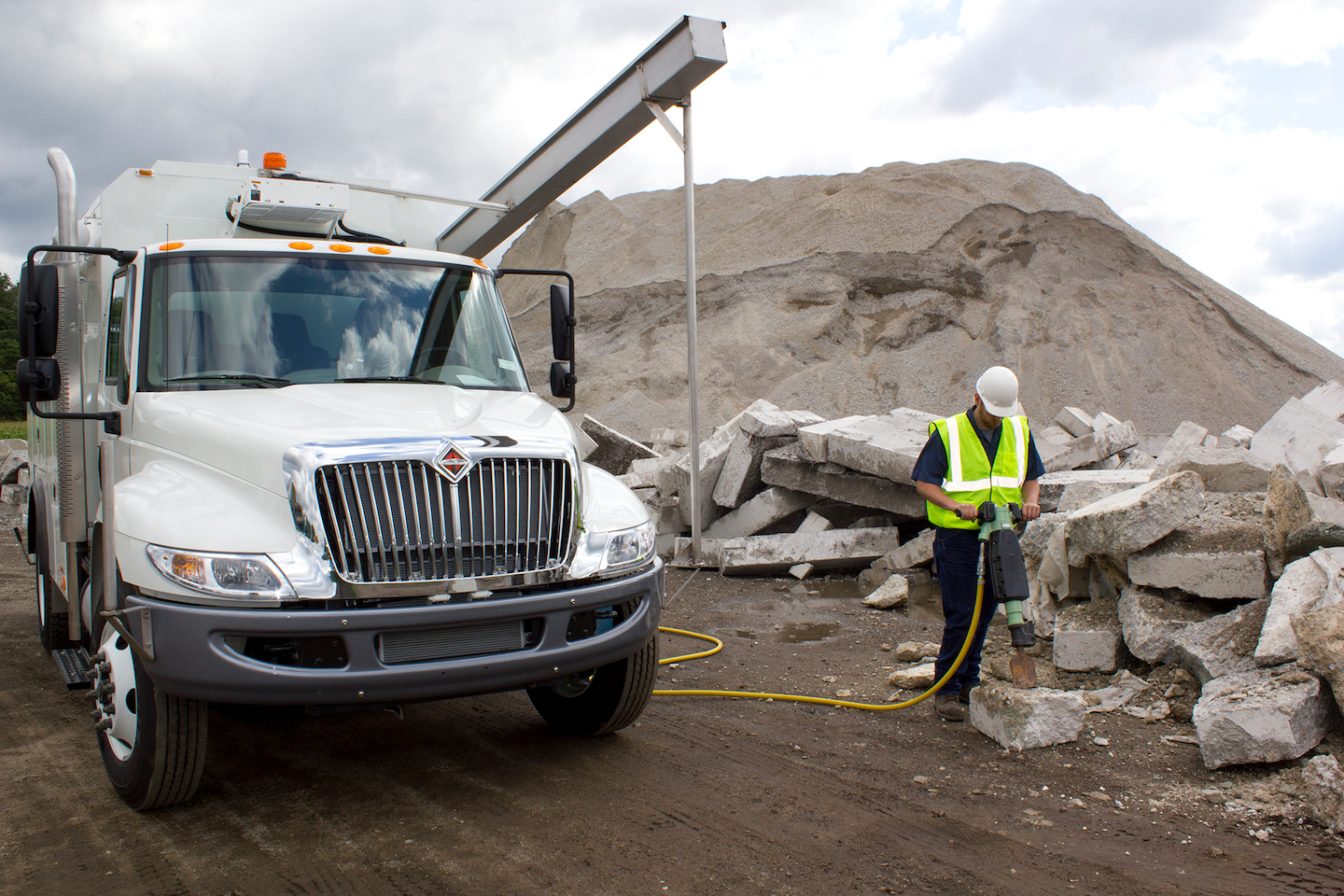 When selecting an air compressor, determine the volume and pressure requirements of the tools you need to run, as well as the duty cycle required. Image source: VanairIt’s important to understand what you need to accomplish with the air compressor throughout a typical work day. “Do you want to run a set of pneumatic tools to pull lug nuts off equipment... or hydraulic breakers or jackhammers?” asks Jeremy Bailey, Doosan Portable Power air products manager. “Those tools will be pretty specific on what pressures they need to run best.”

Determine how many tools you typically need to run at one time to calculate the total output required. “Each tool will have a cfm required to run,” Bailey notes. “So it turns into a math equation.”

There are two common types of air compressors for service and other work truck applications: reciprocating (piston) and rotary screw.

“Piston compressors compress the air with piston pumps and can have one or multiple stages,” Oppermann explains. “These take time to build up air in an air tank, and have shorter duty cycles, but can hold up and work with most applications.

“A typical oil-injected rotary screw compressor works by pulling air between two rotating screws, which compresses the air,” he continues. “These compressors remove the oil from the air and provide a near instant steady stream of air once turned on.”

Each offers pros and cons depending on how you plan to use them.

“Reciprocating air compressors that utilize an appropriately sized air tank, such as our RC40 hydraulic-driven system, are ideal for service and mechanic trucks that don't require continuous, on-demand air,” says Dean Strathman, vice president of sales, Vanair. “They are typically cost effective and have low maintenance.”

These units are especially suited to frequent on/off use. “If you are going to be turning your compressor on and off throughout the day, a piston compressor is a good option,” says Oppermann. “Piston compressors also require less maintenance than rotary screw compressors, but take a while to build up air in the air tank and tend to weigh more.”

While they are typically low maintenance, the up and down motion of the piston can cause components to wear relatively quickly, says Bailey. Rotary screw compressors are subject to less wear, meaning they tend to last much longer.

“[With a rotary screw], you have longevity,” Bailey states. “The truck will probably wear out faster than the compressor that’s on it.”

Rotary screw systems supply air on demand, and thrive in heavy-duty use cycles. “They provide increased air output compared to reciprocating units that are typically around 40 cfm,” says Strathman. “Vanair’s rotary screw units can produce up to 1,000 cfm, have been designed to run continually and have a long life cycle if maintained correctly.” He adds that he has seen 25+-year-old systems still at work in the field.

“If you are good at keeping up with maintenance and need an air compressor to turn on, run longer periods and have quick access to air, then a rotary screw could be a good fit,” says Oppermann. 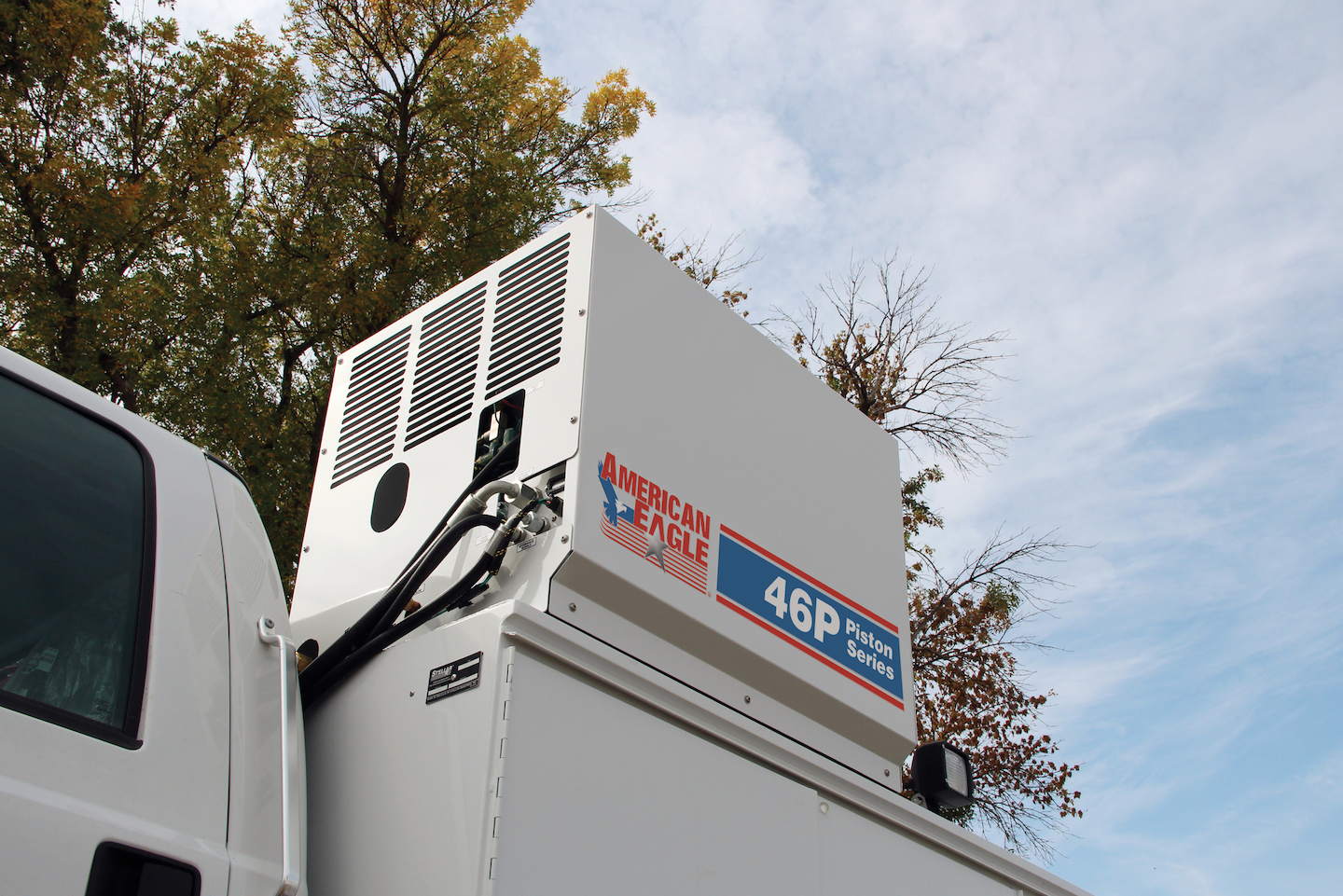 “If the user already has a need for hydraulics on the truck... an above-deck hydraulic-driven air compressor is a cost-effective machine,” Strathman concurs. “[It] doesn’t have the engine to maintain, as well as eliminates the weight associated with an engine-driven system.”

However, there is the potential for hydraulic leaks, and the hydraulic reservoir tanks take up space and add weight on the vehicle. “The truck has to run to power the hydraulic-driven air compressor, which increases fuel consumption and idling hours,” Strathman adds.

Gasoline-driven air compressors tend to be the least expensive configuration. They are easily transferrable between trucks and operate independently of the vehicle. Due to their popularity, they also offer ready parts and service availability.

However, these models may require a separate fuel source if the truck is diesel powered. They can also vary in both weight and footprint depending on the compressor type.

The lower cost of gas-powered models can be tempting, but you tend to get what you pay for. “You see a lot of people take a small off-the-shelf gasoline-powered air compressor and just bolt it to the deck of a service truck,” says Bailey. “Those aren’t necessarily made to [handle] the stresses of riding up and down the highway all the time. Some of those don’t hold up very well.”

Diesel-powered air compressors, on the other hand, are designed specifically for heavy-duty applications. “They’ll have a module with an engine and a rotary screw airend that are really designed to take the stresses of traveling down the highway,” says Bailey. “They can take years of abuse instead of [a gas-powered model] that measures in months.”

“Diesel engine-driven air compressors are very good in cold weather and can be tied into the truck’s fuel if the vehicle takes diesel,” says Raymond. They are easily transferrable between vehicles, and can run without the truck engine being turned on, saving fuel. “However, diesel engine air compressors can be expensive to purchase and expensive to fix. They’re also very heavy, taking up precious payload on your truck.” 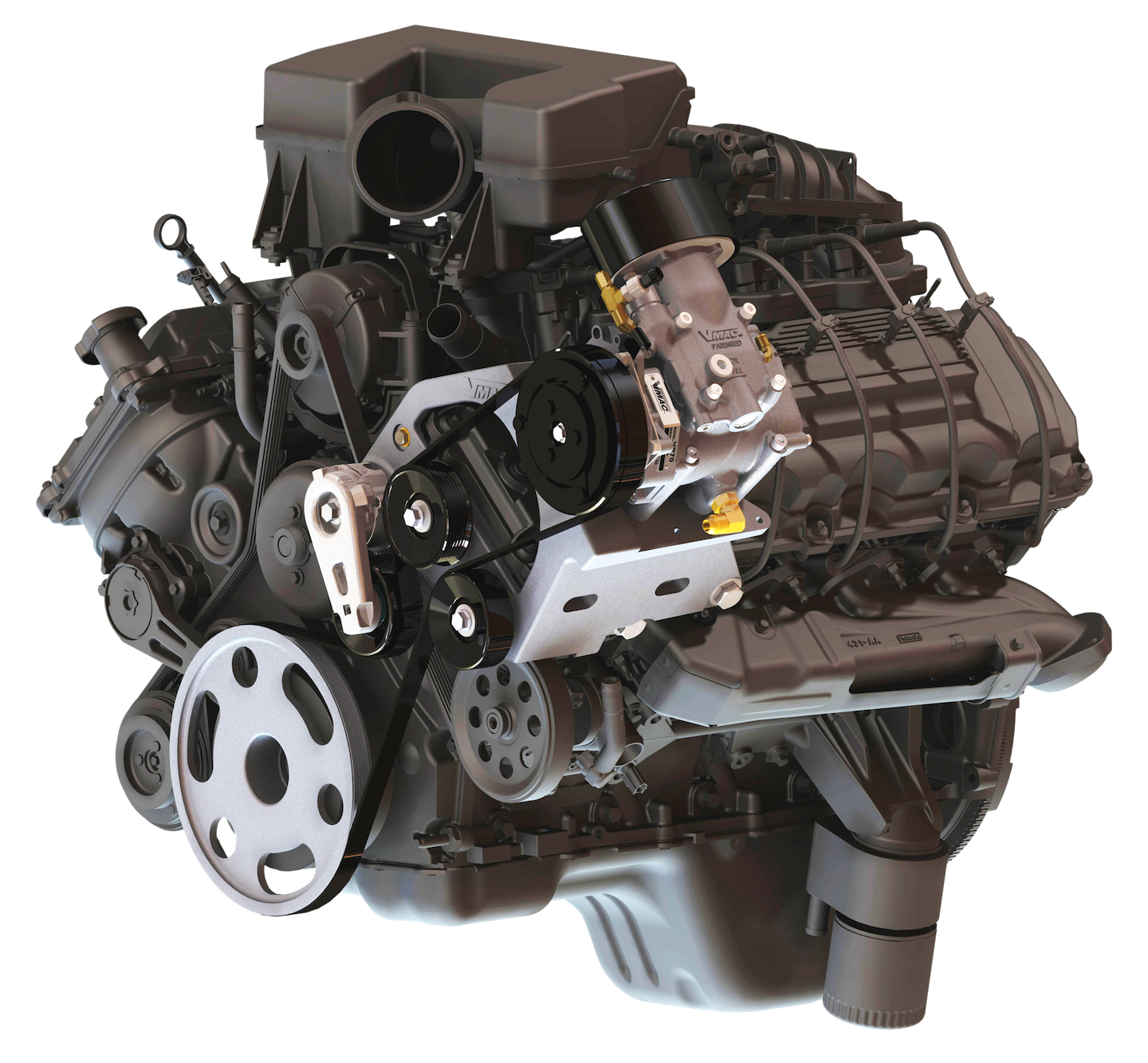 Underhood compressors install under the hood and are belt driven by the vehicle engine. Image source: VMAC

Under-deck PTO-driven compressors are mounted to the chassis frame. “By utilizing the chassis frame... PTO air compressor systems provide some inherent advantages, including saving bed space on the truck, reducing weight on the vehicle, eliminating the need to purchase an additional Tier 4 Final engine system by using the vehicle’s [engine],” says Strathman. “Being integrated on the truck’s frame also reduces theft and insurance costs.”

PTO-driven models are known for their longevity, as well as their reliability in winter. In addition, they tend to run at a lower rpm than, say, an underhood compressor and thereby reduce the amount of fuel consumed during operation, says Strathman. With available space under the chassis, they can also be configured with other functions, like a generator.

Because they are vehicle specific, these compressors are not transferrable to just any truck. “Under-deck PTO air compressors are more expensive and heavier than other options, as well,” says Raymond. “They’re run by the truck, which means it increases fuel consumption and truck idling hours.”

Underhood compressors are also integrated with the vehicle, but are installed under the hood. “Underhood air compressors are the lightest weight option, and they don’t take up any space on the truck,” says Raymond. “Due to their placement, the air compressor is protected from the elements and cold weather, and there’s no chance of theft.”

Underhood air compressors provide air on demand and do not require an air receiver tank. But as with under-deck systems, they can require a greater upfront investment, are harder to transfer to another truck and can increase vehicle fuel consumption and idling hours.

When choosing between onboard compressor configurations, make sure you assess the impact the compressor will have on the vehicle. 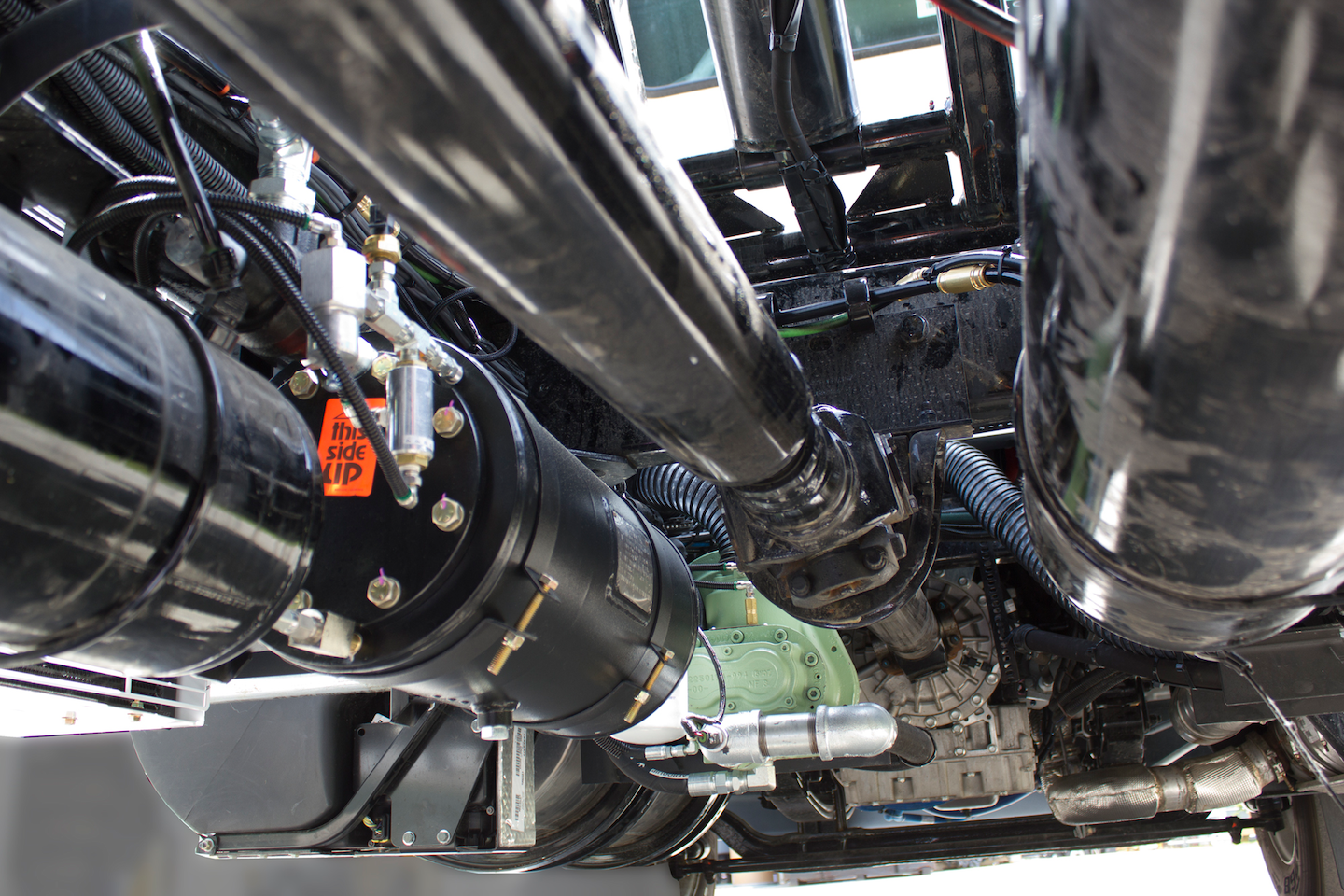 When deck space on the vehicle is at a premium and your air flow requirements allow it, an under-deck or underhood configuration can be an effective solution. “The below-chassis mount compressor is fueled from the onboard fuel tank of the truck, so it’s out of sight and out of mind,” says Bailey. “You just hit the button and you have air. You don’t have to service or fuel a separate engine. That’s really the benefit.”

Self-contained models also require regular service of filters and fluids, which can be challenging depending on their position on the vehicle. Fortunately, some manufacturers offer utility models designed to mount behind the cab which include readily accessible service outlets on the side of the machine.

How long you plan to keep a vehicle in your fleet is a factor to keep in mind, as well. "If the plan is to keep the truck for at least five years, an under-deck or underhood air compressor is a great option,” says Raymond. “If the truck is very old, or it will only be used for two or three years, then it might not be worth it to invest in a vehicle-integrated air compressor. Instead, choose a hydraulic-, diesel- or gas-driven air compressor that can be easily transferred to the next vehicle."

In order to determine the correct onboard air system for your application, Dean Strathman, Vanair, advises answering the following questions:

Weighs 30% less than the standard steel model yet still offers the functionality of five units in one machine
Vanair Manufacturing
March 18, 2020

The HPS allows companies to reduce their carbon footprint by operating hydraulic equipment without the use of the chassis engine.
American Eagle Accessories Group, a division of Stellar Industries, Inc.
March 16, 2020

Come along for the ride as a real user shares a first-person experience of a standard service call using the VMAC UNDERHOOD 40 vehicle-mounted air compressor.
VMAC
December 16, 2019

Vanair has ventured away from traditional tank design and introduced a new design with integrated manifolds as well as technology advancements to minimize downtime and improve maintenance
October 9, 2019

VMAC will offer over 25 different systems engineered to fit with 2019 trucks and vans by Ford, RAM, GM/Chevrolet and Mercedes/Freightliner
VMAC
January 24, 2019

Everyone wants a vocational vehicle versatile enough to accomplish almost any task; however, this is not financially practical. Understanding demand can save you money in the long run.
October 12, 2018

Self-sufficient unit has its own diesel engine to provide up to 10 gpm at 2,000 psi from a single, adjustable tool circuit
HIPPO Multipower
July 17, 2018

Cummins Battery Electric (BEV) system will provide pure electric power with zero emissions on a single charge at the point of use, intended for the most environmentally challenged locations.
Cummins Inc.
April 23, 2018
Follow Us