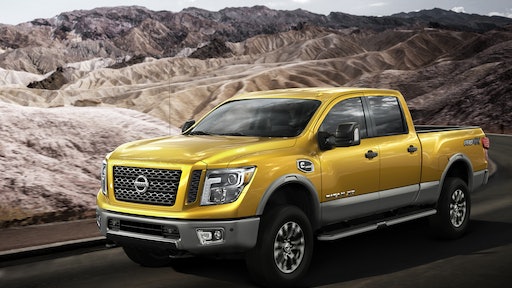 The 2016 Titan XD crew cab is designed to combine the capability of a heavy-duty hauler with the drivability and affordability of a light-duty pickup.

Nissan expects to blur the line between light-duty and heavy-duty pickups with its 2016 Titan XD crew cab by offering it with a Cummins 5.0L V8 turbo diesel rated at 310 hp and 555-ft.-lb. of torque.

The Cummins diesel -- designed specifically for light-duty use -- is the heart of Nissan's Titan XD. A compacted graphite iron (CGI) engine block, aluminum heads and composite valve covers reduce weight. It's the first commercial application of Cummins' new M2 two-stage turbo system. Nissan chose to mate the engine to a heavy-duty six-speed Aisin automatic transmission, and an electronic locking rear differential is available on the 2016 Titan.

To take advantage of the XD powertrain, Nissan offers a frame-integrated gooseneck hitch in the bed in addition to the rear tow hitch. The XD's 151.6-in. wheelbase is about 20 in. longer than non-XD Titans. Radiator cooling capacity has been increased more than 25% compared to the previous Titan model.

The Titan also includes a RearView Monitor with Trailer Guides, while the Around View Monitor (AVM) provides a "bird's eye" view of the surrounding area from front, rear and side cameras to help with parking and navigating tight spaces. The system also includes Moving Object Detection (MOD), which helps the driver to detect vehicles, shopping carts or other large objects when backing out via an on-screen notification and warning chime.

The Titan XD Crew Cab is the first of three cab configurations, two frame sizes, three powertrain offerings and five grade levels to eventually be available in the Titan lineup. The Titan Crew Cab XD has a 151.6-in. wheebase and 242.9-in. overall length. You have a choice of 17-in, 18-in., or available 20-in. aluminum wheels.