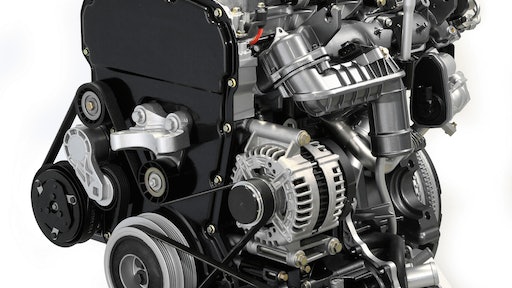 What Ford calls a "clean-running" 3.2-liter Power Stroke five-cylinder diesel will be an engine choice to power the full-size 2014 Transit van in North America, along with the the 3.5-liter EcoBoost gasoline engine proven in the F150.

“Commercial van drivers spend most of their working hours behind the wheel. We know they want a fuel-efficient diesel engine with smooth, responsive performance and low operating costs,” said Joe Bakaj, Ford vice president of Powertrain Engineering. “The 3.2-liter Power Stroke engine has been developed and proven globally to deliver a world-class combination of power, fuel economy and refinement.”

While power has not been certified for North America, the new diesel engine is rated in Europe at 197 horsepower and 347 lb.-ft. of torque. Ninety percent of its peak torque is available at engine speeds from 1,700 to 3,500 rpm.

Some of the 3.2-liter Power Stroke's other technical features:

All Transit engines are mated to a Ford 6R80 six-speed automatic transmission.

The Power Stroke 3.2-liter is manufactured in Ford’s Struandale Engine Plant in Port Elizabeth, South Africa. It will be exported to Ford’s Kansas City Assembly Plant in Claycomo, Mo., where the North American Transits will be assembled.