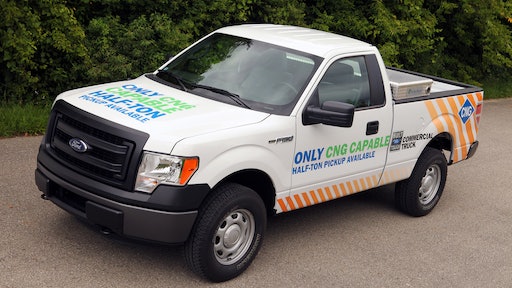 Ford will offer the 2014 F-150 truck with a gaseous-fuel-prepped 3.7-liter V6 engine able to run on compressed natural gas or liquefied petroleum gas. Ford expects to be the only manufacturer offering a CNG/LPG-capable half-ton pickup. Gaseous-fuel pickup truck offerings have been dominated by heavier trucks.

Ford says an F-150 with a CNG/LPG 3.7-liter V6 is capable of achieving more than 750 miles on one tank of gas, depending on the tank size selected.

“With the money saved using CNG, customers could start to see payback on their investment in as little as 24 to 36 months,” said Jon Coleman, Ford fleet sustainability and technology manager.

The gaseous-fuel prep package includes hardened valves, valve seats, pistons and rings so it can operate on either natural gas or gasoline through separate fuel systems.

In the next year, Ford will offer eight commercial vehicles with a gaseous-prep option; more vehicles than any other full-line manufacturer:

AT&T is one of many Ford customers that are finding value in CNG. The communications giant recently purchased 650 F-350 chassis cabs with the CNG-prep option.

“We’re almost halfway to our company-wide goal of deploying 15,000 alternative-fuel vehicles by the end of year 2018,” said Jerome Webber, AT&T vice president, global fleet operations. “Vehicles such as CNG F-350s from Ford have helped us avoid purchasing 7.7 million gallons of gasoline over the past five years while reducing our fleet’s emissions.”

Ford has established a rigorous qualification program for vendors who fit alternate-fuel systems to its vehicles. The Qualified Vehicle Modifier (QVM) program is intended to help modifiers improve the quality of end results to achieve greater customer satisfaction and product acceptance.

Ford maintains the engine and powertrain limited warranty (five years or 60,000 miles); the QVM is responsible for the system component warranty.

Compressed natural gas is mainly composed of methane. It is stored and distributed in hard containers at a pressure of approximately 3,600 psi. About 85 percent of the CNG used in the United States is produced domestically.