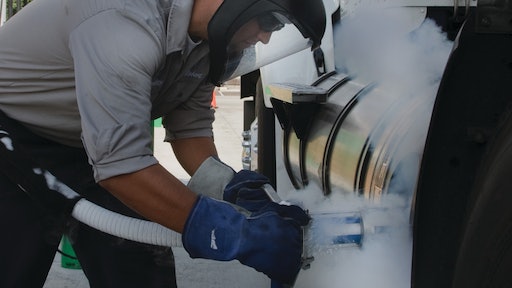 Refueling an LNG storage tank on a class 8 heavy-duty truck.

This pricing makes natural gas very appealing. “In duty cycles that use a lot of fuel, there are customers that can pay back their vehicle in a year or a year and a half,” Kolodziej estimates.

“For a CNG tractor running 80,000 miles a year, you might see payback in less than two years without any government assistance,” says Greg Treinen, segment manager - vocational segments and alternate fuel product marketing, Freightliner Trucks. “On the other hand, for a vocational or local delivery customer running 20,000 miles or less, that payback might end up being five years or more.

“The incremental cost of a CNG truck with a 9-liter engine is in the $40,000 to $45,000 range,” Treinen says. “Maintenance costs can be a little more on an annual basis — with more frequent oil and filter changes, and spark plug replacement — to the tune of $.01 to $.02 per mile. But remember, you are also not performing maintenance on or replacing any diesel aftertreatment equipment or fuel injectors.”

In construction, getting sufficient utilization can become a challenge. “Of all the market segments, construction has been one of the slower industries to adopt natural gas,” says Treinen. “This is mainly due to the fact that these are markets where the trucks, in many cases, aren’t driven the number of miles necessary to experience the fuel cost savings to achieve a quick payback.”

Natural gas is available as compressed natural gas (CNG) or liquefied natural gas (LNG). “The main advantage for both fuel types is cost,” says Roy Horton, Mack Trucks alternative fuel and driveline marketing product manager. “CNG is approximately 40 percent to 50 percent less than diesel in many areas. Some areas have greater than 50 percent delta between the CNG and diesel, such as in Oklahoma. LNG, while still developing in most areas, is between 30 percent to 40 percent less than diesel.”

Which is Best for Your Heavy Trucks: CNG or LNG?

“Fuel selection is driven by economics and availability, among other factors,” says Scott Fiveland, GAS new technology manager, Caterpillar. “Since natural gas offers savings to customers due to lower fuel operating costs, Caterpillar expects natural gas growth to explode. The economic savings, depending on the natural-gas-to-diesel fuel delta, can translate to more than a 50 percent savings to the customer in operating fuel costs.”

Demand is being driven by big fuel burners such as railroads and mining operations. “A locomotive will consume 300,000 gal./year,” says Paul Blomerus, senior director, high horsepower corporate development, Westport Innovations. “The biggest mine trucks can more than double that. The economic motive is extreme. The business is growing where the volume is large (Class 8 or smaller trucking) or where the fuel burns are large. The middle will fill in and it will benefit from the new engine technologies developed.”

At approximately 1.6 percent of the combined total heavy-truck fuel market in the U.S. and Canada, volumes today are still considered a niche market. But Horton predicts, “We will see growth to levels approaching 10 percent in the future, which will establish natural gas power as a mainstream segment, especially in refuse, construction and local/regional distribution applications. We have several vocational customers working to replace their diesel trucks with natural gas power. The main interest remains from customers who have trucks that return home every night.”

The conversion to natural gas will take time. “We see natural gas becoming a much larger piece of our production over the next few years as the infrastructure grows and engine offerings continue to expand,” says Treinen. “That said, we still expect diesel to remain the dominant fuel for truck fleets for the foreseeable future.”

Mobile machinery is not the only place where there has been an interest in natural gas. Nadine Haupt, director of alternative fuels, Navistar, points out, “Natural gas is already significantly used in stationary applications in construction. Access to fuel is the key.”

Natural gas engine and fuel availability continue to expand. “We are in the stage of investment in both infrastructure build out and product development,” says Blomerus. “Where those two meet is a perfect storm of new products to meet demand and available cheap fuel. Then we will see an inflection point.”

However, a major industry hurdle is development of the distribution channel. “There are 2 million miles of natural gas pipeline delivering gas to almost every city and town,” says Kolodziej. “You have to get it from the underground pipeline to the vehicle, so fueling stations need to be built.”

There are about 1,100 CNG fueling stations around the country, with 20 to 25 new stations coming online every month. But they are not equally distributed, with most stations popping up in heavily populated areas. “The four counties around L.A., for example, have 100 stations,” says Kolodziej.

Salt Lake City has quite a few stations and growth is occurring in Oklahoma City, Tulsa and other key cities.

Treinen adds, “You are starting to see pockets where it [natural gas retailing] is starting to take off — NYC/Long Island, southeastern Wisconsin and the Texas Triangle to name a few.

“The industry’s strategy has been to go after return-to-home fleets first, where one public station can serve several fleets in an industrial park. Once there are enough stations, you can go after other fleets, the ones that don’t return to a depot every night,” he explains. “After these natural gas fueling communities [hubs] develop, the next step is place fueling stations along the interstate highways [spokes] that connect them. Through this hub-and-spoke approach, a national CNG fueling network is being created.”

“The Eastern to Midwestern region has a healthy natural gas pipeline infrastructure, enabling customers to adopt natural gas for heavy truck use,” Horton points out. “CNG infrastructure is more readily available and adaptable in these regions due to the pipeline availability.

“LNG infrastructure is more challenging in these areas, but we are seeing improvement as a result of the recent investments by fuel providers,” he states. “Of course, California and Texas are also hot spots for natural gas, while the infrastructure for both types of fuels continues to improve.”

Fuel availability is critical to the speed of growth. “A number of options can be employed in key market segments, from on-site delivery in the case of LNG for key machines, or strategic fueling locations nationwide in the case of rail,” says Caterpillar’s Fiveland. “The successful deployment of LNG solutions will require the economics through the value stream from fuel to infrastructure to fuel use. We expect the economics to look attractive through this business value stream.”

Another hurdle to adoption is the availability of natural gas engines. Finding the perfect size engine for many applications can be difficult.

There are gaps in the engine size range, including a critical gap between 9 and 15 liters. Numerous companies use the 9-liter natural gas engine on Class 8 trucks. “That only works if you are working on flat terrain,” says Kolodziej. “Even there you are working that engine pretty hard.”

“That is why the 12-liter Cummins Westport engine that is supposed to come out in April is exciting for so many people,” he adds. “In many cases, the 8.9-liter is too small and the 15-liter is too big.” A 12-liter natural gas engine hits a sweet spot for many in the Class 8 truck market.

Mack is among several companies that will capitalize on the new 12-liter offering. “We remain on track to provide the ISX12G-equipped Mack Pinnacle and Granite models this year,” says Horton.

Freightliner is also expanding its lineup. “We have been building natural gas trucks for the vocational market over the last four years in our M2 112 truck with the ISL G,” says Treinen. “In late 2011, we began production on the all-new 114D SBA — designed for severe-duty applications — with the ISL G. We are planning on expanding the 114SD lineup to include the ISX12 G.”

The storage volume required per unit of energy is larger for both fuels. “LNG requires a volume of about 1.7 times that of diesel to store an equivalent amount of energy,” says Caterpillar’s Scott Fiveland. “CNG systems, depending upon the degree of pressurization (usually 3,600 psi), require upwards of four times relative to diesel and 2.5 times relative to LNG. In key industries, LNG fuel systems will be designed to continue to meet key customer requirements while not sacrificing payload, etc.”

Natural gas storage tanks and more complicated fuel delivery systems will add cost the initial purchase price of the vehicle. “CNG requires roughly four to five times more chassis packaging space than the equivalent diesel volume, while LNG requires approximately two times the space,” says Roy Horton, Mack Trucks. “Due to the cryogenic nature of LNG, handling and facility impacts are also more challenging than diesel. And the new fuel management mindset required for LNG (use it or lose it) is also a negative.”

This makes adoption more difficult. “We do not see a demand for LNG within the vocational market,” says Horton. “The utilization rate for these trucks is typically not at a level that would benefit from this type of fuel. LNG is better suited for applications that have usage cycles and longer distance requirements.”

Greg Treinen, Freightliner Trucks, agrees, noting, “We have only sold a handful of LNG vehicles in straight truck configurations. The problem with LNG in vocational markets is that the trucks are not constantly running like over-the-road tractors. If LNG fuel is not used, you risk losing it because, as the LNG warms as it sits in the tank, it reverts back into a gas form and expands, causing it to vent out of the tank.”

This makes it harder to justify for vocational use, where vehicles may sit idle for extended periods of time. “The storage issues — the fact that LNG vents when pressure/temperature increases — will drive customers to CNG over LNG unless they are in a high fuel usage application where a vehicle is in continual use,” says Nadine Haupt, Navistar.