Heavy equipment theft in 2014 was up 1.2% from 2013 with mowers, loaders and tractors topping the list of equipment stolen last year 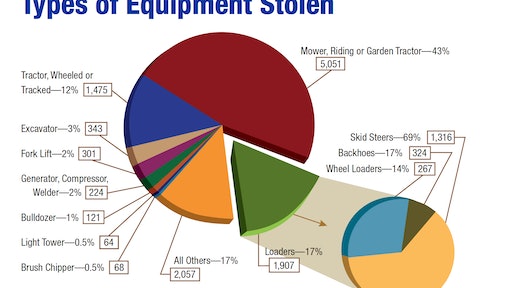 Two key factors determine the type of equipment that thieves are most likely to steal: value and mobility. Value is the primary factor, except for items too large to move on a small trailer. For instance, large excavators are valuable but seldom stolen, as they’re difficult to move.

The top five cities with the most thefts were:

The three most stolen heavy equipment items in 2014 were:

Heavy equipment manufactured by John Deere was the number one theft target in 2014 followed in order by Kubota Tractor Corp., Bobcat, Caterpillar and Toro.

As for recoveries, only 23% of heavy equipment stolen in 2014 was found, making it a costly crime for insurance companies, equipment owners and rental agencies.

“Having the support and cooperation of the manufacturers is critical to the efforts to combat this kind of theft,” said NICB President and CEO Joe Wehrle. “In an effort to increase the recovery rate, we encourage the manufacturers to share information and work with us to prevent theft and recover stolen equipment.”

All construction material prices increased during January for the first time since 2018, NAHB measured a 14.5% increase in new home construction permits in 2020, PCA forecasts 2021 regional cement consumption to be led by a 3% increase in the South
March 4, 2021
Latest

Proposed changes to the hours of service rule allow truckers to have more flexibility in their schedule, but raise safety concerns for short-haul drivers.
Mackenna Moralez
August 29, 2019

Frameless all-glass, tailgate-formed rear door follows the styling of each truck’s tailgate by forming the glass down and over the tailgate
A.R.E. Commercial Division
November 12, 2018

Drawers can each hold up to 400 lbs. and are made from 16-gauge steel
Tuffy Security Products
October 15, 2018

[VIDEO] Can Your Trailer Alarm Do This

How to Select the Right ELD for Your Trucks

Electronic logging devices all have different capabilities. Select the solution that best fits the needs of your work truck fleet.
Curt Bennink
August 15, 2016