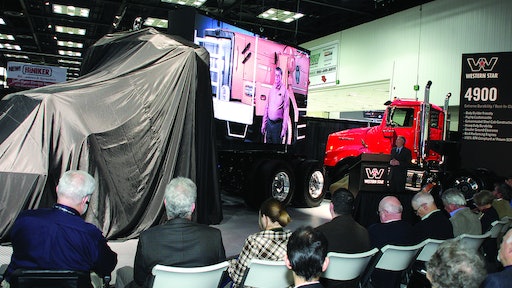 FARMINGTON HILLS, MI —The Work Truck Show 2011, held in conjunction with the 47th Annual National Truck Equipment Assoc. (NTEA) Convention at the Indiana Convention Center in Indianapolis, IN, March 8-10, broke all event records. Verified show attendance was 10,020 — a 24% increase over 2010 and a 10% improvement over the previous record of 9,084 set in 2007. With an unprecedented 560 exhibitors occupying 16% more floor space than in 2010, the Work Truck Show 2011 was also the largest in the event's 12-year history.

"We had a great week in Indianapolis," says Jim Carney, NTEA executive director. "The overall feeling was one of renewed optimism in the future of the industry."

"Green" was a prevailing theme at the Work Truck Show. Many products that improve work truck fuel utilization were introduced. Show attendees took advantage of the opportunity to test drive a record 21vehicles in the Green Truck Ride-and-Drive on March 8 and 9. The Green Truck Summit also had record participation. Verified attendance at the Green Truck Summit was 683, an increase of 21% over the 2010 Summit. This is the fifth year for the Summit, which is jointly produced by NTEA and CALSTART.

The Work Truck Show returns to the Indiana Convention Center next year, and booth space is already selling quickly! Mark your calendars for March 6-8, 2012, with educational sessions, including the Green Truck Summit, kicking off March 5. Online registration opens at NTEA.com in October.

Too much truck wastes resources and drives up ownership cost while too little truck compromises safety and increases downtime and maintenance costs.
Curt Bennink
June 14, 2019

It is rare that Ford introduces a new model addition to the Super-Duty lineup, but the company found a niche with an F-600 with max. GVWR of 22,000 lbs
Curt Bennink
March 5, 2019

Peterbilt will have more than 30 electric vehicles in operation by the end of 2019 with customers representing the refuse, regional haul, and city delivery applications.
Peterbilt Motors Co. - Paccar
January 16, 2019

Trucks in production and started shipping on December 19.
Chevrolet
January 3, 2019

‘Our upfit partners are ready to add employees to meet the demand, but many are having challenges finding qualified candidates’
September 25, 2018