How Do You Pave on an Island?

Miozzi Paving uses warm mix asphalt as a solution to paving on Block Island where there are no hot mix asphalt plants. 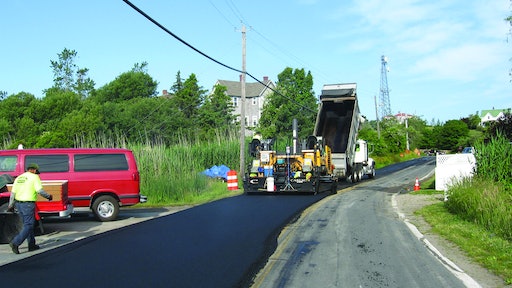 Located just off the coast of Rhode Island is Block Island, and perhaps typical of most island communities commuting by ferry is common for native and tourist alike. This same mode of transportation is also the only way that construction companies get to and perform work on the island.  Every piece of equipment, tool, vehicle, laborer, and of course material must be ferried across 18 miles of water from Port Judith.

Last year Block Island needed 1,000 tons of asphalt placed as a surface course on Chapel Street and on sections of Old Town Road. In the past when roads and properties on the island needed paving done a hot mix operation would simply set up a portable plant on the island and produce the mix for the job right there.

“The contractor and plant operators decided that if hot mix was used it would have to be produced above the normal allowable temperature limit, essentially over-oxidizing the material for it to have a chance to be hot enough for paving,” says Annette G. Smith, project leader at PQ Corporation. She says that high production heat, combined with the 2 ½ to 4 ½ trip from plant to ferry to jobsite, would likely have resulted in unworkable hot mix asphalt and a poorer-quality pavement, or certainly a pavement that wouldn’t last long.

But the contractor who was awarded the bid, T. Miozzi Inc., Coventry, RI, and owner of Miozzi Paving Co., North Kingstown, RI, had another idea: Warm mix asphalt using an additive called Advera® WMA. Produced at temperatures between cold mix asphalt and hot mix asphalt, warm mix asphalt is designed to withstand longer transport times between production and laydown without any adverse effects on density, workability, or pavement life.

“We were not completely sure how the warm mix asphalt would work out but we are confident of our own capabilities as a producer and paving company,” says Thomas Miozzi, the company’s president and owner. But he was well aware there was a concern to overcome.

“There was the obvious question, ‘Can we sustain enough heat in the material to make the working of the asphalt doable for our crew?’”

The answer, it turns out, was yes.

Getting the Job Done

Smith says warm mix was stored in a silo overnight so it was ready for transport early the next morning.  She says temperature out of the silo was between 280 and 285 F when it was loaded into the haul trucks, which were then tightly tarped for the journey over the water, then driven onto the ferry. Ferry trips took 90 minutes and the ferry trip of each day carried a six-person paving crew, equipment and the warm mix.

Smith says mix in the trucks that came over on the first ferry waited as long as 4 ½ hours from load to laydown while the crew prepared the pavement. “The crew came over with the equipment and the first load,” she says. “Initial prep work was done in advance, the final preparation was done once the material and crew arrived.”

Smith says warm mix placed from the early trucks that sat longest was placed at about 250F, but after the first ferry trip Miozzi scheduled the loads so three trucks arrived at the jobsite every two to 2 ½ hours.  “As the day went on and the prep work was minimal, the haul was more like 2 ½ hours and mix was placed at 270F,” Smith says.

“They placed the mix into a Blaw-Knox PF 6110 tracked paver with a Carlson IV screed directly from the truck,” Smith says. “The mix placed like hot mix but at cooler temperatures with no visible fumes.”

She says the Miozzi crew had both Ingersoll Rand DD-90 and DD-90HF rollers on site. “Breakdown was done at placement temperatures, roughly 250 F. Finish rolling was done about 180F,” she says.

Smith says the entire job took a little more than two full days with work each day focused on paving. “It was slow going with a lot of driveway tie-ins, sewer covers, and tack placement. The road had already been prepped, so there was only the cleanup of sweeping the loose dirt and some cut-in to existing asphalt to make good joints,” Smith says. “In some instances the crew had to put down a leveling course in areas which required more attention.” She says the same WMA was used for both leveling and surface course.

“They did not need to rush to get it paving done and they did not make any alterations to the paving operation in order to complete the job,” Smith says.

Smith says the crew said equipment and tools handled the WMA the same as HMA “but with less fumes.”

Crew members said their skill set was the same as they needed for HMA. Skill set the same for hot mix asphalt.  “However it does give a longer window, so compaction is better even at cooler temperatures.”

“This really was an incredible experience,” Miozzi says. “On top of the length of time between producing the material and then laying it down we experienced much lower emissions both at the plant and at the paving site on the island.”

Frank Perri, technical consultant hired by Block Island to inspect the job, came away impressed with the warm mix application.

“The material was applied in the same way,” Perri says. “The material, even after all that time, was very easy to work both in putting the asphalt down on the surface, the raking, the rolling. It was just as easy to work as I’ve seen in hot mix.

“In this case the main difference was that the temperatures taken at different points on the job and at different times throughout the work was significantly lower than what hot mix temperatures would have needed.”

Perri says he was surprised by the ability of the mix to retain heat as long as it did, especially considering it was produced at a lower temperature.

“Look, you couldn’t take hot mix and spend the travel time, much less store it overnight, without losing the heat needed to keep the material flexible and workable for your crews,” he says. “Reducing the material temperature is one thing but to sustain that working temperature for as long as this material was kept at is really outstanding.”

Smith says the Block Island project, which was the first warm mix asphalt job in Rhode Island, came off great. Not only were local officials pleased with the results but this entire process might have changed the way that they do any project needing asphalt in the future.”

Not all jobs have the logistical nightmares of the Block Island project, but that doesn’t mean contractors shouldn’t consider warm mix asphalt.  Here are a few ways it can help you out:

The emissions issue is something that should not be overlooked, but usually is by contractors.  Everyone, asphalt employee or not, quickly recognizes the ?

Contractors interested in learning more about warm mix asphalt and how it affects everything from labor to machinery to job quality can attend "Warm Mix Asphalt and Its Impact on Your Paving Operation" Saturday, Feb. 5 at National Pavement Expo in Nashville.

Presented jointly by James Curtis, Chec Management Systems, and Don Rooney, Pioneer Paving & Grading, the 90-minute program will provide the points of view of a consultant who specifies WMA on jobs and a paving contractor who has used WMA on jobs including a parking lot project.

For more information on session D-30 at NPE visit www.nationalpavementexpo.com.