Demonstrated for the first time at the 2004 World of Asphalt show earlier this year in Nashville, Aspha-Min tested on Charlotte road project. 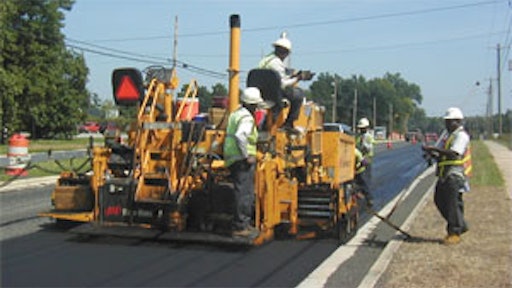 Warm asphalt, a mix design that can be produced at a lower temperature — resulting in lower energy costs and reduced pollution — has made its way to the streets of Charlotte, NC.

Blythe Construction, a Hubbard Group Co., put this European-developed technology to the test in September on a stretch of Old Statesville Ave. (Hwy. 15) in Charlotte. The technology was actually developed by the Hubbard Group's parent company, Eurovia. The main objective in developing the warm mix technology was to reduce pollution at the plant and during placement.

To understand the benefits of using a warm mix, it's best to start with an understanding of the Aspha-Min additive.

Berry Hall, quality control manager for Blythe Construction, Charlotte, says the Old Statesville Ave. project is the first real application of the Aspha-Min warm mix in North America, and the project should provide quantifiable results for asphalt contractors and road agencies regarding warm asphalt as a viable option.

Blythe's Charlotte project called for 220 tons of the warm mix containing the synthetic zeolite foaming agent.Construction specifications called for turning the two and half mile two-lane road into a divided four-lane road, with the proposed warm mix being used as the surface course on an approximate 1,500-foot stretch of one of the travel lanes.

There were no changes required at the production plant when blending the warm mix, other than lowering the temperature required to activate the Aspha-Min foaming agent. Blythe produced the warm mix at its Lake Norman Astec parallel-flow drum plant in Lowesville, NC at a temperature of 270 degrees F (conventional hot mix asphalt is produced at the plant at 315 degrees F). The plant is equipped with a single-shaft pug mill coater box where the Aspha-Min was added using a mineral feeder.

The production temperature allowed the mix to reach the jobsite for placement at approximately 270 degrees, giving the paving crew and rolling crew plenty of time to work the mix before the temperature dropped below 212 degrees. That's the temperature the binder begins to set and can no longer be worked.

Hall used a Blaw-Knox 4410 paver, a Dynapac DD90 high-frequency and a Caterpillar 634 roller for placement and compaction of the warm mix mat. The warm mix design not only reduced CO2 emissions at the plant, but also the typical "blue smoke" that's emitted at the paver during placement of conventional HMA designs.

The added cost of the Aspha-Min foaming agent ($3 to $4 per ton — six pounds of the Aspha-Min powder is added to each ton of mix) on this project was offset somewhat by the lower fuel costs required to produce the mix, according to Hall. However, those costs could be reduced significantly if more projects specify the warm mix design, allowing contractors like Blythe to purchase a bulk supply of the Aspha-Min powder. On this particular test project, Hall had to airfreight the powder needed from his parent company's supply in Europe.

"Our primary concern on this particular application is not the potential energy cost-savings offsetting the additional cost of the Aspha-Min foaming agent, but rather to get the North Carolina DOT (Department of Transportation) onboard with this technology," Hall says. "We wanted to construct an actual road project with this asphalt technology to give the DOT an opportunity to evaluate whether or not they want to expand usage of this particular mix on other projects."

Like any other Superpave project Hall constructs for the DOT, this one had to meet a 100 gyration mix requirement and a minimum 92 percent density once compacted.

Warm mix applications used on projects in Europe, as well as tests conducted by Hubbard in Florida have indicated Aspha-Min's versatility in a variety of designs.

The mineral composition of the mix, the addition of recycled asphalt, the type and amount of binder, and the addition of other additives do not have an effect on the mixing time, performance or characteristics of a warm mix asphalt prepared with zeolites. Adding Aspha-Min into the mixing process did not create any special problem or limitation from a storage or handling point of view, according to Jean-Pierre Marchand of Eurovia.

By reducing the mixing temperature 50 degrees F lower than what's required for conventional hot mix designs, energy consumption was reduced, as well as CO2 emissions into the atmosphere. A lower level of fumes and odor at the production plant and during placement also enhanced the environmental performance of the warm mix asphalt.

Additional benefits include reduced oxidation of the bitumen when mixed at a lower temperature, which results in extending the durability life of the pavement.

Hall hopes the Charlotte project will be the first of many to use the warm mix technology. The future for this new emerging process looks promising, but government road agencies will certainly evaluate the performance benefits of this asphalt option, especially if any additional costs are passed on to them.

"We were very pleased with how easy the mix went down and we were also able to achieve a half percent higher density than what we normally achieve with conventional mixes," Hall says.