In the Heat of the Night

The paving of Interstate 70 in Missouri threw its share of challenges at APAC-Missouri Inc., but the company still managed to meet its objectives and win an award for its efforts. 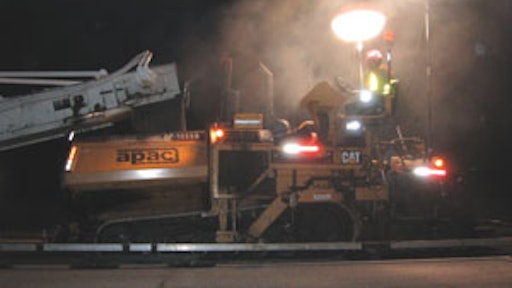 The Missouri Department of Transportation (MoDOT) website states that travel on Interstate 70, which runs east/west through Missouri connecting Kansas City and St. Louis, can be "daunting" at times.

One of these daunting stretches of I-70 that was recently improved contained ruts two inches deep, transverse cracking, and a concrete pavement base in need of repair. This 10-mile stretch of the westbound lanes and shoulders of I-70 was one of the worst sections of interstate in Missouri. That is, it was until APAC-Missouri Inc. came along and paved it. The company's work on I-70 earned it a 2003 Quality in Construction Award from the National Asphalt Pavement Association (NAPA).

Under the cover of darkness

MoDOT mandated that the work on this section of road be done at night, since I-70 is a busy roadway and closing down lanes during the day would have made for a miserable experience for drivers. Working at night, when traffic counts were down considerably, also allowed APAC-Missouri's operations to flow along more quickly and smoothly than they would have during the day.

Each night, the crews from APAC and its subcontractor made their way down I-70 one lane at a time. APAC subcontracted out the milling and sweeping to Columbia Curb and Gutter. APAC followed closely behind the milling and sweeping with the paving operation for the first lift. The APAC crew also moved traffic control devices along with the paving operations, allowing traffic on the areas they paved that night. APAC had to tear down its paving operations every morning in order to open up all lanes for daytime traffic.

Night paving met the crew with some challenges, too. Night paving demands extra care in the paving process since temperature fluctuations that occur at night can influence asphalt density. The APAC-Missouri crew used a nuclear gauge to measure the constant changes in density and had to adjust their paving operations accordingly.

To battle the darkness, APAC used halogen balloon lights, which can light up to 15,000 square feet without blinding oncoming traffic. However, Chad Girard, area manager at APAC, explains that despite the lights, at times it was still difficult to see irregularities in the mat, upcoming problems in the existing pavement, and whether the new pavement matched the previously paved lane in order to avoid a raised joint. Moving away from the lights was even worse.

"Even though our equipment was lit up very well, anytime a person walked away from a piece of equipment to check density, profilograph, or move barrels, it was hard to see," he says. "And it was harder for traffic to see the crew members even though they did have reflective apparel on."

Girard says other challenges of night paving include getting enough people to cover the task of traffic control at night. The company held extra safety meetings and outfitted employees with reflective gear to prepare them for their night shifts. Other issues weren't so easy to plan for.

"Things you normally take for granted, such as going to a parts store and getting a simple hose or belt, is almost impossible to do during the middle of the night," Girard says. "Simple repairs like that can shut down a night operation in a hurry."

Girard says one of the biggest challenges on the I-70 job was the unknown. The crew had no idea what they would find underneath the milled-out asphalt. What the crew did find was a lot of patching needs.

"One of the major obstacles to this project was that the road was deteriorating in front of the paver during the construction, so we had to have a crew in front of the laydown operation patching," Girard says.

APAC did about 4,100 square yards of concrete patching. The day after paving a section, APAC encountered many concrete blow-ups, where aged concrete that was exposed after the milling process expands with the heat of the day and the heat of the hot mix asphalt and actually blows up. Some of these blowups created bulges up to 10 inches high in the road. These blowups happened on weak concrete areas that hadn't been patched because they didn't appear to need patching.

When a blowup occurred, the crew had to shut down a lane and patch the blowup. This entailed tearing up the new asphalt and the old concrete that had blown up. Then crew poured new concrete level with the top of the first asphalt lift. These concrete patches would be covered by the second lift of asphalt. Although the state didn't allow paving during the day, it did allow the crew to repair these concrete blowups during the day. Because of the condition of the underlying concrete, APAC had little else choice than to accept the blow-ups and fix them as they occurred.

The more lifts, the better

After the milling, patching, and first lift were completed, APAC began the second and final lifts, eventually laying about 100,000 tons of total mix. The original contract called for the base course to be one 4-inch lift, but APAC worked with the state to have this changed to two 2-inch lifts.

"The more lifts you lay, the smoother the pavement usually becomes," Girard explains. "Each lift gives you the opportunity to take out bumps from the previous lift. When covering existing concrete this is very crucial since the first lift is usually rough because the hot mix causes the joint sealer in the concrete to rise and expand, causing large bumps in the first lift.

"The state usually likes thicker asphalt lifts because it allows the contractor to use larger aggregate and less oil, reducing the price of the mix. In this case, the extra incentive for the ride and the better end product made it feasible for us to lay two lifts of base instead of one single lift."

Despite the numerous challenges with the road, APAC received a 105 percent pay bonus for ride smoothness on the project. The eastbound lanes of this stretch of interstate will be paved in the spring of 2005.