Traffic causes it, but here is how you can predict and eliminate this problem. 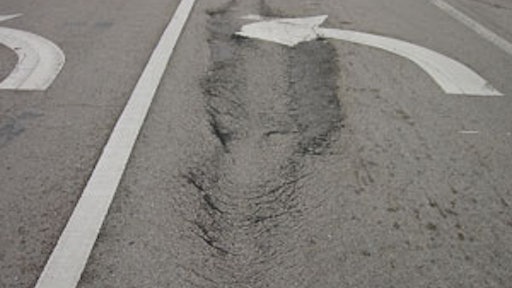 Prevent Pavement Slipping" has the familiar ring of "prevent forest fires" or "prevent drunk driving." The thought of pavement menacingly slipping up on you brings a chuckle. However, for those responsible for the condition of roadways, pavement slipping is no laughing matter. The only effective repair is complete removal and replacement of the slip area. Therefore, prevention is always the best solution.

Pavement tears or slips if the tension caused by the traffic is stronger than the sum of the pavement's internal strength and the pavement's bond to the underlying layer. Analyzing these two components will assist in predicting and eliminating pavement slipping.

Heavy vehicles create much greater stress on the pavement, than light vehicles. A loaded tri-axle dump truck does the same damage to a pavement as 9,800 passenger cars. Therefore, heavy truck traffic is the most important factor in analyzing pavement deficiencies. A rolling vehicle at a constant speed applies most of its stress vertically to the pavement. Slippage is most likely where vehicles brake, accelerate or turn sharply. These actions try to pull the pavement apart by applying lateral tension to the surface.

Asphalt is very strong in compression, but relatively weak in tension. Asphalt shares this common characteristic with concrete.

Concrete is approximately 10 times stronger under a compressive load, than under a tension load. Under tension, asphalt cement, the glue that holds the pavement together, takes the majority of the stress. Since asphalt is a flexible pavement, it will strain slightly and may eventually crack as the traffic applies this stress thousands of times. If there is any weakness in the pavement, slippage can occur.

Slippage cracks have a typical U-shape that will indicate whether accelerating, braking or turning is the cause of the problem, because the pavement is literally pulled apart. As a heavy vehicle approaches an intersection and brakes hard, the top of the U-shaped crack will face with the travel lane. Conversely, if vehicles are accelerating, the U will face the opposite direction. If the vehicles are turning sharply, the U will pull to the outside of the turn. The top of the U-shape will always be in the direction the force is applied.

When planning a construction project, it's prudent to analyze the traffic flow to predict where high stress areas are likely to occur. The location of stoplights, turnouts and sharp bends in the pavement are areas that require consideration.

The two components that are available to resist the damage are the strength of the asphalt layer and the bond to the underlying surface. The ability of the pavement layer to resist this stress is mostly determined by the thickness of the layer. A 2-inch-thick asphalt layer will effectively have twice the tear resistance of a 1-inch layer.

The aggregate blend of the mixture has a small effect on its internal strength. However, stiffness of the asphalt cement and the presence of modifiers have a larger impact. In areas with very heavy lateral stresses, such as truck turning and racetrack corners, special polymer modified asphalts may be necessary to toughen up the mix to resist surface deformation. Modified asphalts can be difficult to obtain in small quantities and will increase the cost of the material from 25 to 50 percent.

Slippage problems can be prevalent on very thin overlays of ' inch to 1' inch without appropriate safeguards. The condition of the old pavement, the cleaning, or the application of tack are generally the causes of the problem.

A good tack, such as RS-1, RS-2 or AC-5, applied at the manufacturer's recommended rate and temperature is important for prevention. Uniform distribution of the tack is very important. Often distributors will have spray nozzles that do not spray properly, therefore, the tack is not uniformly distributed.

In some parts of the world, a rubber-tire roller is actually used behind the distributor to insure the tack is uniformly distributed in the construction area. A better solution, however, is a properly maintained distributor, run by a competent operator.

If the existing pavement in a high-stress area is polished and has a fine textured finish, it may be necessary to scratch the surface with a milling machine to allow for a mechanical connection between the layers, in addition to the adhesion bond. This technique is becoming more prevalent because it ensures a textured surface for the overlay to bite to and simplifies the complications of the tacking process. Thermoplastic "stop bars" should be milled off prior to overlaying.

To repair a slipped pavement it is necessary to saw cut and remove the old pavement. The limits of the sawed area must be outside the distorted area, so that a good seam to sound pavement is possible. The asphalt must be removed to the full depth of the slip, which is usually just the top layer. Inspection of the surface below the removed layer will often indicate why the pavement was able to slip.

If the underlying layer is oiled, seal coated, polished or dirty, it must be corrected before a new layer can be applied. It's often easier to scratch the surface with a small milling machine to ensure a tight connection between the layers. After this is accomplished, the pavement is patched normally. The alternative is to mill the slipped area into the next sound layer to complete both steps at once.

When the layer underlying a thin pavement is an aggregate base, it's important that the aggregate surface has a texture to allow the pavement to interlock with the rock particles. In the finishing process, if the rock is very wet and bladed and rolled to a slurry and smoothed to a very slick surface, the prime will penetrate into dust sized rock particles. This type of construction will build a weak joint between the two layers.

If the base-pavement joint is where the slipping occurs the pavement may not be thick enough to withstand the traffic stress. This means some of the base must be removed and a deeper layer of pavement laid to key the asphalt into the base. The other repair option is to replace the slipped area and overlay the whole area to thicken the pavement and provide additional strength.

When you analyze your next overlay, be aware of high stress areas so that you can include the appropriate cost for the prevention of slippage problems. If you believe the owner's proposed design is not suffient to avoid slipping, agree "up front" on the responsibility for the cost of repair. A slipping pavement can be a construction defect, an existing condition or a design flaw. Failure to consider the potential problems makes the lawyers happy and everyone else suffer.

The global event was originally scheduled to be held from April 4 to 10, 2022, but ongoing uncertainties related to the COVID-19 pandemic led the show organizer to delay the event to October 24 to 30.
Becky Schultz
April 23, 2021

What Earth Day Can Mean for Rental Business Owners