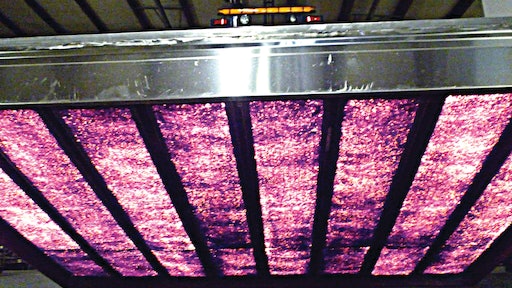 Infrared radiation is used to heat the asphalt pavement, softening it without damaging the asphalt 2 to 2-1/2 in. deep. Normal heat time is less than 7 minutes.

The infrared technique also provides superior repairs to roads, parking lots and driveways at savings of up to two-thirds the cost of conventional methods. As opposed to conventional repair, which requires the removal of old asphalt from a damaged site and its replacement with new asphalt, new infrared technology expedites repair by heating, fusing, and compacting recycled asphalt, saving equipment, labor, and new material in the process.

Commerce City, CO. “It also does a better repair then just filling a pothole or alligator cracking with new asphalt.”

Ortega says that using the city’s new asphalt repairing technology, purchased from Kasi Infrared Corp., Newport, NH, his road crew can load up a couple of tons of asphalt and be busy all day. He adds that, in addition to saving time, infrared repair technology enables his crew to recycle a substantial portion of the old asphalt, saving on materials costs as well.

“In the past we would take four or five tons out to the streets. But now, due to recycling, we just take out about a ton and a half or two tons at the most. That’s because you’re able to rejuvenate and reuse much of the asphalt being repaired.”

Although not a large community, Ortega says Commerce City is conscientious about keeping the 700 or so lane-miles of its roadways in good condition.

While public safety from road hazards is always a high priority, exposure to liability claims may also be important to many local governments, particularly those who are self insured.

“We take potholes and other types of failures very seriously,” Ortega says. “It doesn’t take much to create a hazard. It could be cracks or potholes or any type of imperfection. The infrared equipment has been a big help in overcoming problems quickly. You simply drop the heater on it, heat it up for awhile, rejuvenate much of the old, damaged asphalt, and then you resurface and seal it. The road surface is pretty much back to new when you’re done.”

Ortega adds that once sunlight has had time to bleach the new asphalt repair, it matches the original surface so much that you would be hard-pressed to locate the restoration.

The infrared equipment that Commerce City purchased is a trailer-mounted Kasi Proheat 2 Ton Minuteman model, a self-contained asphalt restoration system. It is ideal for permanently repairing all general asphalt defects including potholes, surface cracking, utility cuts, trenches, birdbaths and manholes. Kasi’s infrared pavement-heating panel with its stainless steel and inconel converters generates the infrared radiation used to heat the asphalt pavement, softening it without damaging the asphalt 2 to 2-1/2 in. deep. Normal heat time is less than 7 minutes. The system’s reclaimer keeps asphalt at plant mix temperature in any kind of weather, and can also reclaim stockpiled asphalt.

Using an infrared asphalt reclaiming and repair system, the savings on labor and repair time as well as materials are very substantial. Infrared restorations fuse to the existing pavement, creating a continuous surface. This eliminates the need for tack-coating the edges because the seams have been eliminated, enhances durability, and allows roads to be opened to traffic immediately. It also makes the repair process less expensive, since existing asphalt is recycled, crew size is typically limited to two; and only a single truck or trailer is used.

These benefits have made the use of infrared systems highly popular with independent contractors who service state and local governments.

“Going from traditional cut-and-remove asphalt repair to infrared repair has tripled our business and profit, while cutting our costs in half,” says Gustafson. “Instead of cutting, removing, and throwing away a traditional asphalt patch, we can use mostly recycled material. We can do a typical 5 ft. x7 ft. repair in less than 20 minutes completed with one piece of equipment, a truck, and two guys. Since cars can drive on it immediately, there’s almost no traffic disruption.”

Gustafson adds that previously his crew was throwing away five tons of asphalt a day from cutting and repairing. “Now we’re able to reuse that asphalt, which for us is a savings of about $650 per day,” he says.

To do the same 5 ft. x7 ft. cut-and-remove asphalt repair would typically take about five or six laborers several hours of work using a pavement saw to cut a straight edge around the damaged area, a jack hammer to break up the existing pavement, a bucket loader to excavate material, two trucks - one to remove excavated material and one to bring fresh asphalt - and a roller to compact the repair. It would also require enough new asphalt to replace all the excavated material.

Infrared asphalt repair withstands weathering and traffic to last much longer than conventional repair as well. “When a utility company did a compaction test on my infrared repair, it had a 95% compaction rate which is phenomenal,” says Gustafson.

Unlike conventional “saw, cut, and remove” or “crack filler” asphalt repair techniques, infrared asphalt repair has no seams for water and ice to penetrate. Instead, its infrared restorations fuse to the existing pavement, creating a continuous surface. This

eliminates the need for tack-coating the edges, enhances durability, and allows roads to be opened to traffic immediately.

Del Williams is a technical writer based in Torrance, California.

He writes about business, technology, health and educational issues.