As roads continue to fail and budgets become increasingly tight, cities, counties and states must look for alternatives to maintaining their roads. FMG, located in San Jose, CA, is one contractor utilizing a green and sustainable method to preserving roads. The cold foam in-place recycling method was used by FMG in the Monterey Road project for the City of San Jose. 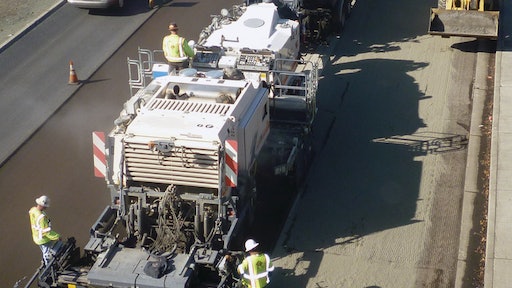 The cold foam in-place recycling method was used by FMG during the Monterey Road project for the City of San Jose.

As roads continue to fail and budgets become increasingly tight, cities, counties and states must look for alternatives to maintaining their roads. FMG, located in San Jose, CA, is one contractor utilizing a green and sustainable method to preserving roads. The cold foam in-place recycling method was used by FMG in the Monterey Road project for the City of San Jose.

The 2.2 miles of Monterey Road suffered from alligator cracking, raveling, potholes and oxidization. The city called for two bids—one using a conventional patch and overlay and the other using recycle and overlay.  Ultimately, the city chose to complete the work using cold foam in-place recycling. This method saved San Jose $400,000 compared to the conventional method.

As a result, work was reduced from 18 days down to 9 days as well as eliminating 780 truckloads of importing and off hauling materials. Another benefit to the cold foam in-place recycling was the elimination of transporting 15,600 tons of aggregates to the landfill and the purchase of approximately 15,000 tons of new AC.

FMG obtained the Wirtgen 3800CR Cold Recycler in April 2011, and the Monterey Road project was one of seven projects completed in the San Francisco Bay Area using the cold foam in-place method.

Unlike other rehabilitation options, the cold foam in-place recycling is building a new structural section. Not every road is a candidate for cold foam in-place recycling. "Some roads are failed deeper than 6 inches, have base failures or have huge depressions in the asphalt," says Mike Mc Elroy, the owner and President of FMG. "We are going 3 to 6 inches, and if you have deeper failures you will have to do something different."

Working 12.5 feet wide, FMG closed down one lane at a time. Then, crews lowered any iron manholes, vaults and other obstructions. Once those were lowered, crews began the process to complete the repair work. "We first come in and spread the dry cement on the roadway at the rate the mix design called for," McElroy says.

After the dry cement was applied, a recycling “train” was created with a water truck, a tanker truck containing PG 64-10 and are pushed by the Wirtgen 3800CR.  For this project, FMG ground up 4 inches of material and replaced it with 4 inches. The unit has a computerized pumping system that injects more or less oil and water based on the speed of the unit.

"You're pushing these two trucks and grinding up the roadway," McElroy says. "Your computerized pumping system is sucking oil and water out of the truck, and it is injecting it into the drum housing where it is grinding up the surface and mixing the materials."

When the liquid asphalt and water mix, it creates foam. "The foamed asphalt is mixed up and released out the back being put down with the screed that is hanging off the machine," McElroy says. Then, steel-drum and pneumatic rollers are used to compact the material.

Unlike typical asphalt that is finished when it is cold, the cold foam in-place material isn't finished until it is compacted. As a subcontractor, FMG completed the cold foam in-place recycling while contractor Graniterock Pavex completed the finishing work. "We compacted the material with 15-ton steel drum rollers in 3 to 4 passes often achieving 98 to 105 percent density," McElroy says. "Once we achieved compaction, we use pneumatic rollers to bring the fines up and knead it together to get the finished surface." Crews were able to complete recycling at 20 to 30 feet per minute.

Within a few hours, the surface was dried and a 10-12 hundredths of fog seal was applied followed by sand. "It is imperative to put down sand and oil," McElroy says. "The foam process leaves a crust on top, and that needs to be protected with a fog seal."

A few steps away from a conventional process

When completing cold foam in-place recycling, contractors will recognize several challenges compared to the conventional overlay process. First, it is important to properly manage the material. "Unlike paving, if you go a little too thick or thin you have to add or remove material," McElroy says. "With what we're doing we have a set amount of material. If we are grinding out 4 inches we have to put 4 inches back. If we start running out of material that means we're going too thick and if we start gaining material that means we are going too thin." To manage the material, FMG uses a screed with an electronic grade control.

Another challenge FMG encountered was managing the traffic. Unlike other projects completed by FMG, the Monterey Road had freeway speeds, stop lights and turn lanes. "The problem is you have stop lights in the middle of the job, and you have people driving 65 miles per hour to a stop,then accelerating out again," McElroy says. "When you recycle, you are putting down a granular product. It takes four hours for it to get hard and cure out." To manage the traffic, FMG would close down one lane, recycle the area, fog seal and sand it then temporary stripe the lane opening it to traffic.

Prior to Monterey Road, FMG did not fog seal the surfaces. It was during this project that McElroy learned the importance of fog sealing. "The other jobs we've completed have had light traffic volume so we didn't fog seal them," McElroy says. "We discovered on Monterey Road that you need the fog seal because we had slight raveling in the beginning. After the application of the fog seal, the raveling issue was eliminated."  Contractors will notice several differences between the Wirtgen 3800RC and standard milling machines. "The machine we are running can be converted into a milling machine within a few hours," McElroy says. "The drum that turns in a conventional milling machine is an upward cut system so the drum is spinning clockwise and will break the asphalt from underneath throwing it onto the conveyor. The drum of the Wirtgen 3800RC turns downward, in a counterclockwise rotation. If you go slowly you take small bites and if you go faster you take bigger bites." The change in cutting direction of the Wirtgen 3800RC allows contractors to manage the size of the aggregate being cut from the road.

"We're a pretty small company. We went out on a limb, and we are taking a risk on it because it [recycling] has to happen," McElroy says. "The bottom line is cities, counties and states can't afford to waste and throw away their resources anymore. They own these aggregates, and aggregates are a declining natural resource. We have to recycle not only for these reasons, but because it is the right thing to do.”