How BV-Slide helped one company reduce costs and increase performance 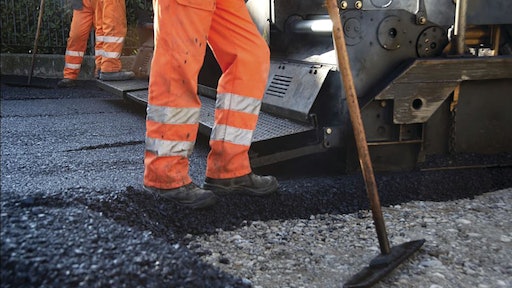 Asphalt is a dirty job, but you live it every day. When you’re hauling mix in a dump truck to a paving site, what’s left behind in the bed after a dump has the potential to create problems. Once build-up starts on a truck bed, it will continue to grow on subsequent loadings, making it more difficult to release the load throughout the day. As the build-up intensifies throughout the work day, the bed becomes more and more difficult to clean at the end of the job.

Finally, trucks with severe build-up have reduced payload as the stuck asphalt takes up space in the bed, thus reducing the volume that can be loaded on subsequent hauls.

So what can you do? Many companies have historically used diesel fuel to prevent asphalt from sticking to their trucks.  At $3.50/gallon, and an average throughput of over 100 truckloads per day, a fortune is spent on the problem.  Many states have regulations that prohibit the use of diesel fuel for this purpose and we can see why.  Not only is this option costly, it’s also not at all environmentally friendly to waste precious diesel fuel as a release agent.  In addition to environmental and cost considerations, performance and quality issues arise by using diesel. While diesel fuel does prevent sticking, it also breaks down the asphalt binder in the hot mix, which can cause problems with the new pavement

Werner Construction, based in Hastings, NE, had tried various release agents in search of an answer to the sticking and regulatory issues. They found most release agents were ineffective.

BDI then introduced their product, BV-Slide, to the company. This product, just released in 2012, uses silicone emulsion technology to form a thin temporary coating on the truck bed, preventing the asphalt from sticking. “It should be applied prior to each load, but some drivers can run several loads between applications,” says BDI Sales Manager Kraig Niemoth.

BV-SLIDE is sold primarily in pails, drums, and tote bins.  It is diluted to the appropriate concentration depending on the “tackiness” if the mix.  “Hot mixes with high loadings of rubber, polymer, and/or recycle are extremely tacky and will usually require a 1:8 or 1:10 dilution ratio,” explains Jim Buchanan, General Manager with Blue Valley Chemical. “Conventional mixes will release well at a 1:20 ratio.”

It can be applied with a standard garden sprayer, but is often either diluted on site into tote bins, or used with a proportioning system that draws the appropriate mix of water and chemical from the plants water system and the drum. Before loading, each Werner Construction truck was sprayed with BV-Slide, adjusted to the appropriate dilution. Trucks returned clean without any sticky build-up on the sides or bottom of their beds ensuring a cost effective solution, along with compliance with local regulations.

Each of the company’s’ trucks were sprayed with approximately one gallon of diluted lubricant before each load. The diluted cost of BV-Slide is about $1.30 per gallon, compared to $3.50+ per gallon for diesel fuel. Using BV-Slide, as compared to the diesel fuel, can end up saving about $50,000 per season.

Not Just for Truck Beds

Paving crews will sometimes use a release agent on the paver bin and screed to prevent asphalt form sticking.

Asphalt will stick to the compactor rollers or tires, especially when the compactor is cold, such as start-up in the morning or if sitting idle for an extended period. It is important to differentiate between compactors that have steel rollers and those that have pneumatic rollers.  A steel roller can usually just be sprayed with water and asphalt will not stick. However, pneumatic rollers will require a release agent. “If crews are using diesel, soy or orange based released agents, they are damaging these tires and will definitely see premature wear,” Buchanan adds. Adding a soap based release agent will not harm the tires, but they generally are not effective for tacky mixes.