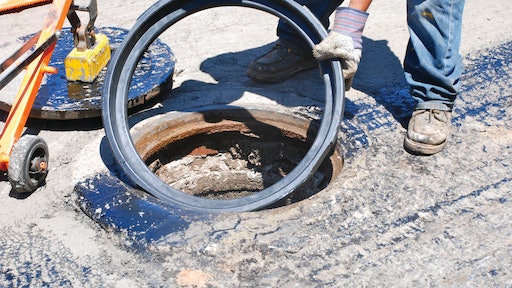 An FJ Turner adjustable riser being places during a City of San Diego overlay project.

Manholes can often be a forgotten component of your paving job. When a manhole is not raised to grade after an overlay, the surrounding pavement is more likely to be damaged.

There are materials available to help you effectively work around manholes. Without paying proper attention to these components of your paving job, a manhole could be lost or you’ll end up having to come back after resurfacing to elevate the structure.

Improving quality of overlays with risers

In most cases, adjustable manhole risers are the safest, most efficient and most cost-effective way to raise manholes to grade after streets are repaved with a lift of new asphalt. In a study conducted in 2004 by Kansas City, 11% of manholes that were raised to grade had ‘bad’ pavement surrounding it. Comparatively, over 35% of manholes that were left uneven had ‘bad’ pavement surrounding it. We all know that smoother pavement lasts longer, and longer lasting pavement is the name of the game.

“Manhole risers help to absorb the impact of traffic hitting the top of the manhole frame,” says Alan Siebenthaler from Hamilton Kent. “Without using them, you will end up with manholes that are too low, which can cause damage to vehicles, bikers or snowplows. At the very least it will be a nuisance to drivers going over them.”

Manhole risers come in a few different designs. A solid cast iron drop in riser relies on gravity and an asphalt bond to hold the product in place. Steel drop in risers do the same thing, they are just made of a different material. Expandable or adjustable risers can be made of plastic, Styrofoam or rubber. These products give the user mechanical means to lock the product in place. Adjustable risers are available in 1/4-inch increments up to 5 3/4 inches.

“A manhole riser can be a cost effective and reliable way to bring utility structures to grade when resurfacing,” says Jason Downing from American Highway Products. “They eliminate the need to come back after the road has been resurfaced to adjust utilities to the new road surface.”

Many companies do not think about the cost associated with a properly graded manhole. The amount of work involved can seem trivial compared to the overall task of repaving a road, plus work is slowed when catch basins and manholes need to be reconstructed to grade. Many companies simply choose to ignore the manholes and pave over them during an overlay.

However, that approach requires jackhammering the pavement around the casting, removing the debris, lifting the casing (requiring a separate piece of equipment), and reconstructing the supporting brickwork or concrete. Once the casting was raised and replaced the contractor had to backfill around it and repave and compact.

“At some point you’re going to have to get into that manhole,” says Frank Turner from FJ Turner Company. "If you overlay that manhole with asphalt, then have to come back and jackhammer it up, which is going to be four to five times more expensive than using a riser. It's a more cost effective way to deal with them."

By analyzing time logs and maintenance reports, some municipalities have been able to quantify the labor costs of raising manholes. In Washington, the wastewater district manager analyzed three years of maintenance records. Their method of covering the manhole at the time of paving, then returning to jackhammer, dig out the manhole frame and raise it with a precast grade ring at a later date, was costing them $500 per manhole in materials and labor. Using the same records after using adjustable manhole risers for three years, it was determined that materials and labor were decreased to a cost of $95 per manhole.

Adjustable riser rings don’t require excavation and they don’t disturb new pavement or compaction. Materials do not need to be dug up, hauled or replaced saving both time and money. Plus, Turner says installing adjustable risers is quick to learn and easy to do. Once the manhole lid is removed, the contractor needs to clean the seat and sidewalls of the existing frame. The adjustable riser is then placed inside the frame, and using a screwdriver the riser is expanded to fit tight, generally to about 60 lbs. of pressure. Once the riser is installed the contractor can put the lid back on and the job is finished.

Perhaps you have no choice but to pave now and deal with the manhole later, that's where a manhole saw can help tremendously to find, dig out and repair a manhole. The Coneqtec HS-57 Manhole Saw was specifically designed to cut out and repair many manholes in a small amount of time. "Before the Olympics in China, hundreds of manholes needed to be repaired before the games," says Kelly Guthrie at Coneqtec. They developed the HS-57 skid steer attachment and since then, Coneqtec has developed the Series II HS-57. This version cuts deeper when overlays are thicker and the re-engineered arm maneuvers around the manhole area easier.

If your crew conducts general maintenance around manholes, consider products that help take the grunt work out of lifting the manhole covers. The Allegro Magnetic Lid Lifter attaches to the manhole cover so you can easily lift off manhole covers up to 36 inches and wheel them out of the way. "Manholes can weigh 600 to 800 pounds," says Ben Matranga at Allegro. "It's important to take the brute strength out of having to move these things around."