The 3 Rs of California State Highway 137 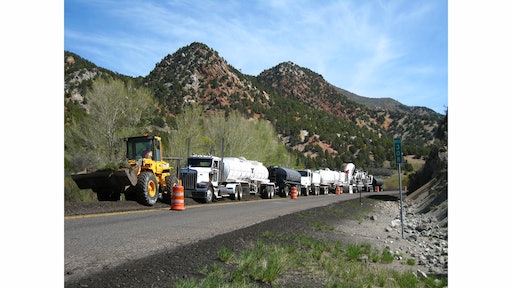 As in much of the country, road construction and repair in California’s San Joaquin Valley has become as common as a hot, sunny, dry day.   The California Department of Transportation bid out a project to renovate a 9.2 miles stretch of State Highway 137 west of Tulare, which lies about midway between Fresno and Bakersfield, in the heart of the Central Valley.  The road runs through the vineyards and almond groves, and the agricultural producers appreciate the state getting the job done between the heavy spring activity and the harvest beginning in August.

The project from the California Department of Transportation therefore gave a tight schedule to lead contractor Papich Construction, which won the $3.4 million project — along with its demanding road specifications.

Coughlin Company, based in St. George, Utah, was the sub-contractor for milling and cold-in-place recycling of the worn roadway.

Darren Coughlin is the fourth generation Coughlin at the head of the company, which has been doing infrastructure projects since 1921. Taking over in 1994, Darren converted the company from an underground pipeline company into a rotomilling, cold-in-place recycling, pulverizing, soil stabilizing, and heavy hauling operation.  With 20 years in the business, Coughlin has gained an appreciation for state-of-the-art construction technology.  The company employs 50 people.

The California Highway 137 road had aged and was displaying both transverse and longitudinal cracking.  The rehabilitation project was ideal for cold-in-place recycle (CIR).

According to Coughlin, the benefits of CIR are substantial:  He calculates that the Roadtec RT-500 mobile recycle trailer saves 30 percent in cost and 25 percent in time.  In addition, the process reduces reflective cracking, substantially improving the road life cycle.

The machine has a rating of 500 tph, making it capable of recycling miles of road in an extremely short amount of time.  It features closed loop sizing because of its onboard vibratory screen and horizontal shaft impact crusher.  This is designed to prevent the need to pre-process the RAP when it’s used as a cold-mix plant.

Using a crew of seven, Coughlin Company finished the job within the allotted ten days.  The train used was a RX 900e milling machine towing an RT 500 mobile recycle trailer, plus support equipment.

“The sub-base on every CIR project needs to be investigated to ensure it has adequate support for the CIR material,“ Coughlin stated.

One special milling challenge on the California Highway 137 project was the existing paving fabric on the roadbed.  Said Coughlin, “we decreased the recycle depth about one-half inch to keep from milling up the fabric. Fortunately the equipment has the sensor and control capabilities to make fine calibrations of cutting depth.’

Twenty-five thousand tons of reclaimed asphalt pavement were produced in the project.  Quite a harvest, and almost all of this was CIR, with other milling done only in areas not accessible to the train, such as turn pockets and some intersections.

“I was glad we had the availability of the conveyor configuration on the RX-900e cold planer,” Coughlin said. “Roadtec milling machines offer 60 degree conveyor swing, which allowed an easy feed to the RT-500.”

And when the situation doesn’t call for CIR, the machine does duty as a cold mobile mix plant.  “It’s nice that the RT-500 recycle trailer can be set up to make cold mix from our RAP stockpile using emulsion or foam. Of course, we have options to add cement or lime if required.” The RT-500 also has a weigh bridge on board, which is designed to ensure accurate additive injection in the pugmill.

Coughlin Company is an early adopter of the machine. “We placed the order for the first RT-500 CIR machine ever built in 2008. Since then, we’ve recycled 1,200 lane miles with the trailer.”

So, all told, the milling of the 9.2 miles stretch of State Highway 137 was a relatively painless process.  Ask him to imagine completing the job without the CIR machine, though, and Coughlin has one word to describe that feeling:  “Painful!”