The middle of the season might not be your ideal time to buy, but some tools and wear parts should be on your mid-season replacement radar. Here’s what to replace and what can wait. 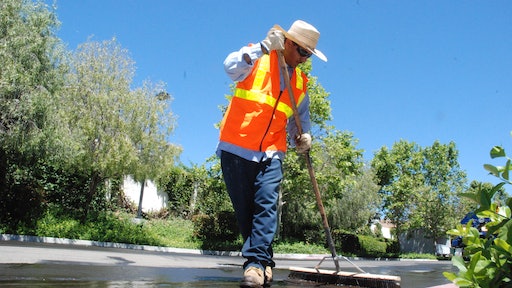 “In order to lay the best product down, one that’s going to perform well and last, you need to have tools that are in top shape,” says Jon Bongiovanni vice president of sales at BonTool.

We all know the age-old saying: ‘if it’s not broken, don’t fix it.’ Well, just because something isn’t broken, doesn’t necessarily mean it’s working to its full potential. And in the heat of the summer and your busy season, taking time to inventory your worn-out equipment is not high on your to-do list.

However, there are some items that should be replaced immediately when they start to get worn out. We asked contractors what they most often need to replace mid-season and got some tips from the manufacturers about making the purchase.

Your safety equipment might be the last thing you think of to replace mid-season, but what’s more important than keeping your crew safe? When cones break or barricades fade, their effectiveness to alert the traveling public diminishes. These items should be one of the first items on your list to replace when this happens.

“If your safety cones are drooping, cracked or split, they should be replaced,” says Gregory Driskell, president of Professional Pavement Products (PPP). “Also, if the cones have heavy asphalt or sealer build-up on them, they are not as effective as when they are clean.”

The same is true for your barricades. If they have broken panels or the sheeting is worn off, they are no longer reflective for night visibility.

“Cones and barricades protect the jobsite from the public as there will be less tracking and damage to uncured sealant or paint,” Driskell says. “Similarly, they protect the public from the jobsite and your workers. Cones and barricades allow for less damage to vehicles, the surrounding facility and help prevent hazard (skip/fall) to pedestrians.”

Driskell says replacing these items not only provides added safety to your workers and the traveling public, but it also gives your company a more professional image. As customers approach a jobsite with your logo on the barricades, they will have a much better image of your company if the safety measures are clean and presentable.

When replacing these items, be sure you look for quality items, instead of a low cost. Driskell says cones should be made of durable, flexible material with a lasting vibrant color and reflective sheeting.

Your shovels, squeegees, lutes and other hand tools are the bread and butter of your productivity. It’s pretty obvious when these need replacing – most of the time they’re broken and unusable by your crew. Sometimes though, these tools can show wear on your jobs before they actually break. Replace them to improve job quality.

“In order to lay the best product down, one that’s going to perform well and last, you need to have tools that are in top shape,” says Jon Bongiovanni vice president of sales at BonTool.

When it comes to squeegees, the better the rubber at the bottom of the blade, the better seal you’re going to get.

“Obviously you’re running your rubber squeegee over asphalt, a rubber material,” Bongiovanni says. “Eventually you’re going to start to get shredding at the bottom. This is one tool you want to make sure is clean and fresh to ensure you’re getting the best seal.”

Bongiovanni says in order to maximize your job performance, you should also make sure you have the best tools on hand for the job you’re working on.

“Guys will sometimes take shortcuts on jobs,” Bongiovanni says. “Maybe they make a tamper out of a piece of wood, and that’s fine, it might get them through the day. However, making that initial investment, getting something that’s going to last, is going to make your day easier.

“Too often when you try to hand make something, it ends up breaking in the middle of the day causing delays that leave you scrambling on a jobsite.”

Bongiovanni recommends looking at your tools each day before the job starts to make sure they are in good shape, as well as taking a mental inventory at the end of the day to see if anything is starting to wear out or has broken.

“If you really want to make sure you’re doing something the right way, so that it’s done professionally, it’s good to take the time ensure that the product you put down is of high quality and going to last the longest, and that starts with your tools,” Bongiovanni says.

You may think your stencils are indestructible. You throw them down, paint on them, drive over them, and then throw them back in the truck for the next job. However, manufacturers warn you need to be careful with your stencils and watch them closely for wear in order to ensure you’re giving your customer a high quality paint job.

“It's obvious to the customer when you have stencil problems,” says Robert Liles president of Robert Liles Parking Lot Services. “A professional job does not have irregular edges.”

This is the sign of a worn out stencil that should be replaced. Liles says early warnings about stencils needing replacement is if they are getting brittle around the edges. “Almost nothing will damage a poly stencil except sunlight,” he says. “When they are brittle it is a warning that they have been left out in the sun and may break soon.”

Liles says pay close attention to your most used stencils for wear. Handicap stall, arrows, no parking and fire lane stencils should be replaced as soon as they start showing problems.

“Often you can temporarily fix a broken stencil with duct tape,” Liles says, “but this is temporary and you will begin to spend more time fixing them than the cost of replacement.”

When you do buy new stencils, Driskell says look for stencils that are common sizes for your region so you get the most use out of them and be sure that they are flexible, thick, non-stick and have a good warranty.

You also need to take care of them so that they last Liles says. “Keep them clean and don't store them in the sun. About the only thing that will damage poly stencils is sunlight.  Paint and thinners won't hurt them, but mistreatment will.”

Replace Before it Breaks

Preventative maintenance is huge when it comes to protecting your equipment investment. Your stripers, sweepers, pavers and skid steers all have wear parts that should be checked regularly throughout the season to make sure they’re working correctly. Replace these wear parts now or make a larger, most costly repair later.

In order to keep machines like skid steers running at optimal productivity, wear parts like tires, bucket cutting edges, and work tool teeth should be checked and replaced when worn.

Brown says newer systems can keeps track of service intervals and notify the operator when service is due.

“For work tools that don’t record runtime, the machine display can be used to track hours used per tool making it easier to know when to replace items such as worn bits on a cold planer,” Brown says.

Broom bristles are also another common item that need replacing if you’re using your skid steer in a sweeping application.

"Using a broom past it’s life span results in reduced performance and may require more sweeping passes," says Perry Stenzel, product manager at United Rotary Brush Corporation. "For brooms, a good rule is when the broom is worn down to ½ the original bristle length, it is time to replace."

“The Work Tool Positioner allows an operator to set the tilt angle of the broom, and then return it back to the same position each time he performs this task,” Brown says. “The value in maintaining the angle is consistent bristle wear, and less time spent dialing in the right tilt and down pressure that optimizes productivity while minimizing bristle wear.”

When looking to replace these items, Brown says “Like most things in life, you get what you pay for. Sourcing genuine parts through your dealer ensures the best quality and longest life compared to cheaper alternatives.

“It comes down to life cycle cost, and most of the time a higher grade, more expensive part costs less over the long run and keeps the equipment running longer.”